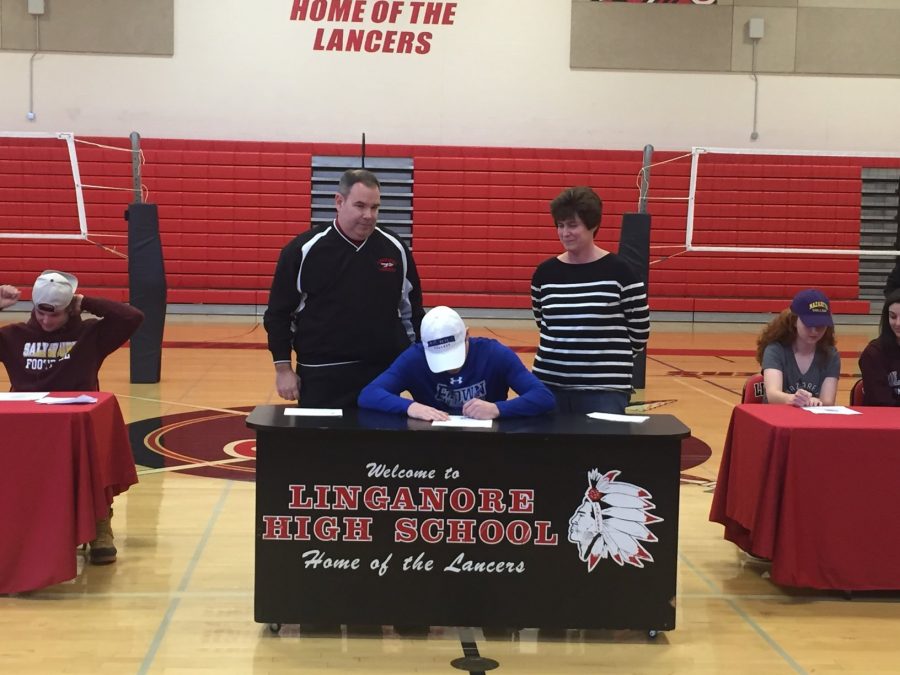 by Grace Brooks and Emily Reed

Michael Rajnik, a center fielder and four-year varsity starter, signed his letter of intent to play baseball at Elizabethtown College. Rajnik has been playing baseball since he was five and his father, Mike Rajnik, put the baseball in his hand.

“My father has always been my biggest supporter,” said Rajnik.

Rajnik earned the 2015 Honorable Mention FNP Team for Baseball, Starting Second Team for FNP in 2016, and was a part of Linganore’s Regional Championship and Finalist teams.

In the offseason, if there is one, Rajnik has to juggle basketball shootouts, 7-on-7, and baseball showcases.

“He’s committed to the Linganore Athletics Program and goes above and beyond,” said Conner.

But his heart is in baseball. At a summer baseball showcase, the Elizabethtown coach reached out to him and asked if he was interested in playing baseball for the Blue Jays.

“He looked at a lot of different schools, and this is the one that is the best fit for him. We helped him find schools in the major he wanted, which is biomechanical engineering, and then we drove him to visit the schools. He made the decision on his own,” said his father, Mike Rajnik.

“The campus is nice. It’s not too far from home and it’s close to Hershey Park. The people are welcoming and the campus has great programs for baseball and engineering,” said Rajnik.

His parents’ aren’t worried about how he’ll balance sports and academics. Along with playing three sports, he is in the top 10% of his class and takes AP and dual enrollment at FCC.

“We are very proud of him and all the hard work at Linganore has paid off. He’ll be able to keep playing sports in college and study at a competitive university,” said Mike Rajnik.

“Mike was a freshman my first year, and I’ve seen Mike grow over the years. He never once complained, never once looked at someone else and thought that should be him out there. He put in the hard work in the weight room, classroom and on the field to earn his spot on the team. I can’t say enough good things about Mike!” said his baseball coach David Keiling.

“Elizabethtown got a really good one, and, Mike, we’re going to miss you,” said Coach Keiling.