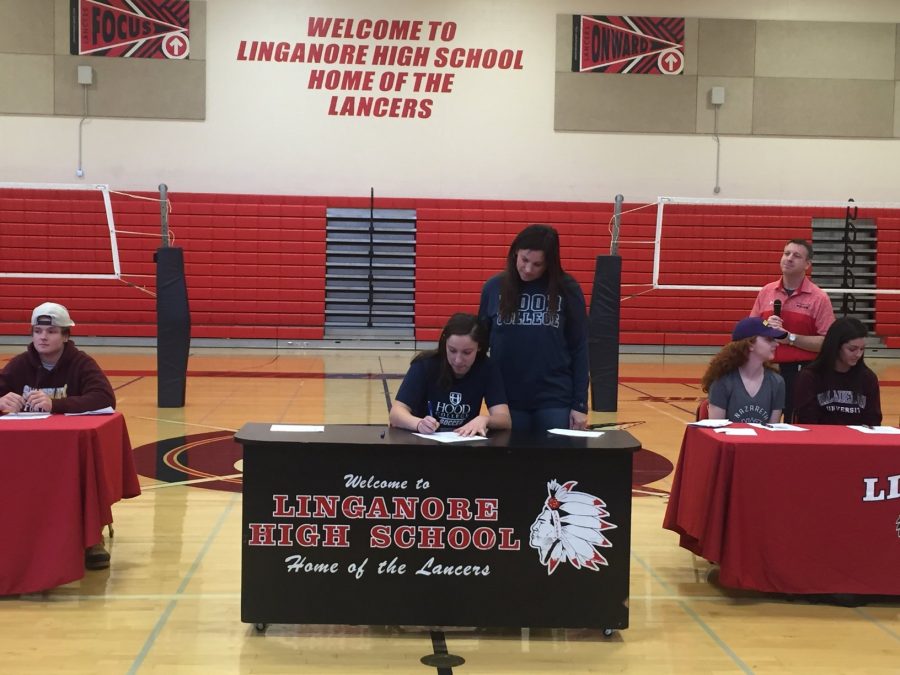 by Alex Ismael and Tory Spruill

February 1st – Grace Weaver signed to Hood College to play for the Blazers’ soccer. Weaver has been a part of the varsity team for four years.

This season, Weaver was a starting central defender. Previously, she had taken on the positions of center mid and outside wing. In her club teams, she has always been a starting center midfielder.

Weaver was part of the FC Frederick club team for three years. In her sophomore year, she moved to the United club team. United is a club team also, based in the Tuscarora region.

“I’m not worried about her getting hurt. She may hurt somebody else,” Jim Brown, Grace’s grandfather.  He was referencing the time that Grace accidentally kicked too hard and caused the opposing player to break her leg.

“She is a strong leader and relentless on the field. But also knows how to have fun on the field,” said Howard Putterman, coach of the varsity soccer team.

Weaver was JV captain in her freshman year, occasionally playing on varsity when needed.

“I’m looking forward to her being able to travel to other schools and experience college life as a student-athlete,” said Amy Weaver, Grace’s mother.

She likes having the advantage of knowing the area because she will be able to show friends around Frederick.

“I am really excited to go to Hood because of the proximity to Washington, D.C. and the internships that will be available to me because of it, “ said Weaver.

Weaver also plays lacrosse at Linganore and has started on Varsity for the past three years. For lacrosse, she was recognized by the Frederick News Post for the All-County Team. Weaver is also hoping to play lacrosse at Hood College.

“I’ve heard the coach [Conor Prachar] has grown the soccer program. I’m looking forward to playing in his program,” said Weaver.
The Blazers had a soccer record of 3 -12 and 2 and a lacrosse record of 4-13.