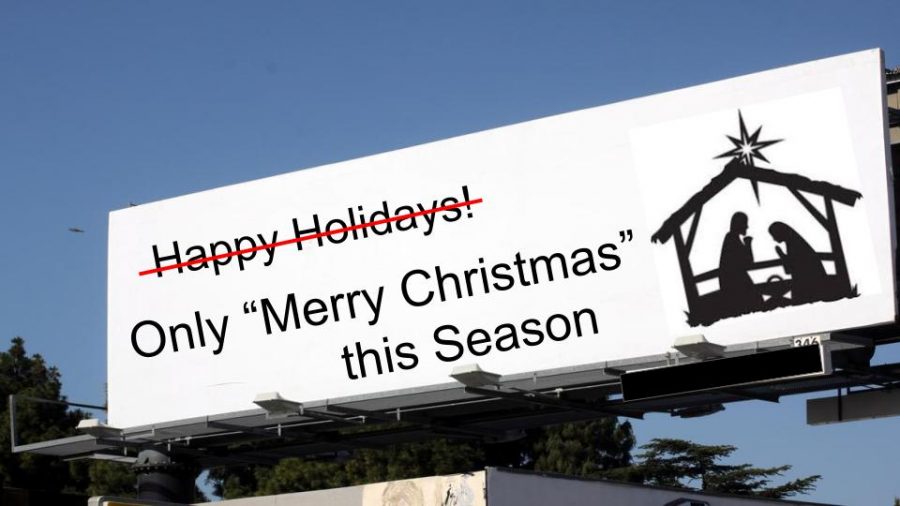 Merry Christmas to all, not just Christians

Are you offended? Of course not.

What is this “war” that we fight during this season every year? Can’t we agree that “Merry Christmas” is a neutral greeting?

According to a New York Times article, the “War on Christmas” started in 2005 because of a book written by John Gibson, called The War on Christmas: How the Liberal Plot to Ban the Sacred Christian Holiday Is Worse Than You Thought.

Gibson, a conservative, claims that liberals are trying to remove religion from Christmas. I believe in Santa Clause, but I don’t believe in this ridiculous conspiracy theory.

“I, for one, want the opposite — I want this season to be a time of peace between politicians, and all people.””

In a year where we are all so exhausted from political fighting, can’t Christmas be a time of truce? During World War I, in 1914, the fighting stopped between the German and British troops to celebrate Christmas together.

Shouldn’t we have a war on extreme liberals and conservatives who have nothing to do but accuse each other.

I, for one, want the opposite — I want this season to be a time of peace between politicians, and all people.

I want to see Congress Christmas caroling through the streets of D.C. together and maybe even sing some Hanukkah songs.

Shouldn’t we be focusing our time on other conflicts, like the possible nuclear war that could happen with North Korea, the suffering of the Syrian exiles, or the poverty and destruction in the wake of the hurricane in Puerto Rico.

In 2017, Christmas is  commercialized. It no longer has as much religious context to it as it used to. Most people view the holiday as a time for presents, trees and stockings.

As a devout Christian, I celebrate the religious side of Christmas, but this is not the case for most people, and I don’t blame them or feel personally attacked.

Some argue that a “Merry Christmas” sign posted outside of the Nallin Gate at Fort Detrick in Frederick, shouldn’t be posted because it goes against the separation of church and state.

I think the sign at the gate means “Peace” or “Have a Nice Holiday” or “Share Some Love.” These are all things that I think everyone could agree are important  during this season.

There are many people who can’t afford a holiday. Simply donating toys, making meals or giving blessing bags, can shine a light and help spread the joy during what could be a dark holiday for many — Christians, Jews, Muslims or agnostics.

We should join together to make this holiday a merry one for all — “Merry Christmas” belongs to all, not just Christians.

Holiday decorations and U.S. law: keep church out of state

by Beau Cameron, Co-Editor in chief 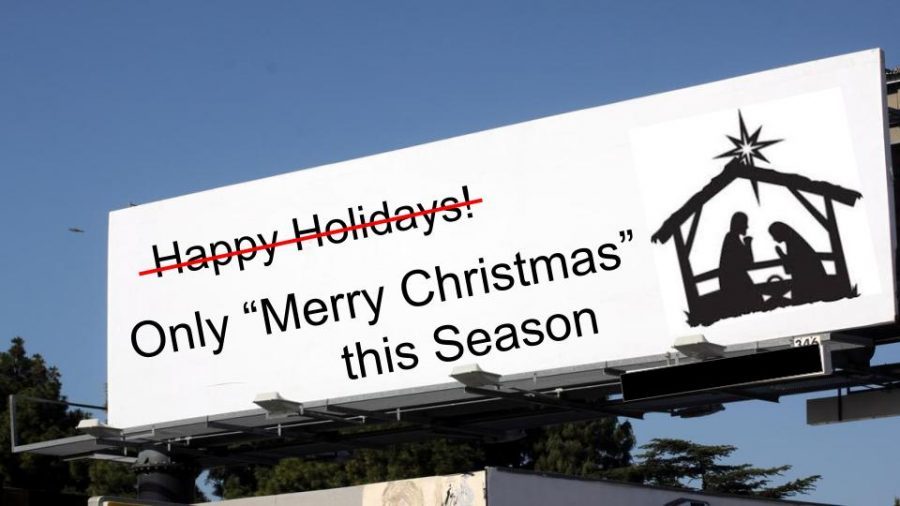 In December, it’s easy to take in the lights and trees with wide, child-like eyes. It’s easy to overlook the flood of Christmas-themed decorations in our area. So when Fort Detrick in Frederick, MD, placed a light string on their fence to spell out “Merry Christmas,” it’s just another pretty decoration, right?

Except, it’s not that simple.

A recent court case in Washington, D.C. brought a similar issue to light. The Archdiocese of Washington, D.C. sued the Washington Metropolitan Area Transit Authority (WMATA) after they refused to sell advertising space on D.C. buses to the ADW and display their religious themed ads. The court ruled in favor of the WMATA, saying that they had the right to turn down the ad due to their recently instituted guidelines against all “issue-oriented” advertising.

“In 2015, WMATA changed its advertising policy to prohibit issue-oriented advertising, including political, religious and advocacy advertising,” said Metro spokeswoman Sherri Ly in a statement. “The ad in question was declined, because it is prohibited by WMATA’s current advertising guidelines.”

That case is open and shut, but it brings up a bigger issue: Can religious decorations be displayed on government property?

The ADW filed a suit in federal court, asserting that WMATA’s rejection of the ad is “hostile to religion” and violated the Archdiocese’s right to freedom of speech. But this isn’t an issue of free speech–it’s a matter of separation of church and state.

If the D.C. police had told the ADW that they were not allowed to post these religious themed ads on their own property, then this would be a violation of free speech. If the government wishes to maintain the laws ensuring separation of church and state by not allowing a religious group to promote their beliefs on government property, then that decision is upheld by the constitution. It would be illegal for the government to do otherwise.

Christmas tradition is rooted in Christianity. America has used religion as a way of bringing people together under a common flag: during the Cold War, Christianity spread throughout the country and was even supported by Congress when “one nation, under God,” was added to the Pledge of Allegiance.

Under the Obama administration, the White House honored varying religions. The presidential family sat down for a Passover Seder every year, and Obama, like presidents Bill Clinton and George W. Bush before him, has hosted Iftar dinners to mark the Muslim holiday of Ramadan. However, during the winter holiday season, the White House is Christmas-centric. The Obama and Bush administration both said “Happy Holidays” on the White House cards, but they both also wished the nation a “Merry Christmas” as a whole. Trump has decided to take a less politically correct approach, by boldly proclaiming “Merry Christmas” on the official cards.

In no way am I trying to argue that people cannot put up Christmas decorations. If it’s in your front yard, on your apartment door, or inside your home, you have the right to promote whichever holidays you wish. It’s your property, and you have a right to control how it is decorated, just like you have the right to plant a garden behind your house.

Fort Detrick is not a home. It is a government office and military base. It is also not an individual; while President Trump is allowed to wish the nation a “Merry Christmas,” Fort Detrick cannot.

We cannot treat the government as an individual. Individuals have the right to freedom of religion, the right to promote one religion over another, but the United States government is a secular institution. If the government would like to wish the American people as a whole a “Happy Holidays,” then it can say so. “Merry Christmas,” fails to include Jews, secular individuals, Muslims, Buddhists, and the millions of non-Christian United States’ citizens. It fails to follow First Amendment regulation.

Donate to The Lance
$100
$500
Contributed
Our Goal
Submitting donation...