by Nicholas Stephan and Lauren Hall 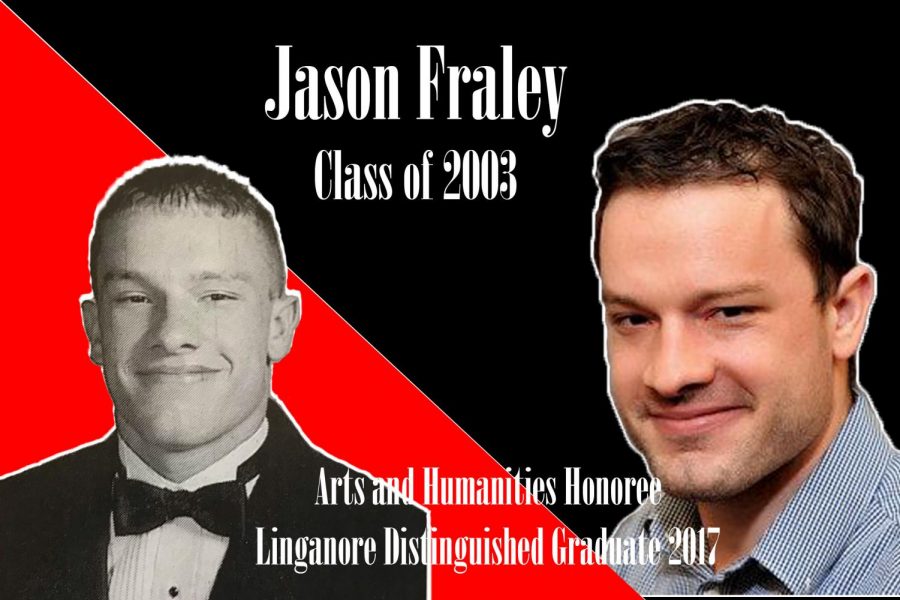 Class of 2003’s Jason Fraley can name any Oscar nominee or winning film of any year from the 1940’s to the present.

During the 2017 Distinguished Graduate assembly, Fraley received the Arts & Humanities award. Fraley works as an entertainment critic for WTOP.

Fraley has been a journalist at WTOP News since 2008 and a film critic since 2011. He keeps up with movies, theaters, and concerts. On Fridays, Fraley goes on TV on NBC4 and does previews for entertainment events around D.C. for the weekend.

“I love my job because I never feel like I am going to work a day in my life,” said Fraley.

After the ceremony, class visits, and luncheon, Fraley visited with Coach Conner, who was getting ready for state football competition.

Coach said, “Fraley was one of the more amazing student athletes I’ve ever coached. He was always 100% in and he never did anything without doing his best.”

Coach and Fraley reminisced about the 2003 run for the state title, which, ironically, started Fraley’s journalism journey.

Fraley’s parents, Anita and Mike Fraley, said, “Growing up, Jason and his brother always made film spoofs. Their first film was a spoof on Home Alone called ‘Boy by Himself.'”

During his speech, Fraley reflected on the impact Linganore had on his pursuit of his career.

Fraley said the three most important things he learned from Linganore were “journalism, show business, and competition.”

Fraley gave three points of advice to incoming freshmen: “Put away your phone; push your comfort zone; and remember where you came from.”