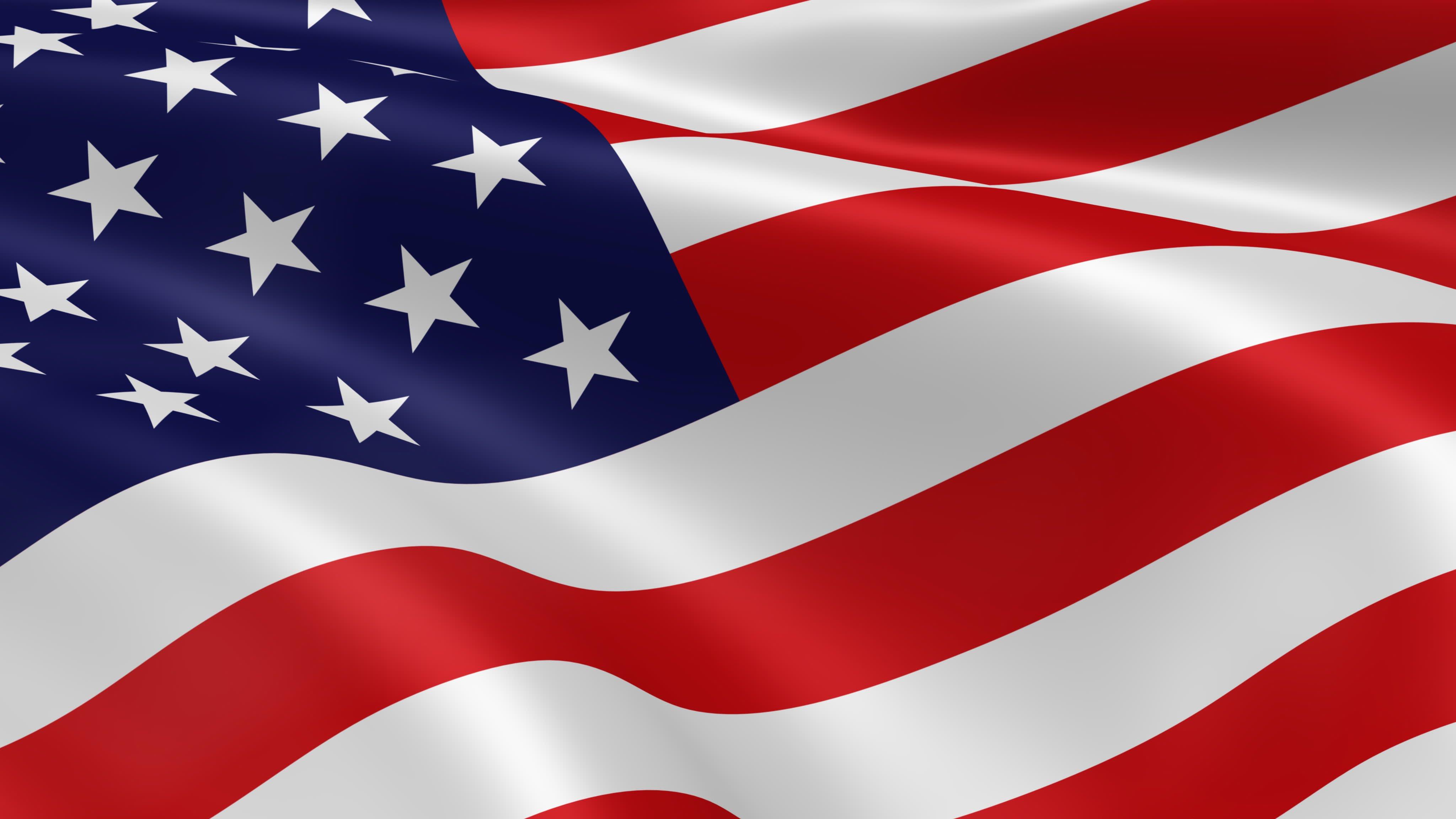 The Pledge of Allegiance: To stand or not to stand

Veterans Day is every day: Why I stand for the Pledge 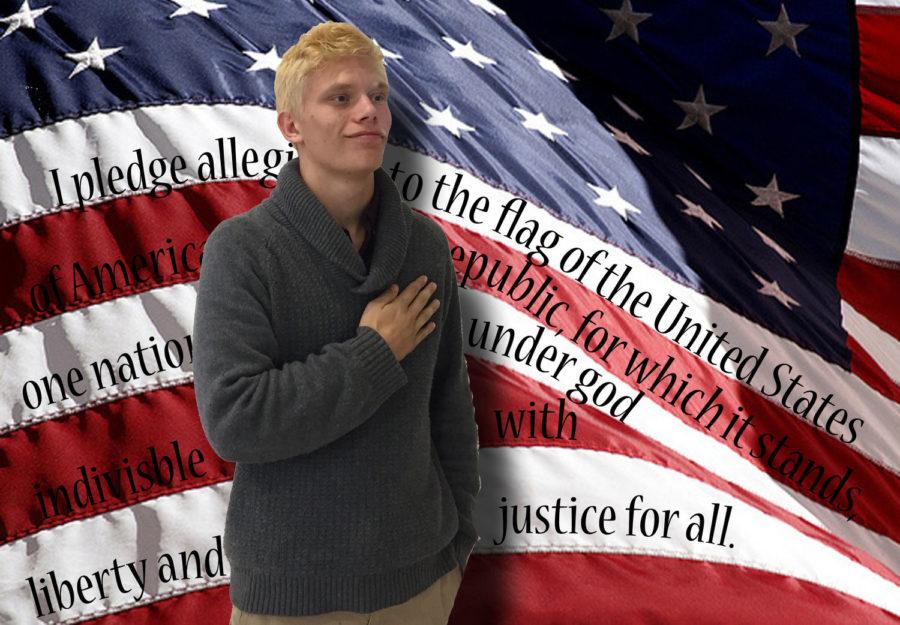 Brandon Cooper stands for the pledge.

With police brutality, the election results, and the frustrating way the country is (or is not) operating, I completely understand why some choose to exercise their right to sit during the Pledge of Allegiance. In fact, I wouldn’t be surprised if some wanted to lay on the floor during the Pledge.

I believe that it is respectful to stand for these few seconds–11 seconds by my calculation. Respect should be a social norm, and I believe that standing for the Pledge is a good start. I am not standing because I support the wrongs in our society.  I stand out of respect for what is right.

I stand for the good.

I stand for the Sentinel who guards the Tomb of the Unknown Soldier. Rigorously trained, and alone, the guard paces back and forth in front of the tomb. Through rain, sleet and snow they guard the tomb selflessly.

Each guard goes through an intensive training cycle including uniform preparation, knowledge, tests on weapon manuals, ceremonial steps, cadence, military bearing and orders. All of this ceremony honors the dead and illustrates the respect they have for their country.

I stand for my brother, an Airborne Paratrooper for the US Army, who has made over a dozen jumps out of an airplane preparing to be deployed wherever his country needs him. He spends countless hours training, guarding posts and preparing to risk his life.

While stationed at Fort Bragg, LHS Class of 2015 Chris Cooper, goes through physical training, land navigation, practice at gun ranges, and, recently, he tried for his Expert Infantry Badge.  If he can stand for hours to keep me safe, I can stand for 11 seconds.

I also stand for my mom, Christy Cooper, who spent eight years in the military working as a critical care nurse, including a 10-month deployment to Afghanistan.

She worked at Camp Bastion helping soldiers who were severely injured on the battlefields fighting America’s enemies. One difficult experience was caring for Marine Corporal Timothy Donley who, only 19 years old and in the military for less than a year and Afghanistan for less than 30 days, needed to be given 72 units of blood after being injured by an IED (improvised explosive device).

While Donley was clinging to life, my mother helped save this man who lost both of his legs and almost lost his arm. They were later reunited in the Wounded Warrior ward of Walter Reed hospital. His mother ran to mine and thanked my mom for saving her son.

Respect for these sacrifices and for the good in our country is needed. Slogans such as “Hillary for Prison” and other disrespectful remarks displayed in public show that this country is in dire need of respect. The recent presidential race is substantial evidence of the lack of respect and how much we need to improve.

In the classroom, respect is necessary, and a simple act of standing for the Pledge is a start. For classroom functionality, respect is at the core. The teacher must give respect to the students while also receiving respect from those students. Without this positive attitude, learning could not take place.

Standing for the Pledge has always been a sign of respect for the freedom we have and an opportunity to realize from whom and how we received that freedom. For those reasons I will always stand.

Why I don’t stand for the Pledge of Allegiance 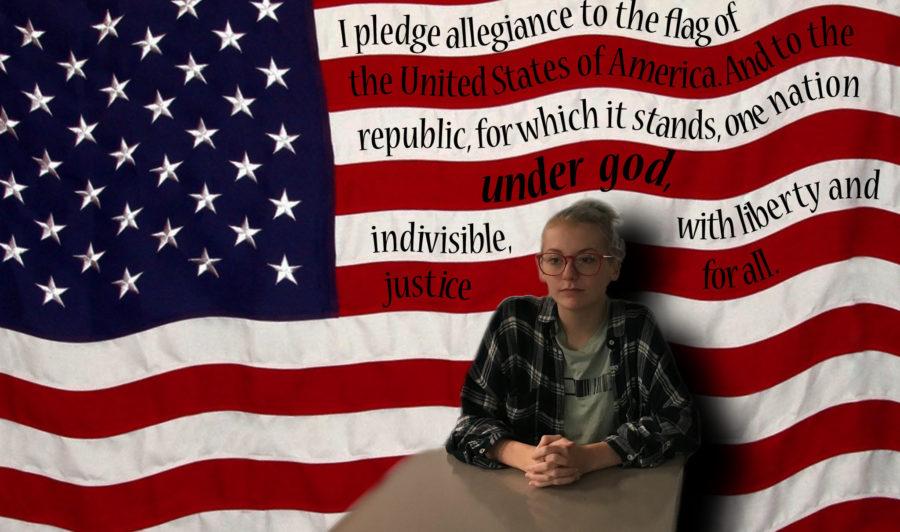 Summer Etzler sits for the pledge.

Ever since the beginning of my junior year, I stopped standing for the Pledge of Allegiance. I was hesitant to do this because I was worried about what others would think of me. I knew it would be a risky protest, but I want to make others aware of why I am protesting.

There has been a controversy in the media about 49ers quarterback, Colin Kaepernick, who in the beginning of September kneeled during the national anthem and continues to do so. In an interview with NFL media after the game, Kaepernick explained why he took the actions he did.

“I am not going to stand up to show pride in a flag for a country that oppresses black people and people of color. To me, this is bigger than football, and it would be selfish on my part to look the other way. There are bodies in the street and people getting paid leave and getting away with murder,” said Kaepernick in the interview with NFL media.

I stopped standing for the pledge last year and just recently stopped standing for the national anthem when I heard about Colin Kaepernick doing the same thing. One reason why I stopped standing is because we’re never taught what the Pledge of Allegiance actually means. We start saying the Pledge of Allegiance in kindergarten. We’ve been saying it for so long, I think we’re saying it without knowing why. It’s just something we say every day because it’s a social norm. I think we should be educated about the pledge and then have the choice whether or not we want to say it instead of standing at such a young age without knowing what it means.

Another reason why I stopped standing was because of the line in the pledge “One Nation Under God.” I think this is discriminatory towards people who don’t believe in God or believe in multiple gods.

“One Nation Under God” was added by Dwight D. Eisenhower in 1954 because of national fear of the threat of Soviet Communism. We no longer live in 1954. I think this part of the pledge helps extremist politicians and preachers validate that those that don’t believe in God don’t belong in America.

“Liberty and justice for all” is not provided for minority groups in America. For example, members of the LGBTQ community are refused service in some areas of the country. Also, immigrants who live in Louisiana can’t get married. There are also injustices against African Americans and other races who aren’t white. Some include recent shootings of Freddie Gray, Laquan McDonald, and Samuel Dubose.

Many people have called me out for sitting for the pledge, including teachers. The question I get asked often by other students is “Do you hate your country, is that why you’re not standing?”  No, I don’t hate my country. I’m one of the privileged people in this country because I’m white, my family isn’t poor, I get my education, and I rarely face discrimination. So how could I hate living in this country? I just don’t agree with positions our government and our society have taken.

What I hope to achieve when I sit for the pledge is to make other people aware of why I’m sitting. I like when people ask me why I sit so I can educate them about my concerns with this country and hopefully make them look at things from another point of view. I want this country to be more progressive in working towards equality.

I don’t think I can solve the world’s problems just by sitting for the pledge and national anthem. However, I do think sitting makes more people aware of issues in America. I want people to try to be open minded and educate themselves about equality in this country. I think the more people who work for equality, the more likely we can make a difference.