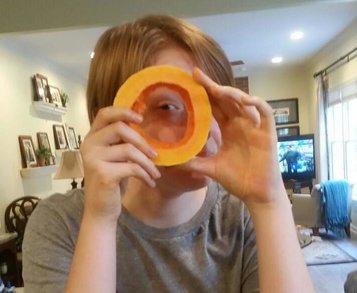 Lancer Kitchen is SQUASHING away carnism!

The most difficult thing to make was definitely the stuffing, simply because of the long preparation it requires. You can find the original recipe at food network.

All you need is…

Cubing the squash takes the longest, but this time can be cut if you have two people working. The original recipe says that it serves six, but you end up with tons of stuffing. We doubled the recipe and ended up with more stuffing than we knew what to do with.

Done and delicious. Reed and I may have ended up with too much stuffing, but we certainly enjoyed the leftovers!