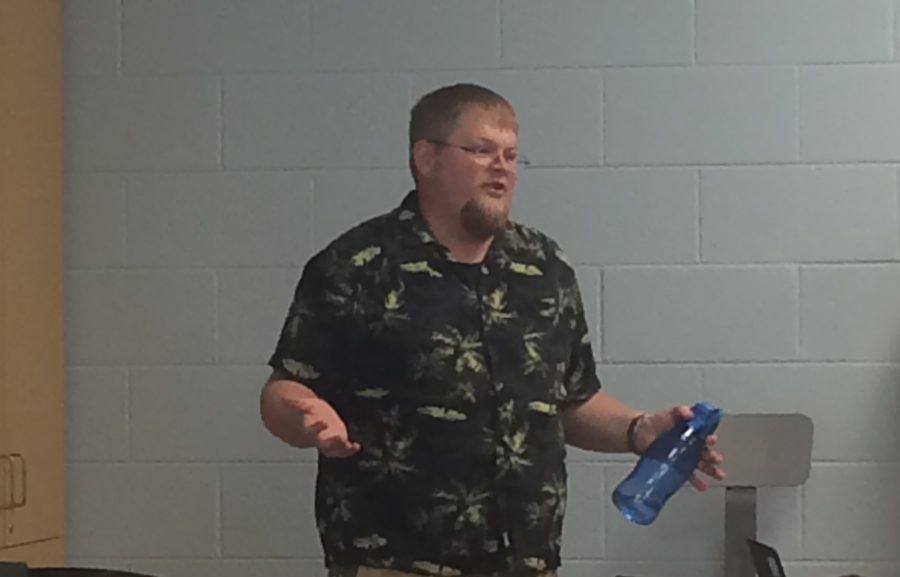 Welcome to LHS: Kronk blends technology with a love of literature and films

by Elizabeth Anderson and Grace Gaydosh

Mr. Matthew Kronk, one of four new English teachers, likes to consider himself an adventurer even if he hasn’t traveled much. From delivering papers to working in a steel mill, he seems to have tried many job and career paths.

Growing up, Kronk never really thought about being a teacher. He spent two years at California University in PA without a major, but in his junior year, he tried teaching and felt it was a natural fit. This will be his tenth year with FCPS.

“I’m looking forward to teaching students who want to be in class,” said Kronk. When he taught at Heather Ridge, his job as a teacher also involved mentoring. He is proud that he helped students in crisis avoid bigger mistakes.

What about the other side of the desk.  What was he like as a student?

He was the type of person who created his own crowd. His crowd included “kids that would be like the nerdy kids, kids that were even like the jocks,” said Kronk.

Kronk enjoys going to flea markets, writing, bowling, and watching movies. He claims to own almost 700 films and especially loves those with catchy soundtracks, like Marvel’s Guardians of the Galaxy.

Another favorite pastime is visiting with his family; although most of them are in western Pennsylvania. “Home” is important and he wants others to feel at “home” in his company.

He would love to travel more, especially since he has never been on an airplane. The farthest Kronk has been is Niagara Falls.

“I need to go other places,” Kronk said. If he ever got the chance, he would drive the Alcan Highway, a 3,000 mile stretch of road between Canada and Alaska that was unpaved until just a few years ago.

Along with this trip, Kronk is interested in traveling to New Zealand to see Hobbiton (part of the set of The Lord of the Rings movie series) or going to Sidney, Australia to visit the opera house or some of the unique aquariums.

Kronk’s ninth grade English classes are part of the 1:1 blended learning pilot at FCPS. This is a great fit for him because he has a wide array of knowledge and a passion for computers and technology.

“[Mr. Kronk] is knowledgeable and enthusiastic about his subject, and he shares his enthusiasm with his students,” said co-teacher Jane McKenzie. “He works hard for his students, and they respond positively to his lessons each day!”

This story is part of Lancer Media’s fall series welcoming new staff.  We enjoyed learning about many teachers and apologize that we were unable to cover every new teacher.