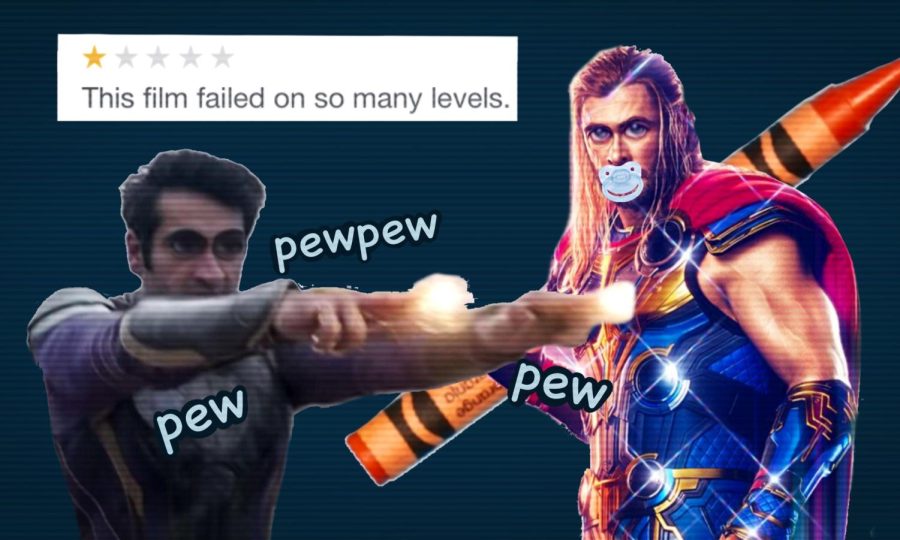 An edited image depicts “Eternals” character Kingo shooting laser beams from his fingers and Thor altered to resemble a toddler with a pacifier and a crayon in lieu of his axe. Reflecting the poor quality of their respective movie

The Marvel Cinematic Universe (MCU) has always been a model for interconnected movies. The Infinity Saga comes with a very long storyline that extends across 23 movies and ends  with Avengers Endgame.

Since the Infinity Saga has ended, the recently dubbed Multiverse Saga has released movies and TV shows that have been very subpar when compared tot the Infinity Saga standard. The most severe examples of the decline in Marvel offerings are “Eternals”, Thor: Love and Thunder, and Dr. Strange and the Multiverse of Madness.

As the first movie, “Eternals” set the precedent for the Multiverse Saga. Unfortunately,  that includes poor storytelling and underdeveloped characters.

The “Eternals” is about a race of immortal beings sent by gods, the Celestials, to live on Earth from the beginning of human civilization. The 10 Eternals decide to go their separate ways and hide their powers to become a part of the human civilization they were sent to protect. Years later, the Eternals must come together once again to stop a Celestial from destroying the Earth.

The Eternals’ names are Ikaris, Serci, Ajax, Sprite, Gilgamesh, Thena, Druig, Makkari, Phastos and Kingo. This alludes to the fact most of the MCU’s ancient myths are based on the “Eternals.” This could be an interesting concept, just not for this movie. In fact, it is never used in a major wa, or really even mentioned again. This seems to be a theme for the film itself.

The movie’s visuals are great, and the CGI is realistic and smooth. While the visuals of this movie are very impressive, the introduction and everything else about this movie is terrible.

The movie’s main character is Serci. The other nine Eternals are “developed” by making each character into Serci’s sidekick to give them their fair share of screen time. This leads to poor character-development.

This movie is the first Marvel movie to have an openly gay character, Phastos, and a deaf character, Makkari. Marvel fails to capitalize on the opportunities to truly develop these characters.

Take Makkari, the deaf Eternal, for example. Her power is that she can run very fast. This is the only character development she gets; there is no challenge for her to overcome, no hardship to endure. She is just deaf, can run fast and has a quick fight scene or two.

The impacts that “Eternals” had on the larger MCU is limited. There is a Celestial head that now exists in the middle of the arctic. It turns into an Avengers base from the comics that is only known to very devoted fans.

“Eternals” is not just a bad MCU movie; it is just an underwhelming flick in general.

“Thor: Love and Thunder” is arguably one of the worst MCU movies to-date. Taika Waititi, director of both this movie and “Thor: Ragnarok,” entirely failed to live up to the latter movie’s success.

Waititi transformed the Thor character from an overly serious, unfunny character to a character with a perfect balance of seriousness and dry humor. Now, the character has become a flanderized funny man who does everything for laughs.

This change to Thor affects not only his character but also the entire movie itself. Anything serious that happens in the movie is immediately played off for laughs.

For example, when Gorr attacks New Asgard, he has Thor pinned in a pretty serious life-or-death situation. Thor goes from a confident badass into a baby-talking idiot and says “That’s really sharp” for basically nothing but pointless, unfunny laughter.

In this movie, the costume design for Thor is also rather disappointing. The first costume of the movie is a 90s rocker look, as pictured in all of the promotional material, which is fun for about two seconds before one realizes how silly it looks. Then, there is this beautiful costume that is very Viking-like with fur and metal, which is very satisfying; however, this look is swapped out for a bland action-figure-esque costume design.

There is only one saving grace of this terrible movie. The villain Gorr, played by Christian Bale, is absolutely terrifying. With an evil laugh that just echoes through one’s head, his mission and philosophy is both relatable and fear-inducing.

Questioning one’s faith is very human and something many people deal with after the loss of a loved one, such as in Gorr’s case.

Yet, this movie goes and ruins its terrifying villain by introducing a plot hole: the ability to wish for any one thing when one reaches the center of the universe.

Gorr’s reign of terror is driven by the loss of his daughter. But this plot hole means that Gorr did not have to kill countless victims or inflict pain; rather, he could have figured out a way to peacefully reach the center of the universe and wish for his daughter back. Somehow, he never thought about this before.

On another note, in the comics, the story of Jane Foster becoming Thor is very interesting and cool. However, in this movie, Jane receives the powers of Thor because of Thor’s previously unknown ability to talk to his sentient hammer.

The story is strong, but how it was adapted is very weak. The story is so weak that the storyline relies on an exposition dump in the most awkward way possible: having a character talk for an extended period of time. This is a hallmark of bad storytelling.

Overall, in the words of the movie itself, this is not a “classic Thor adventure.”

Dr Strange and the Multiverse of Madness

Another film in the Infinity Saga, “Dr. Strange and the Multiverse of Madness,” is the most confusing movie of the saga so far. It aspires to do many interesting things. Yet, because of the poor storyline, it becomes a confusing mess even to those who have read the comic.

The beginning of the movie wastes no time introducing the multiverse to the MCU by showing the death of a Doctor Strange from another universe and the consequences of the “snap” on normal civilians.

The film also focuses on how bad Strange’s life is despite being an accomplished surgeon and an Avenger. He has no personal life or love life. The only girl he has ever loved married another guy. It sucks.

Most of the movie’s actual fight scenes are pretty incredible, however. Sam Rami, the director of this movie, also directed the original trilogy of Spiderman movies, so he knows how to choreograph a fight scene.

The film’s scorer, Danny Elfman, perfectly complemented the fight scenes with an epic soundtrack. Strange’s fight with Shuma Gorath even features his eye getting ripped out, an appropriate homage to Sam Raimi’s horror roots.

Despite these favorable elements to the movie, the story goes off the rails. Dr. Strange and freshly introduced America Chavez embark on a brief, multiversal journey which viewers see little of. The characters end up in another universe, completely shattering the multiversal norms that Marvel had previously established.

The universe numbering in the Marvel Universe have always been consistent. The main comics universe is number 616, and the Marvel movie universe is number 199999. This was inversed in “Multiverse of Madness” when it was explained that Dr. Strange’s universe in the movie was 616 and not 199999. This makes this story conflict with every other multiverse reference in Marvel history. Unfortunately, this is only the beginning of the film’s confusing chaos.

Additionally, the movie pacing is rushed and difficult to understand. The movie introduces a lot of information and concepts, probably unfamiliar to those who do not read the comics, more than any other MCU movie. It desperately needs to give viewers time to breathe and to explain all of the information presented to the audience.

Of all the new MCU movies, “Doctor Strange and the Multiverse of Madness” is not all that bad. There are some amazing choices that help this movie be alright and not outright terrible. The cinematography, for instance, is very unique. The horror concepts that are used when Wanda appears make reference to many different classic horror movies.

The themes of this movie are also very good and fleshed out. The themes of happiness and grief through Doctor Strange’s and Wanda’s arcs, respectively, are relatable to the audience.

All-in-all, despite several weaknesses within the Infinity Saga, there may be some hope for the MCU. “Doctor Strange and the Multiverse of Madness” was a significant improvement over what came before, and “Black Panther Wakanda Forever” was a great movie, with good writing VFX that look realistic and not out of place and especially given the passing of Chadwick Boseman the movie does a great justice to him and his life and the life of his charater.