Coach Wilson told a story about how Alexi didn't want to be captain and she said "everyone laughed but I looked at her and thought, 'well it's too late for that' " 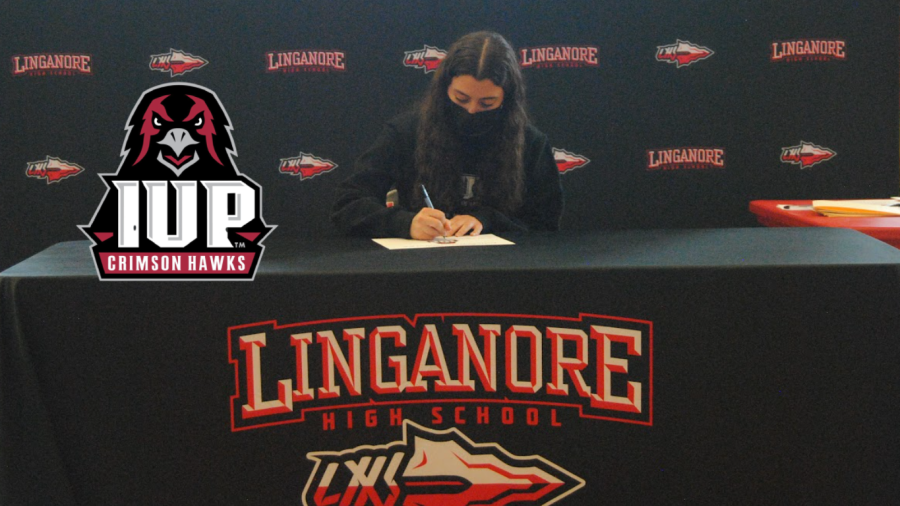 Alexi Crosby signed her National Letter of Intent to continue playing Lacrosse at the Indiana University of Pennsylvania.

by Nick Killway and Emily Lotito

On Feburay 2, Alexi Crosby signed her National Letter of Intent for the Indiana University of Pennsylvania.

She was MVP for the 2021 high school season.

Crosby  had many choices, but she chose IUP because she liked the vibe of the school and the girls she met while visiting.

“I went to the IUP’s camp and I really liked the girls I met. I was put in a group with the other recruits that were committed there and they were inclusive and really nice to me and I didn’t feel like I was being judged. The school was nice it has about 12,000 kids and I wanted a medium sized school so it worked out,” Crosby said.

“As of right now I’m undecided. I’m going in as exploratory, meaning I don’t really have a major yet,” Crosby said.

College sports can be a challenge when trying to balance a higher education with the intense training. Many athletes, including Crosby, grew unsure if they want to compete in college sports. But as Crosby went through the recruitment process, she convinced herself that she would be able to handle the challenge.

“I didn’t think I was going to [play sports in college] for the longest time. . . I didn’t really want to at first. I just wanted to experience college without the extra level of sports, but after a while I thought it could be fun. Once I went to the campus, I thought wait, this could be really fun.”

Alexi’s father, Cliff Crosby, is very excited for his daughter.

“We spent a lot of time the car taking her to and from practices and spent a lot of time in hotels for tournaments.[With Indiana University of Pennsylvania] Being so far and away from home, she’s kinda the spark plug of the family, so it’ll be tough to see her go,” Mr. Crosby said.

Cliff Crosby went onto talk about his daughter’s new coach.

“I like her [Brenna Roan] a lot. If I didn’t think it was a good fit, I would have stepped in.”

It is easy to say that Cliff Crosby is a big supporter of his daughter. Alexi even said he is her biggest supporter.

“My biggest supporter is definitely my dad because he cut the film for me to put on all of the recruiting pages.”

You could definitely see the amount of pride in Mr. Crosby’s eyes as he watched his daughter sign to Indiana University of Pennsylvania.