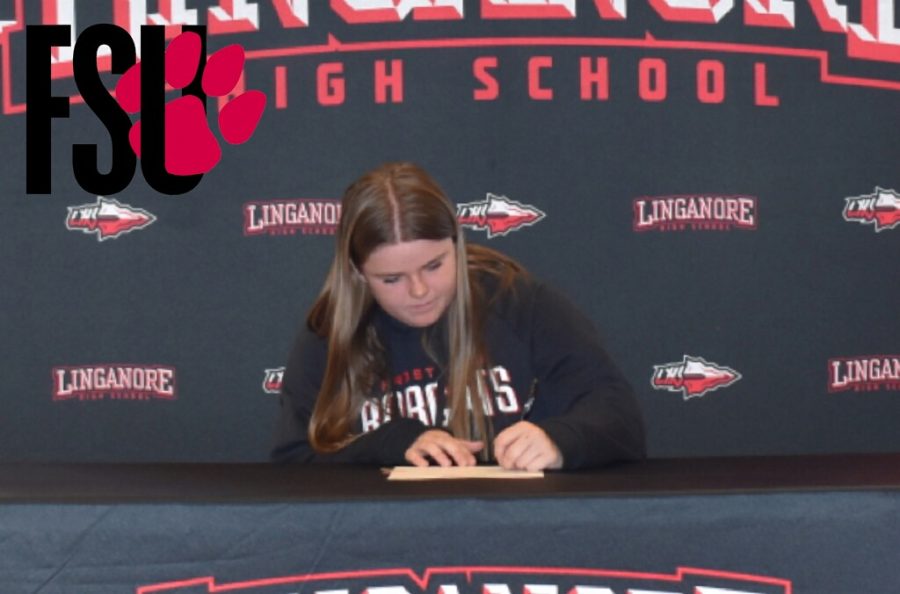 On November 9, Linganore High School (LHS) senior Katie Healy signed her National Letter of Intent and signed to Frostburg State University (FSU). She will be playing Division II softball for FSU and will enter as a member of the Class of 2027 in the fall.

Healy began playing t-ball when she was four, which led to her transition into softball a few years later. Healy noted that her club team, the Urbana Rippers, helped prepare her for higher level play.

In addition to her offer from Frostburg, Healy received an offer from Hood College to play softball. She ultimately decided on Frostburg because of the amazing team atmosphere and campus.

“I went to a Frostburg camp last year, and I just loved the school,” said Healy. “I loved the coach, and all the players were really welcoming.”

Healy is also beloved by her LHS teammates and coach. Linganore varsity softball coach Andrea Poffinberger explained her contribution to the team.

“[My favorite part about coaching Katie is] how energetic and tenacious she is at every practice and game,” said Poffinberger. “She really brings her teammates to life.”

“Katie has so much power [at the plate],” said Poffinberger.

Healy’s batting skills contribute greatly to the success of the team. At the 2022 Maryland State Softball Championship last spring, Healy hit three run-scoring triples and helped lead her team to a hard-fought and well-deserved victory.

While in college, Healy plans to major in nursing for her undergraduate degree. Eventually, she wishes to become a delivery nurse.

Healy has no worries about simultaneously managing her academics and a college-level sport. In fact, she already manages more than one sport during the school year: she plays volleyball and basketball when softball is not in season.

In addition to being a three-sport athlete, Healy has always had clear goals for her life beyond high school.

“I’ve just always wanted to [play softball in college],” said Healy. “Since I was a little girl, that was my goal. I’ve played forever.”

As she continues her athletic career, Healy will not be the only Frederick County (FCPS) graduate on the Frostburg softball team. In addition to Healy, there are students from Brunswick High School and Middletown High School. She is excited to join them.

“We just clicked … we bonded over [being from FCPS],” said Healy.