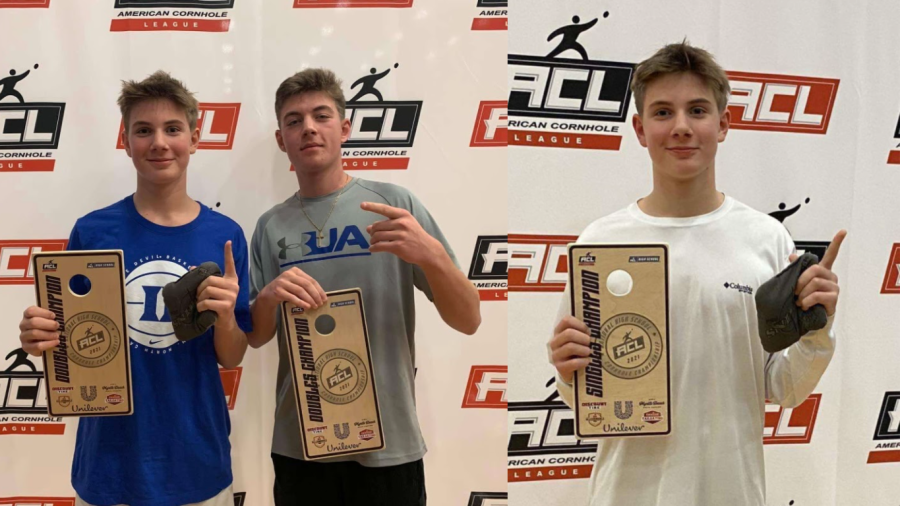 Would you be interested in joining a cornhole club?

On April 28, 2022, senior Michael Dodson and sophomore Zach Dodson were presented with a check for $7,500 to start a cornhole program at Linganore High School, with the intent of expanding to other FCPS high schools.

They received the check with the presence of Principal Cindy Hanlon and Athletic Director Sonny Joseph.

In late December 2021, The American Cornhole League (ACL) held their first National High School Cornhole Championship (NHSCC). High school students from all across the nation headed to Myrtle Beach, South Carolina. By the end of the tournament, the organization awarded $25,000 in prize money.

Micheal and Zach Dodson, Ben Moore, and Devin Burall drove out and participated. They brought  home two national titles and a cumulative money prize of $7,500.

According to the ACL, the prize money must go toward the high school to begin a cornhole program.

The Dodson brothers are very excited to have a direct involvement in the creation of the program.

“I’m excited for what is to come. Me and my brother want to help out and bring this program up to FCPS Athletic Directors to promote the expansion of cornhole within FCPS. Next year I would like to have the club ready to run tournaments within the school and send some more players to next years National High School Cornhole Championship,” said Zach Dodson.

Joseph said, “Right now we are looking to just start a program within Linganore, but would love to open up the idea to the county so other schools can become involved.”

The school is currently looking for a staff advisor to oversee the club, but they are expecting to have more information available in the fall.