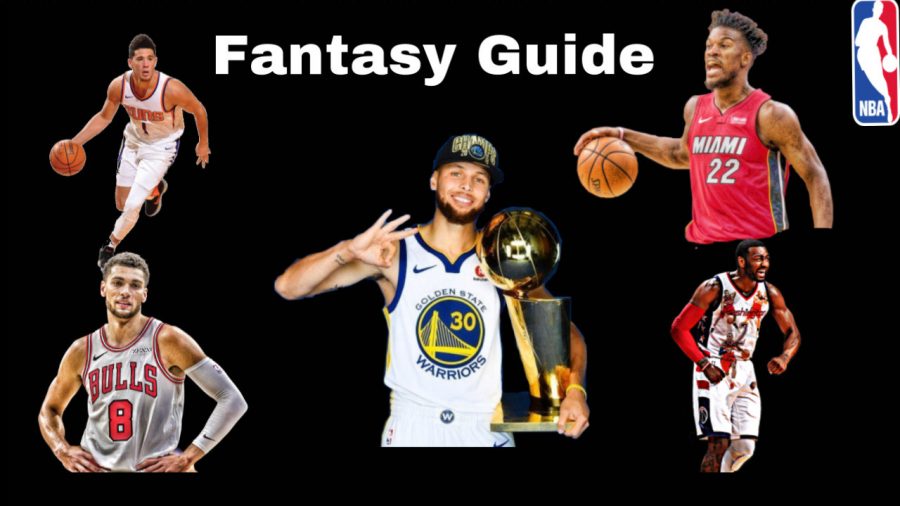 On December 22, NBA fantasy basketball began. Fantasy basketball is a great way to pass the time with friends. The point of the game is to draft players based on their averages and how well they perform. The way a participant earns points is based on how well the players perform. If your players perform well, you will gain many points, but if you player doesn’t perform well you won’t get as many points, and you can potentially lose points. Players access the game through an app called ESPN Fantasy Sports.

Many basketball watchers will participate in this fun fantasy basketball league with friends. There is a lot to learn about NBA players if you want to build the ultimate team to destroy your friends.

These are my picks this year.
PG: Stephen Curry
The reason why Stephen Curry was the first pick on my team is because of the lack of help Curry will have for this season. After being out for one year last season with a broken hand, Curry has had plenty of rest for this upcoming season. Curry is a two-time NBA MVP and a three-time NBA Champion.

Since the departure of Kevin Durant, Curry will be able to get more shares of the ball, resulting in more points. In fact, Curry’s main teammate Klay Thompson is also injured this season from an torn Achilles. This deadly duo called the Splash Bros, will not be happening this season, which means Curry will have to carry the load more for this Warriors team.

Curry is one of the predicted candidates this season to win MVP. I believe Curry will average about 30 points per game if he will want this Warriors team to make it far in the playoffs. Curry can provide many points for your fantasy team. Curry is a lights out scorer and can be extremely deadly when hot. Curry is projected to total 2821.2 point in fantasy this season according to ESPN.
SG: Devin Booker
From the NBA bubble last season, Devin Booker has proved he has superstar talent by leading the Phoenix Suns to an 8-0 record throughout the whole bubble season. Sadly, the team could not achieve a playoff spot. Booker led this team by having multiple 30 point game explosions and even hitting a game winner on the Los Angeles Clippers. With the new addition of Chris Paul the Suns acquired this season from a trade, there is no doubt that Booker and the Suns will make the playoffs.

Booker will continue to have multiple high efficient scoring games which will result in a lot of points on my fantasy team. Booker totaled 2551 points in fantasy last season and is projected to total 2984 points in this upcoming fantasy season.
SF: Jimmy Butler
Similar to Devin Booker, Jimmy Butler exceeded expectations last season by making it to the NBA Finals alongside the Miami Heat. Unfortunately, the Heat fell short to the Los Angeles Lakers which resulted in Butler losing. Butler showed hard leadership to the Miami Heat by making it past the Milwaukee Bucks and MVP Giannis Antetekounmpo in five games. Butler elevated his game in the finals even more by averaging 29 points, 10.2 assist, and 8.6 rebounds. Butler did all he could against the Los Angeles Lakers by taking them to six games. Butler was a fierce competitor as in one of the games he only rested about 48 seconds. Butler had an iconic moment in the playoffs where he hit a fouled layup and was resting on the basketball bar showing how much heart he put into the game.

I believe Butler is only going to get better and is going to put it lots of points for my fantasy basketball team. Butler totaled 2504 points last fantasy season and is projected to total 2969.2 this season.
PF: Domantas Sabonis
Unlike others, Sabonis has recently been an all star while playing for the Indiana Pacers. Sabonis is extremely underrated as many don’t know about him. Sabonis has averaged 20 points and 10 rebounds which is good for fantasy basketball. This type of stat line will generate a lot of points.

Last fantasy season Sabonis had an total of 2589 points in fantasy basketball last season.  That is extremely well for any type of player in fantasy to record those total points for the whole year. Sabonis is fairly young as he is only 24 years old. He will only get better and his stats will continue to increase during the years.
SG: Zach LaVine
LaVine is a perfect underrated choice in fantasy basketball  as he averages a good amount of points on the Chicago Bulls. Although LaVine wasn’t on the all star team last season, he arguably could’ve been on the team with his averages of 25 points per game. LaVine is the best player on the Chicago Bulls and is young as he is  25 years old. Lavine will only get better, and he has potential to score lots of points for fantasy basketball teams. LaVine has a projected 2228 points for the 2021 season which is fairly good for a non all star player.
C: Nikola Vucevic
Vucevic is one of the top centers in the league because he’s very consistent. Vucevic had an average of 20 points and 10 rebounds per game last season. He put up 2087 total points for last whole fantasy season as well. Vucevic is an underrated pic during the 4/5th rounds of the draft.  Vucevic plays on the Orlando Magic in which he is one of the best  players on that team. Vucevic has a projection of 2545.4 points for the fantasy league this season, which I believe is possible from his mass improvement over the years.
PG: Dennis Schroder
Dennis Schroder is coming off this season after winning sixth man of the year on the Oklahoma City Thunder. This off season Schroder has recently been traded to  the Los Angeles Lakers who won the championship last season. While on the bench Schroder averaged 18.9 points per game. Schroder had a total of 1797 fantasy points last season and is projected to have 2081.6 this season. Now that he is on the Lakers, Schroder will be able to win a championship. Schroder will be starting this year on the Lakers, which will result in more touches. At the same time Schroders touches might be limited from the two superstars Lebron James and Anthony Davis. Schroder can be a crucial role player and provide good points during the whole fantasy season. Schroder is a good pick at the last rounds of the draft.
C: Jarrett Allen
Jarrett Allen is the perfect underrated choice in fantasy basketball. Allen, young at 22 years old, has amazing defense for a center. With Allen’s amazing defense and good efficiency under the paint he creates a lot of points for fantasy teams. Allen had 1948 total fantasy points last season which is a good amount for a role player. Allen is one of the best defensive centers in the league today and will develop and get better. Allen plays for the Brooklyn Nets and is a key part to their defense.
SG: Marcus Smart
Marcus Smart is a phenomenal player for the Boston Celtics as he is the best perimeter defender on that team.  Smart is a perfect pick for fantasy because he can be efficient on the field and score. He can also get steals which results into a lot of points into fantasy. Last season Smart totaled 1390 points, and is projected to total 1629.4 this season. Smart is a good pick for a bench player on your fantasy team.
PG:John Wall
John Wall has been traded to the Houston Rockets this season and will now play along side DeMarcus Cousins and James Harden. Although Wall has been injured for past two years, he has been always an all star prior to that. Now that it is Walls season back I believe he will be an underrated pick as many people think he will not be the same as he was years ago. Wall is a good choice for a late pick in the draft and he is projected to total 2212.5 which is still good.