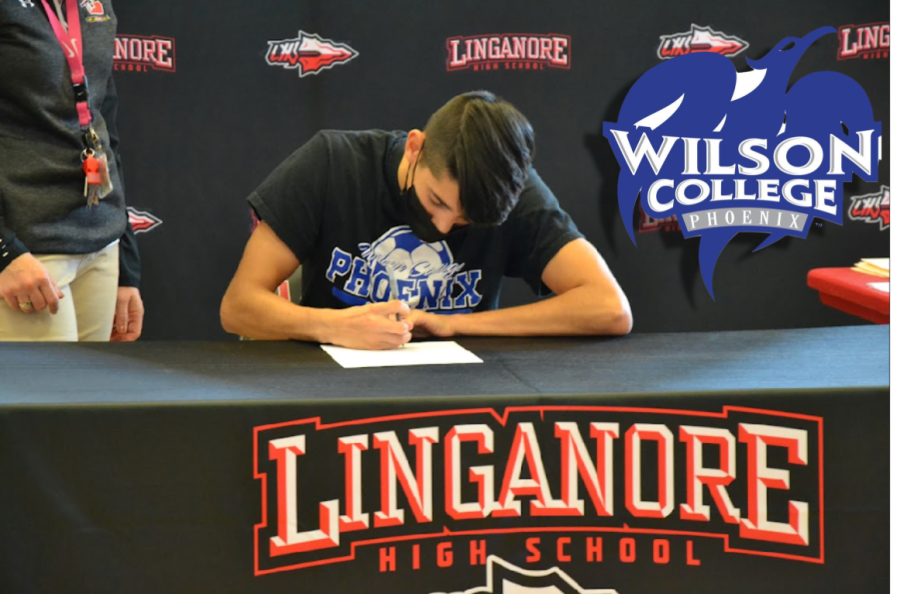 by Brayden Gregory and Nate Reinfurt

On November 10, Vincent Natale signed his National Letter of Intent to play soccer for the Phoenixes at Wilson College in Chambersburg, Pennsylvania.

The Phoenixes men’s soccer team is a NCAA Division III college team that competes in the North Eastern Athletic Conference.

Natale transferred from Urbana High School for his senior year to allow him to be in the same program as his younger brother, Chris Natale.

During his time at Urbana, Natale was the starting goalie on junior varsity for two years. During the COVID-19 year he decided to not play high school soccer and focus more on his club team and private goalkeeping lessons.

Natale has played soccer since childhood.

The Wilson coach emailed him and asked if he could watch him play, so he came to one of Natale’s games where we won 2-1 and after the game offered a spot on the team.

“The soccer team seemed like such a fun group of guys that I could see myself having a lot of fun with,”said Natale.

While playing soccer, he plans to enter Wilson’s education program.

“After college, I would like to become a teacher at the high school level or coach a high school soccer team,” said Natale.

Natale would have to say his whole family has been his biggest supporters, as they have been his driving force to play.

“It felt great as a parent to watch and see how all of those years of Vincent’s hard work and dedication. We are so proud of him,” said Natale’s parents.

Last season for the Phoenix team, Head Coach Zach Morgan and the players ended with a record of 2-10-1.