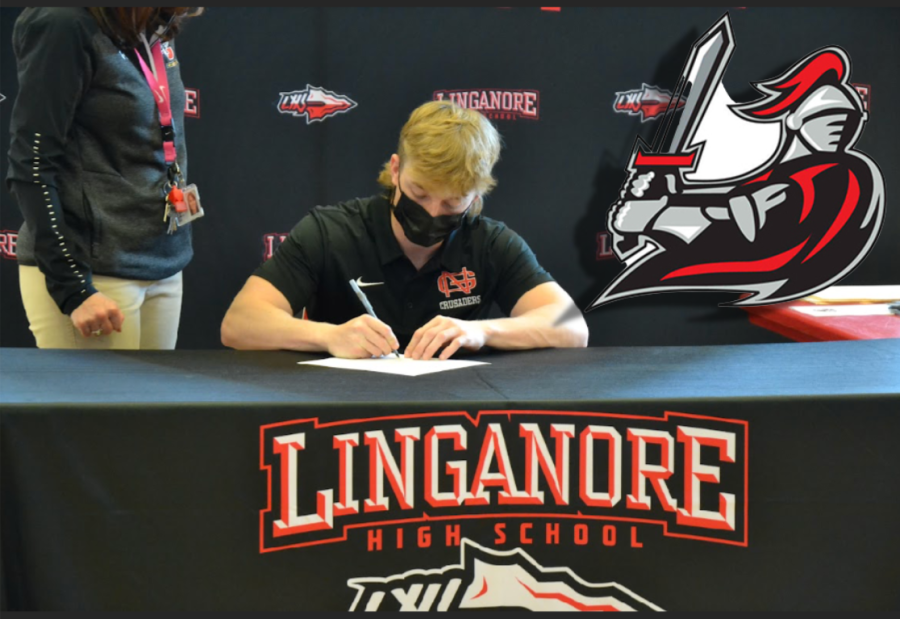 Sean Mullineaux signs to be a crusade at North Greenville University.

On the field, Mullineaux is an attacker. His coach, Richard Thompson, said that Mullineaux is a unique player, because of his leadership and initiative.

“He’s the kind of player that I think every coach wants. He’d just do whatever he has to do to help his teammates. That’s the kind of young man he is,” said Thompson.

“I think that my club definitely helped me out. I think that Team Maryland and its coaches brought me to another level,” Mullineaux said.

He also believes that much of his success at Linganore is due to his teammates and his brother, Drew Mullineaux. Drew was recruited to Frostburg.

“My brother and many upperclassmen definitely pushed me. My brother pushed me the most, because he was only a year older than me, so I was always trying to play catch up and be just as good as him–or even better,” said Mullineaux.

In the recruiting process, Mullineaux went to a college he was being recruited by to watch them play a lacrosse game. The college was playing NGU, but he couldn’t take his eyes off the other team’s playing style and technique.

After seeing the game, Mullineaux decided to find out more about the other college. He emailed the coach at North Greenville to get more information, and the rest is history. While the process of recruitment took a while, Mullineaux is happy with the decision he made to attend NGU.

“I feel really comfortable with the guys and the coach, so I think that made the biggest impact on my decision,” said Mullineaux.

Coach Thompson is looking forward to the upcoming spring season of lacrosse and is eager to see where Mullineaux’s lacrosse career will lead him.

“I’m looking for really big things for him this season. I think he’s gonna help take us a long way this year, and I think they’re getting a great, great player down at North Greenville,” Thompson said.

Mullineaux has been playing lacrosse since he was in third grade, and is excited to become a Crusader. He plans to major in business studies and hopes to start his own real estate business one day. While it will be tough managing both school and a sport in college, he believes that he can do it and is happy to have the chance to continue his lacrosse career.

“I’m excited, and I think it’s a good opportunity for me to play what I love.”