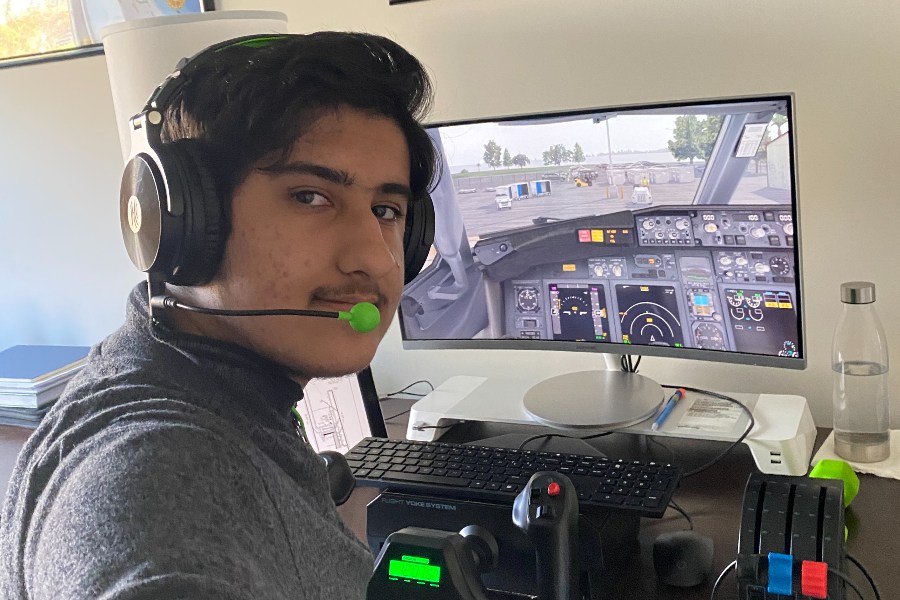 Shahmeer Chaudhry hopes to become a pilot. He has learned most of his skills from a flight simulator where he trains in realistic conditions, including the cockpit/flight deck, the plane type and current weather conditions.

Freshman Shameer Chaudhry dreams of becoming a commercial airline pilot–specifically, he plans to work one day for Southwest Airlines.

Unlike many teens, he is determined–and he practices every day.  Over the winter holiday, he began focusing on VFR (Visual Flight Rules) to accompany his already strong skills in IFR (Instrument Flight Rules).

He says he took interest in flying and flight simulation when he was coming back from a trip to Karachi (Pakistan).  He saw a plane land, with the wheels touching down, and thought it was exciting.

In addition to world travel with his family, Chaudhry has taken several local airplane flights, learning to handle a small plane. He has flown around the time of his birthday, in a Cessna 172 aircraft.

At the controls of his flight simulator, he says his favorite flight to simulate is from Baltimore to Orlando, as it is the flight he often experiences in real life.

There are plenty of programs someone can try out, but for anyone looking to get into flying themselves, he recommends X-Plane, a free software that allows the player to accurately simulate flights. There are also programs to download on the phone as well, but the most realistic simulations you can get are on VR headsets. Here is a list of some you can buy.

“Anyone with the right commitment can do it. You just need a budget,” said Shameer.

Chaudhry explains that the difficulty of the simulations is often based on the type of plane in the simulation. However, it can also depend on the platform the person chooses to simulate. Some people are going to find their phones easier to use, while others are going to enjoy the various keys that a keyboard has to offer. Some are going to find a virtual headset the easiest to use, as it is more in the user’s control.

” I come from a family of pilots, so it is in my blood I guess,” said Smith.

Smith explains that although flying can be expensive and takes a lot of time to learn, the payoff is worth it. He said that even for those who don’t have the resources to fly, simulations are very helpful and good for training.