Training the mind while training the body: How to improve mental health through exercise 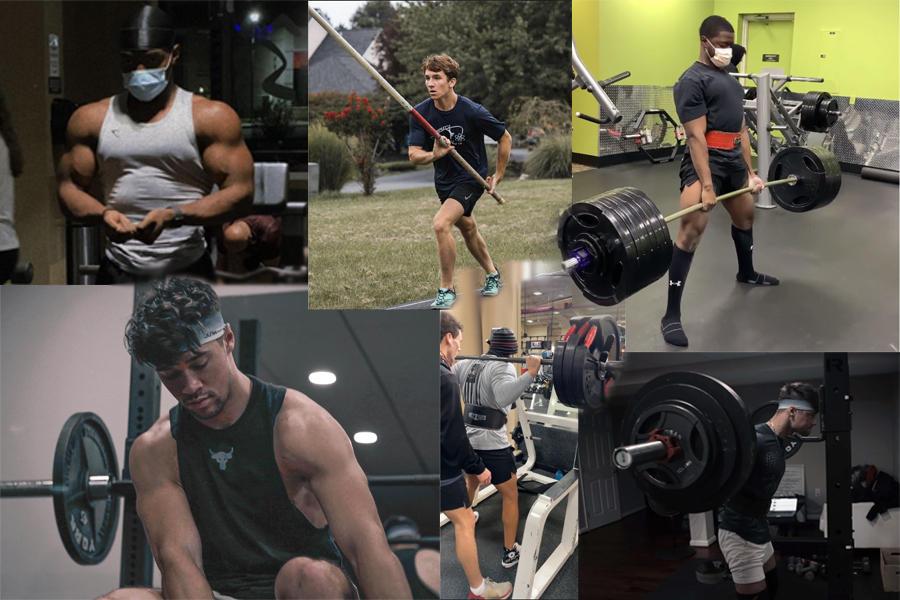 Some are determined to work out to fight the pandemic with healthier bodies and minds.

by Zach Tilmont and Julian Rodriguez

Taking time to train your mind while also training your body is the ultimate combination. During this long and dreadful global pandemic, many people are finding new ways to get through it and they are feeling better then before. Through exercise they are gaining improved and positive attitudes, due to the higher levels of dopamine being released in the brain.

The benefits of exercise

According to The Primary Care Companion to the Journal of Clinical Psychology, exercises is essential for mental wellness, as it produces vital chemical changes in the mind and body.

Graham Gardner, a member of the Class of 2021, said, “Lifting has a big impact on mental health. For me, the best thing about lifting was that when I got to the gym, the only thing that mattered was what was going on at that moment. When pushing weights and working out, I feel that my stress from the day is no longer existent. Lifting is important because it not only will make you stronger physically, but also mentally and emotionally.”

Having the motivation to do something requires knowing the goal and having the right equipment to achieve the goal which for most is becoming healthy and gaining muscle mass. Weightlifting can satisfy both. Athletes have focus, dedication, and perseverance. They also know what equipment they need to achieve their goals.  When it comes to weightlifting, routines are necessary to make and maintain progress.  Adapting routines and equipment can be a challenge.

Starrs said, “Pole vaulters only need two things— a pole, and a mat— so when FCPS shut down in the wake of the pandemic, I was left with, essentially, nothing. Everything I needed for my sport was at the school, locked away under the bleachers. As a result, I had to make a dramatic change to how I trained, focusing primarily on things like sprint mechanics, body control, and general strength. I definitely gained a new appreciation for the facilities that I once took for granted because they allow me to train for the sport I love.”

Yongbi said, “Exercise has allowed me to express myself through my knowledge of lifting and develop a craft within it. Not only have I become more confident in myself physically, but mentally I’ve developed a passion and have been able to execute the same focus I have moving weights with everyday life activities.

Mental Health and how exercise can help

Youngbi also said, “The feeling of working out and wanting to better your body is a better feeling than anything, as one is able to tell themselves that THEY did it for themselves, and end up wanting to push themselves more and more to see where their potential takes them. Although nowadays in society, unhealthy habits are deemed acceptable among people, you tend to see higher rates of depression and general non activity in them from simply not having the energy to take care of themselves physically and mentally.”

Some can argue that exercise creates a bad image for those who can’t achieve physiques they see online or in magazines, but it gets to a point where individuals realize that they want to become the best versions of themselves. Not only that, but seeing such physiques on social media gives people goals and inspiration, and becomes a positive motivator to strive to meet or exceed those goals, even if they don’t reach it. Such a simple addition to everyday life can become a healthy and lifelong sustainable activity that someone looks forward to everyday.

Unfortunately, some people suffer from body dysmorphia, a mental disorder where people are obsessed with their appearance, thinking they have a physical flaw, constantly comparing their appearance with that of others, and avoiding social situations or photos. The physical flaw may be minor or imagined. Treatment may include counseling and antidepressant medication. Healthy exercise habits would likely help as well.

Mental health is a very important subject and should not be overlooked. I believe that through exercising you can improve mental health and even cure severe mental illnesses.  According to researchers at the National Institutes of Health, “The efficacy of exercise in decreasing symptoms of depression has been well established.”

Physical exercise has many health benefits, such as an upbeat demeanor, strong bones, increased energy, better sleep, improved cognitive functioning, reduced risks of certain diseases, and lower stress levels.  We all need more of these in the face of the pandemic.

Eating better comes hand in hand with meeting fitness goals. It is a common saying that you build muscle at the gym and lose fat in the kitchen. Many people overlook this part of exercise because whatever physical activity you do it won’t matter much if you eat junk food.

Graham said, “Lifting also makes you think more about your nutrition and what to eat to gain muscle, what to eat to gain/ lose weight. Change of diet has to occur and you will find yourself eating healthier and cleaner than you ever have before.”

In the end mental health, nutrition, and exercise have a big influence on everyone’s lives. Many people struggle with how they see themselves in the mirror. All it takes is a change of mindset and some determination to drastically change your life. Everything is a mind game and once you overcome the negative thoughts and choose to pick up those weights or go on a run, there will be nothing but growth physically and mentally.