Students’ “free” time: We need an option to exercise 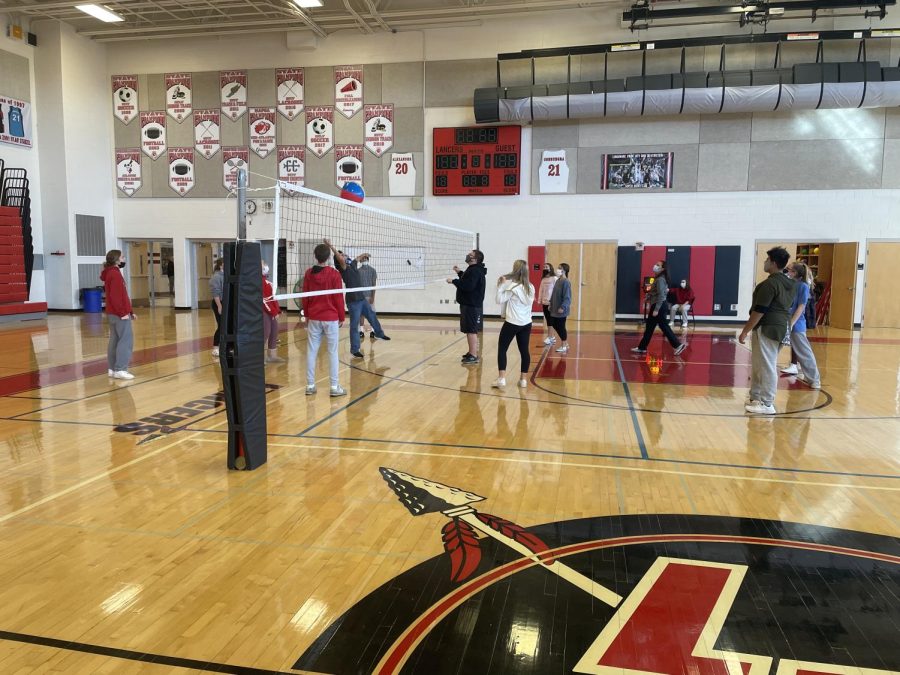 This is the 2nd lunch gym class where there are a few students playing volleyball.

Lunch at school can be boring and uneventful. There are a couple hundred students full of pent up energy.

Wouldn’t it be better for students to go to the gym and play a fun game or outside during lunch? The idea would allow students to have a necessary break during the day.

One of the benefits of gym time during lunch is that students will be getting exercise during lunch and be stretching their legs instead of sitting down for 30 minutes straight.

A lot of students do not have a physical education class, so this can be a way for them to get active.  Getting a quick 30 minutes can be very beneficial and would lower stress levels.

“School lunch could use something to boost it up and make it more fun,” said junior Evan McKnight.

A problem with this idea is that it needs a lot of supervision. Students could wander off  instead of going straight to the gym. This would require teacher or administrator presence in the hallways and teacher supervision in the gym to make sure there are no injuries or rough play.

Another problem is noise/bothering other classes, especially the ones between the cafeteria and the gym. Students during lunch make a lot of noise, and when they travel, they could make more noise than necessary and make it harder for the classes right next to the cafeteria.

Trash outside of the cafeteria could also be a concern. Students tend to be messy and bring food everywhere. It would be important to enforce no eating in the hallways or gym.

A pro of this idea can also be that there are going to be fewer people in the cafeteria, so there is less of a need for another lunch.  We could go back to three lunch shifts.  PREP could also get stretched out for a longer period of time, meaning more exercise for the students.

Medical journalist Colette Bouchez wrote, “Experts say that combining fitness and lunch is one of the best ways to incorporate exercise into a busy lifestyle.”

Since gyms and weight rooms are in use during Period 3, using the gym during lunch could be out of the equation. But that is why students  would be allowed to go outside and use the outdoor courts. They could use the equipment that is not being used in the gym. For the weather situation I think that simply the option to go outside should be off the table for that day.

PREP might be a more realistic option since no classes are going on, and the hallways are nearly empty.

The way students could be recruited for this is that they could sign up and be called down to a location when it is time. The only problem would be that there could be a situation where too many kids sign up. In that case, another plan could be that all the students who wish to join can go to a designated location, and once the capacity is reached then there is a announcement saying that nobody else can come.

Mrs. Rachel Easterday teaches physical education and health.  During PREP, she monitors the halls.  She thinks open gym is a good idea but difficult to implement.  “It actually would be a good idea, but the main problem would be having to move the kids from PREP into a different area.”

Easterday said, “That would not be a good idea because during lunch the gym is being used, and the only time it isn’t is fourth lunch but that is when the teachers get to eat.”

Her thoughts on using the outside facilities need solutions, too.  “That would be great too but there are two problems. One is getting someone to watch over/supervise the students. The other is what students are going to do when the weather is bad?”

Easterday asked, “How would students go to the gym?”

Now the main issues are having available staff to watch the kids and getting the kids into the gym/outside without taking too much space. Once these problems find a solution then this idea can be implemented successfully.

The chances of being able to have open gym during PREP is not unreasonable. Lunch would have to take the most amount of changes, but PREP seems likely. Maybe sometime in the future this could become a reality.