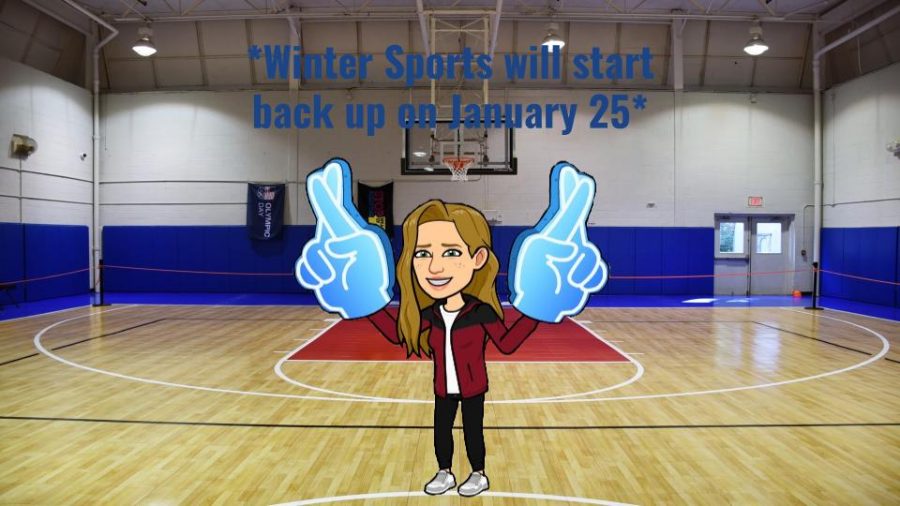 Winter sports are starting back up January 25.

Unless you have made Tik Toks of yourself dribbling the basketball and have millions of followers, my guess is you are not being actively recruited to a Division I school.

With Covid-19 taking over our daily lives, it is also taking over students’ athletic futures. Usually, college programs start reaching out to student athletes as early as their sophomore year of high school. For most student athletes, that is the case, but with Covid-19, recruiting has been at a standstill for many.

College coaches and recruits have been sending out emails to student athletes and giving them information about the schools and teams. But, sadly, that’s usually only virtually. Recruits can watch a virtual tour of the school and video conference with the coach, but often can’t meet or see the coach and college in-person to get a real sense of how they fit into the program.

The abbreviated (3-week) public school competitive schedule is now set for the end of January.  Many athletes rely on the high school season for colleges to evaluate their skills. But with the pandemic, colleges can only look at last season’s statistics, which may not be the student athlete’s best season.

All the training between the last season of play and today means nothing without statistics and records.

Many high school teams did Zoom calls and did planned workouts together. Linganore’s softball team got to have a week of practices, and one scrimmage but that was the end of their season.

Athletes who have paid to play in club sports have the advantage.  Many of those teams have held practices and competitions.  Again, it’s the families with more money or connections who are able making sure their athletes are playing.

I’m lucky.  Because I swim for a club team, at least I have had something of a competitive season.  I feel for students who rely on public school teams.

Private schools, like McDonough and Saint John’s Catholic Prep have also held some practice and competition. SJCP plans to have girls’ basketball start on the week of February 7. According to the school’s website, voluntary workouts began on January 17. Along with the girls team, boys basketball began voluntary workouts on January 24 and their season will start February 8.

Monocacy Aquatic Club, a club swim team located in Frederick, had to cancel practices and meets due to the pandemic. The team stopped all swim practices in early March and didn’t get back into the pool until mid June. The team did have Zoom calls where they did workouts together. That is more than what many high school teams got to do.

“I believe the greater impact has been working with other teams, coaching staffs, more game time experience.  And things like time management, communication, and teamwork have obviously been impacted by no spring season last school year and no off-season training for high school currently permitted. High school sports are important for more physical and social development which have clearly been impacted during the Covid shut down.”

Another impact is on the number of players. How many players will return when the positivity rate in Frederick County is still over 8%? The sports season is planned to end February 13. Some students and families may decide the short season isn’t worth the risk.

Junior and swim team member Caroline Hobson said, “I think it is really risky to have a swim season right now. With the numbers and spikes in cases that we are seeing, I think it is best if we wait a couple more months to try and start the season back up.”

While the water in a pool has chlorine to kill germs, it’s not a perfect environment. “You have to be unmasked and indoors for a long period of time which can recreate problems with the spread. However, I’ve been attending socially distanced swim practices for a little while now and they seem to be working fine,” Caroline Hobson said.

It’s hard to blame people for circumstances beyond their control, but for students who have dreamed of sports being a part of their college experience, this is a blow.

Having a delay in winter sports really affects athletes who were looking forward to the season but also get to shine. Athletes were relying on the season to have recruits look at their plays or times.

Not only are high school sports being postponed, so are college sports. Immaculata University in Pennsylvania cancelled their swim season because NCAA advised all college sports be delayed. Some colleges and universities are still having practices but no official meets.

NCAA came out with a list of guidance and recommendations .A few recommendations that they suggest is that all athletes and coaches wear face masks/coverings before and while entering the building, have hand sanitizer always, athletes may only go onto the court or bathroom, meaning they are not allowed to enter guest and public areas.

And the fans–our parents and friends–are a huge part of the equation.  Who wants to perform to a Zoom screen and empty stands?