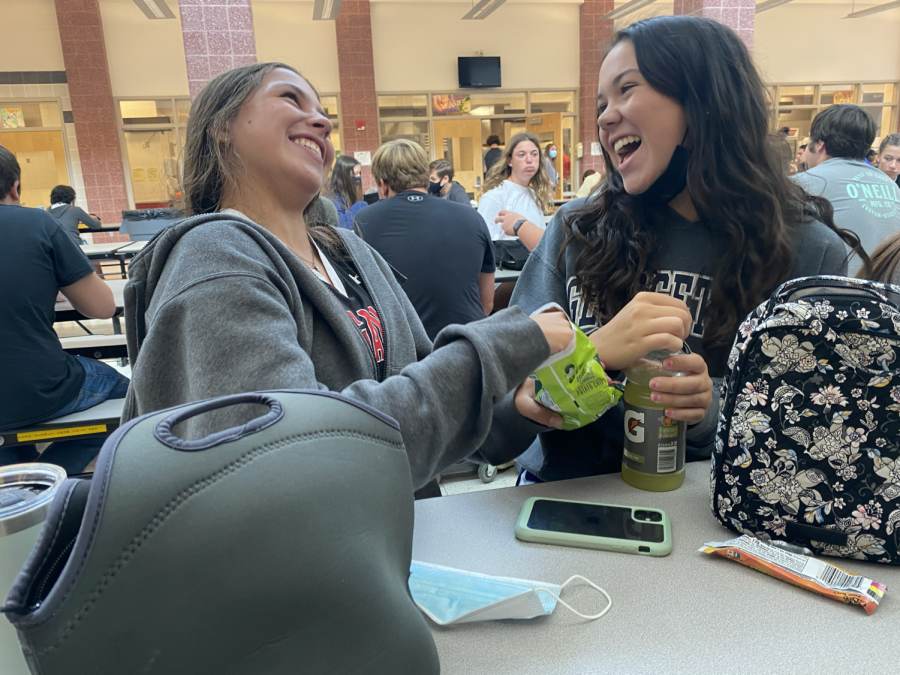 It’s a few clicks to gain followers, but those are not your friends. Going back to school isn’t easy, but having to remake friends makes it extraordinarily complicated and stress-inducing. Who cares about math and science–I’m talking about the science of friendship.

Today, most teenage friendships rely on social media. Snapchat, Instagram, and Twitter are main sources for making plans, texting, sending pictures, and calling among friends of all ages.

When COVID hit, many casual school friendships lost communication due to a lack of face-to-face interaction. Going two years without the comfort of knowing acquaintances are working right next to you is hard enough, but having to return to class with the awkward barrier of knowing that you’ve both gone two years without talking to each other makes it even worse.

How do you say, “Yeah, I’m sorry I didn’t text you for two years, but do you want to hang out Friday and work on this math assignment?”

Sophomore, Tess Engel, said, “I feel like online friendships have contributed a lot to feeling lonely. I don’t connect well with people online, and I’m not really replying to people…it’s not like I didn’t want to reply, It’s that it was just draining for me to do it. You have to be on your phone a lot to not feel lonely, but also at the same time, being on your phone a lot also isn’t good for you.”

Engel is just one of many feeling drained from social media, and it was, essentially, the only way to communicate when COVID-19 hit. Sixty one percent of young adults reported experiencing “serious loneliness” in a report from Making Care common, a Harvard Graduate School of Education Project.

Engel said, “I definitely feel like it’s very awkward seeing my old friends. We’ve moved on…I mean, I used to be super social, especially the year right before the pandemic, but now I run out of things to say in a conversation. And I feel like I just rely on other people to hold up the conversation.”

Some students avoiding communicating altogether, just to avoid the draining feelings. It is an issue that has yet to be addressed by the public or, better yet, by the social media application CEOs themselves.

CEO of Snapchat, Evan Spiegel, in an interviewer from WSJ magazine, said “Social media is a game. Playing that game is really different from building a relationship with our friends.”

However, when the “game” of social media becomes the foundation for friendships and leads teen students to be anxious over whether or not a friend has replied in six hours, it’s not so different from building friendships because it itself is the foundation.

Fitting in with a group is not a friendship, yet fitting in is important, so naturally, child safety groups have raised many concerns regarding teenagers disliking app usage but still continuing theirs due to social pressure.

Campaign for a Commercial Free Childhood, a child safety Boston-based non-profit, described Instagram in a letter to Mark Zuckerburg as an app that “exploits young people’s fear of missing out and desire for peer approval to encourage children and teens to constantly check their devices and share photos with their followers.”

Parents are worried, too. They understand the balancing act of fitting in and are concerned for their children.

Niloofar Djourshari, a Lancer parent, said, “I always see my children conversing online with friends, and I’ve seen both of my children handle it differently. One of my kids is very introverted and finds peace in online friendships, while the other kid really needs to be face to face to talk to someone. When the pandemic hit and almost all communication had been lost for them, except online, I still saw the online scheme of friendships as harmful. My kids obsessed over their phones just so they could have a conversation with their friends. It makes me sad that these kids don’t get to just go outside to talk to friends, like what I did when I was a teenager.”

The return to in-person school created anxiety. A study produced by the Centers for Disease and Control Prevention found that 46% of young adults reported feeling symptoms of anxiety and stress-related disorders as a result of the pandemic.

Djourshari said, “There was without a doubt a hostile reaction from my children about going back to everything being in person. Even my more social kid, who loves the connection a face-to-face conversation brings, had gone so long without one that they really started to feel like they forgot how to hold a conversation.”

This practically unknown feeling of a barrier caused by the apprehension of losing friendships, feeling awkward, and the sensation of thinking you have forgotten how to hold a conversation is not something Djourshari’s kids are alone on.

Kaitlyn Mannebach, a sophomore at Urbana High School, said, “I have definitely lost contact with many friends, and I constantly feel awkward in conversations. It’s as if I have nothing to say, and that makes it even more awkward.”

Loneliness is something that social media amplifies. But, schools foster a sense of solidarity, something social media can never attain. Now, how do we get back to friendships? What about the future- how will the lack of communication skills impact young adults, dating, and marriage?