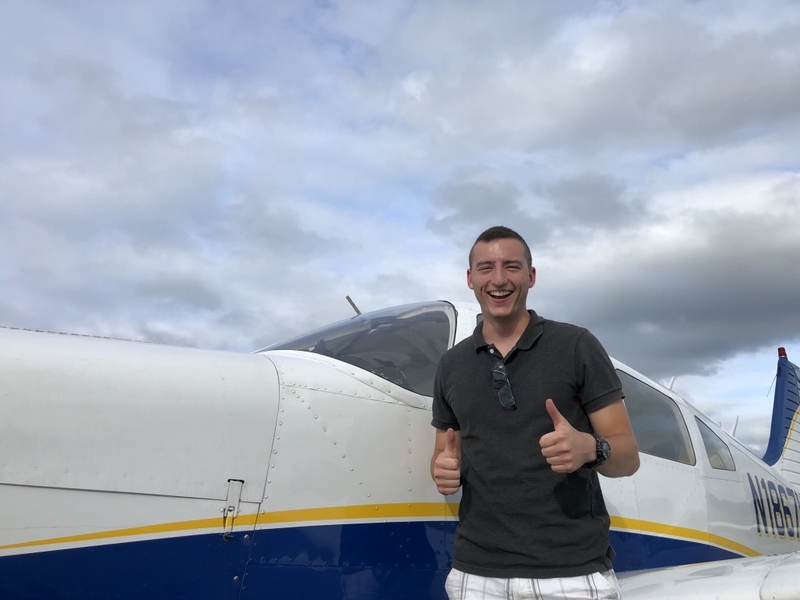 Habig after his check ride examiner told him he passed.

Have you ever dreamed of flying planes?

For first year math teacher Collin Habig that dream is becoming a reality. Habig earned his private pilot license in August 2019, after working toward it for three summers, and now Habig is scheduled to attend USAF pilot training in May 2021.

The interest and curiosity for flying, arose when he was young. From watching Top Gun, to completing his aviation merit badge in Boy Scouts, it was obvious that he liked planes. Habig’s uncle was also a private pilot, so he had the opportunity of going up in his uncle’s plane a few times.

“All through middle school and high school, I knew I wanted to become a pilot in the Navy, but I didn’t really understand why until November 2015,” said Habig. Habig is referring to the terrorist attacks in France and Belgium.

“After the bombings, it was clear to me that evil exists in the world and threatens the ideals of life, liberty, and the pursuit of happiness that America represents. I felt called to stand up and oppose that evil. I have a passion for flying, and the world needs pilots to stand against evil.”

Habig graduated from Loyola University Maryland in May 2020, and was commissioned into the USAF through ROTC at the University of Maryland on May 23, 2020. He has been assigned to the 14th Student Squadron at Columbus AFB, Mississippi. However, because pilot training is so back-logged, Habig has to wait a full year between commissioning, and leaving for pilot training. Therefore, he looked for a math or physics teaching position for this school year, and Linganore offered him a math position.

“I am really thankful that Linganore offered me this position,” said Habig. “I have really enjoyed my time teaching here, and a huge part of me does not look forward to leaving in May.”

Currently, Habig is scheduled to enter active duty on May 25 2021,  traveling from Baltimore to Columbus AFB.

Habig began his flight training in June 2017, at the Naval Academy Flight Center at Lee Airport in Edgewater, Maryland. This was during the summer of his freshman and sophomore year of college.

Originally, he was only looking to start ground school, which would prepare him for taking the FAA written exam (similar to Driver’s Ed). But after meeting with an instructor, he decided to start flight school. During summer and fall of his sophomore year, he flew a lot when he was able to, and on the weekends.

“Learning how to land the plane safely and consistently is the hardest part, and it took me a while to get it,” said Habig.

But with hard work and determination, Habig was able to solo it for the first time on November 11, 2017.

“I just did three full-stop take-offs and landings in the pattern at Fort Meade Airport, and I didn’t die! I almost zig-zagged off the side of the runway on my 2nd landing, but I didn’t (phew!). I remember the feeling of taking off for the first time alone in the airplane, no instructor. It was a mix of a little scary, but really exhilarating,”

Habig has mainly flown with an instructor, but has logged 11.4 hours of solo flight time.

In the spring, Habig will be leaving to enter active duty. The students and staff at Linganore want to thank him for being a great teacher and will surely miss him. Mr. Habig- We wish you well and good luck as you pursue your dreams!