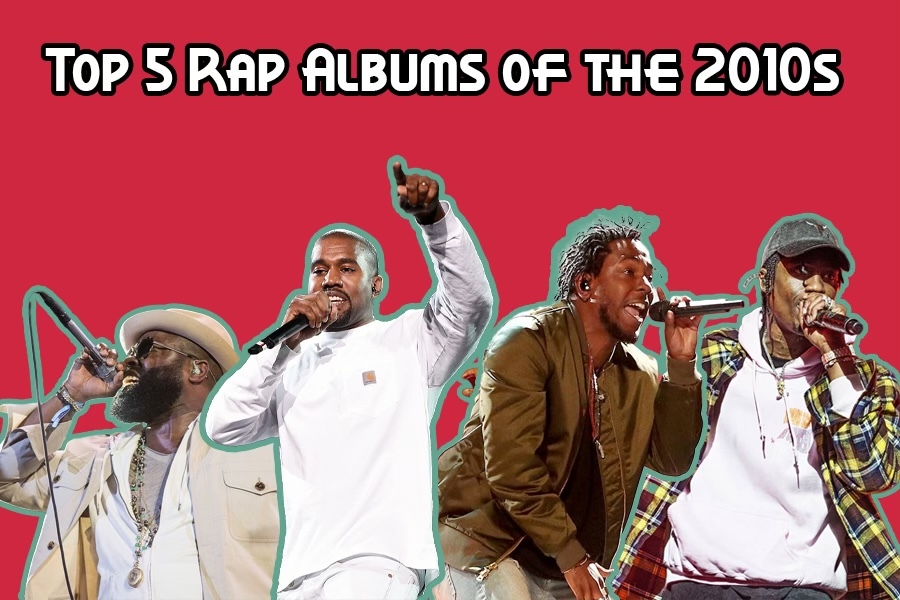 The last decade was an amazing decade for music. Rap has had various artists that have changed the genre throughout these years. Bailey Spore, Joey Dorman, and I came up with our top 5 rap albums of the decade.

good kid, m.A.A.d city all revolves around an actual event when Lamar was younger. The album is one of the best narrative albums of all time and has songs that are the events from perspectives of other people.

“It’s like a movie in the form of an album,” said Joey Dorman.

Rodeo was Travis Scott’s debut album. The album has amazing production and tells the story of when he first moved to L.A. and started living a new life.

“90210” is one of the best songs in the album, it’s also Scott’s favorite song from the album. “90210” shows the differences of Scott’s home life in Houston and how it changed when he moved to L.A. Halfway through the song the beat switches. This was intended to show the difference from living in Texas and travelling to L.A. and how he needed to consider his new lifestyle before it’s permanent.

Undun tells the story of a man whose life is rewinding from the point he died. One of the best parts of Undun is how all the music is live recordings and none is electronic or modified in a computer.

“The Lighthouse” is a song on Undun where the character of the album feels more lost with the success he gains and compares it to being lost at sea and drowning.

“Devil In A New Dress” is one of the best songs on the album that shows the message and story of the album. The song shows how fame brings temptations that made him forget who he truly is. “Devil In A New Dress” also gives listeners one of Kanye’s greatest feature verses from Rick Ross. Ross was told to write the verse ten different times before West was happy with it.

“Arguably the greatest feature verse of all time” said Spore.

#1. To Pimp A Butterfly – Kendrick Lamar

To Pimp A Butterfly is very similar to My Beautiful Dark Twisted Fantasy in how it tells a story of someone dealing with fame and how he left his roots to be a celeb he didn’t want to be industrialized and forget his old life. The albums deal with fame in different ways, To Pimp A Butterfly is different from My Beautiful Dark Twisted Fantasy in how he tries to stay humble instead of letting it change him. The album shows Lamar facing the challenge of good or evil with his newfound fame.

One standout song in this album is “How Much a Dollar Cost.” In the song Lamar is met with a situation where a homeless man asks him for a dollar and Lamar selfishly refuses to give him one. Later in the song it is revealed that the homeless man was God and that dollar was his ticket to heaven.

It was very tough for us to not have some albums in this list, but these are our top choices if you’re into rap or are wanting to listen to something new.