Review: Never Have I Ever seen a series this unique 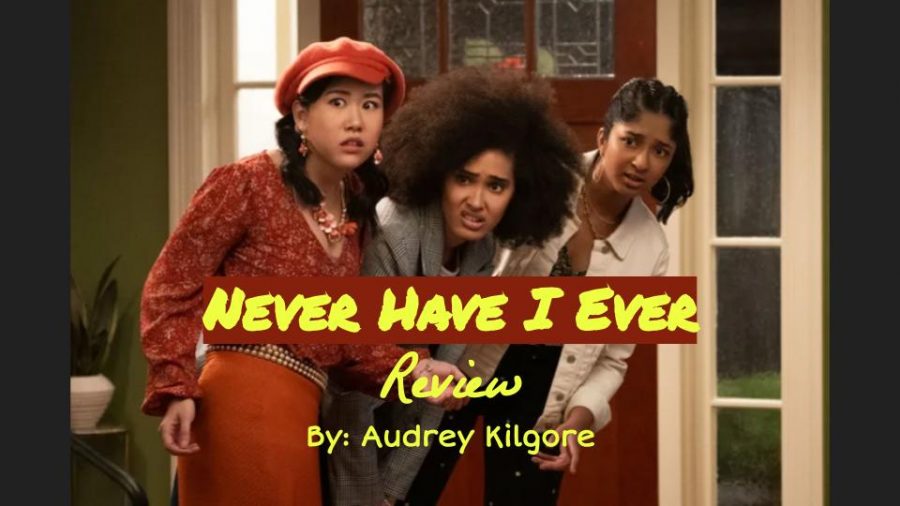 Eleanor, Fabiola and Devi peaking at the trouble coming toward Devi's house party.

This was definitely not the opening I was expecting at the beginning of the Netflix series, Never Have I Ever, but I was hooked. From the beginning, the show introduces a humorous, spunky female lead and an off-beat Indian-American family, and I had a great feeling about what the show would portray.

This new series, which first aired in April 2020, has had two exciting seasons. Never Have I Ever is a dramatic-comedy series about an Indian-American teen, Devi Vishwakumar (Maitreyi Ramakrishnan), who takes on high school, shakes up her social life, and even juggles a love-triangle.

Mindy Kaling, also the actress who portrays Kelly Kapoor in The Office, created Never Have I Ever with Lang Fisher. It is delightfully different. Devi, the leading teen in the show, expands the idea of choice and control in her own life in every episode. My first impression of her was that she was someone who would do whatever she put her mind to with her bold, but often flawed character traits. While everyone on screen is mad at her, everyone in her life—and those of us watching the series—can not get enough of her.

In Season 1, Devi tries to develop a more exciting social life, which causes many problems along the way. Meanwhile, she and her mother are dealing with the grief of losing her father. Later, in Season 2, she endures more personal struggles and learns right from wrong. Over the course of the two seasons, Devi reinvents her social life with a “…low-key sociopathic willingness to do whatever it takes to get what she wants, no matter who gets hurt.”

The title, Never Have I Ever, refers to Devi’s bucket list of activities she wants to accomplish before she graduates from high school. These include parties, a boyfriend, sex, popularity, and continued academic achievement.

Devi is one of my favorite characters. She is strong, funny, extremely smart and usually positive, though her flaws are often what lead her down challenging paths. She struggles with her confidence and how she is self-centered but growing and learning to be a better person.

Devi goes to therapy and often leaves with a new idea that only leads to more trouble, rather than a solution! However, one of her best qualities is her individuality always being on full display, through her outfits to her dialogue, and even her questionable choices. Although she often gets in her own way, she always comes out of it with a new lesson learned. I admire her striving to excel at everything, including school, being a good daughter and supporting the people she loves the most.

What I mean by “gets in her own way” is illustrated in the fifth episode of Season 2, called Never Have I Ever Ruined Someone’s Life. At the school relay she required to pass her gym class, Devi losses her phone – along with her dad’s comforting voicemail – and become disgruntled and snippy. Within a minute, she is careless and inconsiderate with impulsive words, proceeding to let her jealousy interfere with her friendship. She accidentally starts a rumor that Anissa has an eating disorder, when unfortunately, this “rumor” happens to be true. This is a typical Devi moment where she does not mean to cause harm and later works to right her wrongs.

This is not your typical teen drama. The creators include new, innovative storylines, through both main and supporting characters. Devi, after suffering paralysis from the trauma of her dad’s death, is looking to reinvent her social life. She attempts to lose her virginity to the hottest boy in school and almost succeeds, but instead she chickens out. I was very glad she did not go through with it. This sends her down a path of misunderstandings with her friends and family.

In addition to their interesting storylines, the cast is as diverse as the characters are unique. Almost all of the main characters are female minorities who are complex and multidimensional. They do not have small, insignificant roles or simple lives!

There are several Indian characters, including Devi’s mother and cousin. Her mother, Nalini Vishwakumar (Poorna Jagannathan), is a successful dermatologist who is consumed by grief. Devi’s cousin, Kamala Nandiwadal (Richa Moorjani), struggles with family, cultural conflicts like arranged marriage, and sexism in the workplace. Aneesa (Megan Suri), who goes to Sherman Oaks High, is Devi’s first Indian friend who she later learns is dealing with her anorexia eating disorder throughout Season 2.

The male leads are captivating to watch as well. Ben Gross (Jaren Lewison), one of Devi’s love interests, is white, rich, nerdy and often obnoxious, mostly due to being neglected by his busy family. The other male lead is Paxton Hall-Yoshida (Darren Barnet), who is half Japanese. This breaks the typical Japanese stereotype where most are categorized unfairly as ‘the smart person.’ This guy is hot, popular and has lots to learn!

Even disability awareness is raised with Paxton’s sister, who has Downs Syndrome, but has a job and a strong personality.

I also find the character development of Devi’s mom and Paxton irresistible to watch. The mom is a widow and raises a child, grows as a mother throughout both seasons, recovers from loss, and escapes her comfort zones. Paxton is not the best at communicating or expressing his feelings effectively, but Devi and others in his life motivate him to become a better version of himself. My personal favorite character is Ben because of his smart, witty personality and his relationship progression with Devi – from enemies to frenemies to lovers and back to friends.

Although some viewers have complained that some of the show’s cultural moments are not accurate or well-discussed, I have a different viewpoint. There could be flaws to some of the Indian culture aspects, but maybe that’s not the point from Mindy Kaling’s perspective. The show seemed to have the goal of being a comforting, identifiable source of entertainment that is there for teens and young adults to process, or to know there are people like them.

In an NPR interview with Mindy Kaling about the show, she mentions being inspired by her own experiences and wanting to reflect Indian experiences through her writing. Initially, she was worried it would be too embarrassing, but the other young Indian women she hired to write thought she described shared experiences and her outlook changed.

“There’s also the belligerent, confident nerd, and they want big things for themselves,” Kaling said. “We wanted to show an ambitious nerd … [who] wanted to lose her virginity, wanted to be cool, go to concerts.”

She carefully handpicked leading actress Maitreyi Ramakrishnan out of thousands of potential Devis at a casting call in order to best represent her image of who this character could be.

While Never Have I Ever deals with themes surrounding high school characters as a dramatic-comedy, it is also groundbreaking as a woman-created series and sets an example of how women, and women of color, can lead the fight for equal representation in modern-day entertainment and media. The writing behind this show puts the spotlight on strong, independent girls who can see themselves reflected back at them through actors portraying relatable characters on the big screen.

Never Have I Ever reflects all of the complicated, mistake-worthy, humorous and beautiful qualities of young women and builds a new level of understanding of the challenges we face today.