Disney’s Soul jazzes up the afterlife 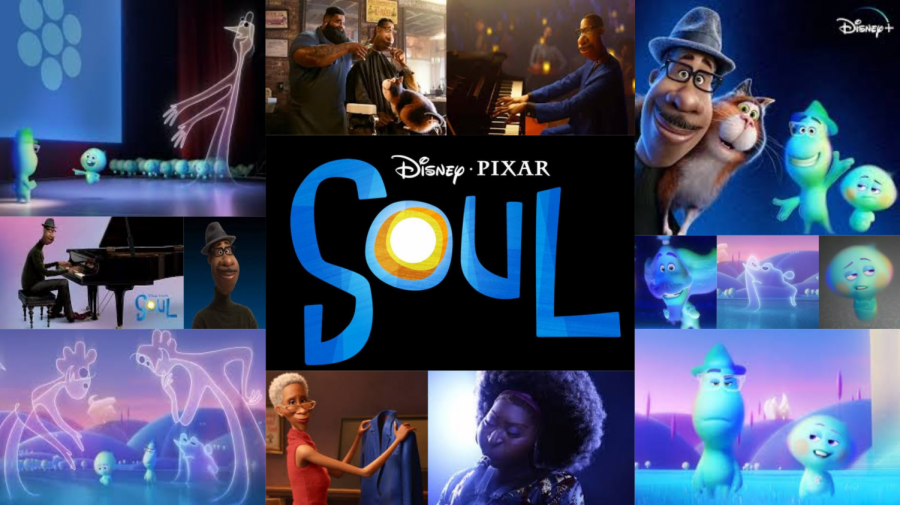 Many of the soul favorites are pictured above, with stunning animations and characters it is easy to be captivated!

by Caroline Hobson, Editor
The short URL of the present article is: https://lhslance.org/5ri9q

The afterlife and the surrounding beliefs can be an extremely confusing and frightening topic to many. The typical idea of the afterlife surrounds the idea of death and letting go. However, Disney imagines the afterlife as a colorful, revolving circle with brilliant animation and character development.

When the trailers first came out for the movie Soul, I was extremely confused and unamused. It seemed to be another typical plot following a New Yorker who has dreams of making it in the big city. A struggling musician trying to catch a break.

However, on Christmas Day, my family and I decided to watch it together.

Ten minutes in and I was completely hooked!

This tear-jerking, confusing, and heart warming movie follows Joe Gardener, a middle school music teacher with huge dreams of making it as a jazz musician in New York City.

The film highlights the sometimes surprising truth that adults, like the teens who populate most Disney movies, are struggling to follow their dreams, too. In Joe’s case, he is struggling to find a life-sustaining job and do what he loves at the same time.

Joe is a sweetheart with a caring community around him. He gets his big break playing piano in his dream jazz band, and all seems to be looking up for him. Joe is completely oblivious to the world around him after hearing that he got a spot on the jazz band.

And then there’s the accident.

As the screen turns black to fade into the next scene, I was completely shocked. How could Joe have died so soon?

Joe is then turned into one of the many magical blue souls and the viewer gets to see Disney’s imagination what the afterlife could be like. The animations of the characters, both real and as souls, are another genius part of the movie.

These nose-less souls appear to be fuzzy, blue/green, jelly bean-like figures with some unique features that they had in their past life.  For example Joe is almost a pear shaped man with glasses and a fedora. When he passes to the afterlife his features and physical characteristics come with him.

Afterlife figures such as the Soul Sorter (Richard Ayoade), and baby souls such as 22 (Tina Fey) are drawn as colorful, magical figures that give the afterlife such a creative and different look. I never would have imagined souls and the afterlife to have uplifting, cool tones. This imaginative stance on what a Soul looks like gives me a happier, more welcoming feeling than the ghosts and terrifying spirit figures that haunt kids’dreams.

The seemingly blue and purple monochromatic backgrounds compliments the light blue souls and make the animations and graphics really worth watching. The afterlife is imagined as plains, rolling hills, and beautiful skys where old souls help new baby souls find their passions.

This whole movie makes souls and the afterlife seem like a pleasant, colorful place where being helpful is prioritized.

Film critics and viewers have compared these souls to Disney’s 2015 hit, Inside Out.  I can really see that the Disney animators used similar editing techniques and art styles to create the lovable characters.

I still love Inside Out to this day. The characters, plot, and jump between real life and fantasy is really what makes the movie amazing. While these movies are similar in many ways, their differences are what caused me to love them both. Inside out focuses on inner emotions while Soul focuses on a life’s purpose and journey. I love them both but if I had to choose, Soul would rank #1.

Soul not only creates these adorable and easy to fall in love with blue souls, but creates realistic characters that represent people for who they are. Most Disney movies and characters surround the typical fantasies and fables. The prince gets the princess; the kid goes through a life changing journey; or the hero defeats the villain. Soul, however, follows an older man, rather than a kid or princess.  This journey is focusing on Joe and him finding his real purpose in life while trying to get back to the real world.

Another compelling factor in the movie is its focus on jazz and soul music and the music scene. Music is a symbol of culture, and few know that the jazz routes are what paved the way for modern music and its diversity. Joe and many members of the jazz community remind the viewers that the music they play is a soundtrack built on many famous musicians in the past.

Soul’s soundtrack was unlike many other music-focused Disney movies. Frozen, Moana, and Coco all have memorable, sing-along tunes. Soul focuses on jazz as a genre rather than making a kids classic like “Let it Go.”

Most of the jazz music in Soul was composed  by Jon Batiste, Atticus Ross, and Trent Reznor. They wrote jazz music for many of the scenes in the movie, mainly to mirror the emotions of the scene. This music added depth and made the movie even more entertaining.

As a concert pianist myself, and someone still learning an instrument, I found it so entertaining to watch the progression of Joe as a performer and listen to his amazing music. I love playing jazz, Rags, and Blues on the piano because of the chord progressions and the rhythm that comes with them.

Jazz performers have a way of improvising and still harmonizing beautifully. When a musician is talented enough, they can play with anyone, just like Joe. He has the ability to sit down at the piano and play with grace, and his talents are emphasized by  Jon Batiste’s work. The creators of the movie studied Batiste’s movements as a professional pianist and mirrored them with Joe the animated character. The result is a life-like performance every time Joe plays.

The musical plot of this movie resembles the movie Coco in many ways. Both of the main characters feel that music is a part of their life and culture. This movie focuses not on the music, but the history behind it, whether it be Cocos guitar or Joe’s piano, both use music to express themselves.

While this isn’t the first Disney movie to represent a part of a culture through music, it is definitely one of my favorites. The connections between jazz and how it can shape a person’s life is something that I enjoyed watching throughout the film.

The relationship between Joe (Jamiee Fox) and the soul he befriends in the afterlife, 22 (Tina Fey) is a dynamic duo that left me wanting a Soul 2 in the near future. While these two are bouncing from real life to the afterlife, they become amazing friends, yet leave the movie in a suspenseful cliff hanger.

Other characters such as Terry (Rachel House) and Moonwind (Graham Norton) provide comedy in the afterlife scenes where they are polar opposites. Moonwind is a classic hippie who uses meditation to help lost souls find a purpose in the afterlife. His carefree nature and love to help the lost souls really made me fall in love with his character. Moonwind is such a comical character in everything he does, he is so laid back and kind to others, I love everything about his character and feel like he makes the movie much more interesting.

Terry, on the other hand, is stickler for rules. He is uptight and is constantly pestering the afterlife leaders for appraisal. He is a math geek who makes sure the count is never off, Their worlds collide when Joe enters the afterlife, throwing the count completely off, and making Terry want to eliminate Joe completely. This makes Terry the only outstanding antagonist of the movie; however, he is also one of the funniest characters.

This movie is filled with laughter, tears, and suspenseful moments. If I had to rate it, I would give the newest Disney release Soul an 11/10. It is in my opinion one of the best Disney movies out there, and I cannot wait for the sequel.

This is an age-appropriate, family movie that has something for everyone to enjoy. I recommend grabbing some popcorn and getting your family together to enjoy this new hit.