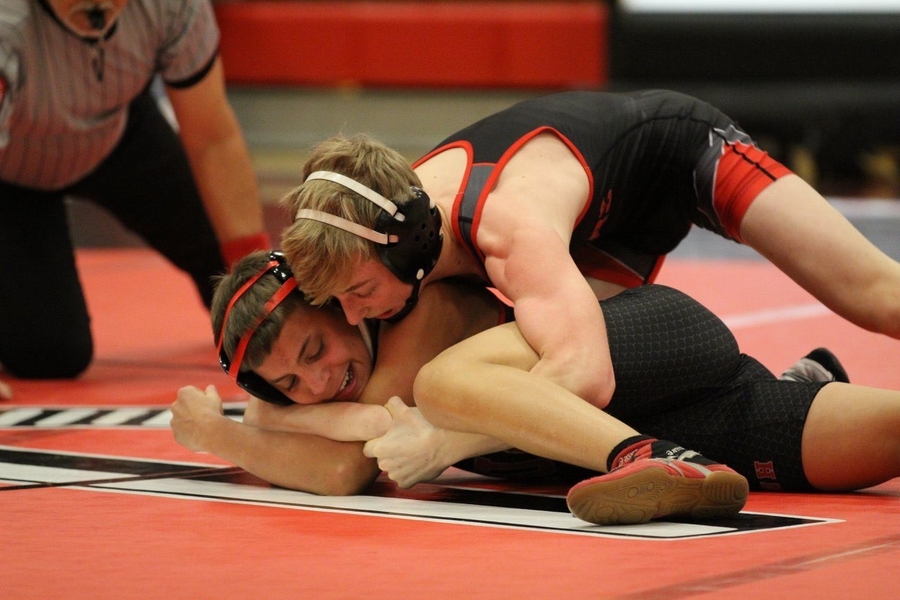 Sean Mullineaux wrestles his opponent to the ground in an intense match.

by Sierra Rossman and Frank Dickenson

Blood, sweat and spit: body against body on a mat.  The ancient sport of wrestling makes contestants and spectators squirm.

Despite the risk of serious injury that wrestling may put athletes in, the sport continues to grow in popularity on a national level.

The LHS wrestling team is no exception, with participation growing from a small group with a mediocre record to a larger team of about 24 athletes (2018-2019) to today with 30 athletes (2019-2020) and many winning matches.

Coach Ben Arneson understands the head space that his athletes must get into and what the team’s motivation comes down to.

“We’re wrestlers. We don’t like to lose,” said Arneson.

Arneson is a 1994 LHS graduate and pinned his way through a regional tournament in under a minute and a half during his high school career. After high school, he became the head coach of the wrestling team at Urbana and experienced great success with one dual meet state championship, five regional championships, and seven county championship, but chose to return to LHS because of his children’s attendance.

Junior captain Scott Hummel wrestles in the 285-weight class for his second year and has won 16 of his 19 matches this season. He was featured in the FNP on January 13.

“I got involved with wrestling after a few of the past seniors like Dalton Pearl and Michael and Joey Bromley [told me] to give it a try since it helps with football. So far this season I have only three losses and am currently ranked first in the county and 8th in the state for heavyweight. I hope to win the county tournament again, hopefully win the regional tournament too and then place in the state tournament,” said Hummel.

The sport is also extremely tough on an athlete’s mind and body.

“The hardest part about wrestling for me is getting into the right mindset of never giving up and giving it all I got. I got through that by pushing myself in practice every day and making myself mentally tougher so I can continue to wrestle no matter what happens,” said Hummel.

On the other end of the weight classes is another winner, Judge Wheat, who wrestles in the 106 weight class, but only weighs about 78 pounds. His major decision match against Urbana High School allowed the team to gain a lead on the rival school, and eventually defeat them.

After the Bromely brothers (Michael and Joey, Class of 2019) earned so many titles, Frank and Garhett Dickenson are proving themselves to be the next dominant brother pair.

A wrestler could potentially wrestle their opponent while trying to score through various moves for up to six minutes.

During those six minutes, the gym where the matches take place is electric with the enthusiasm from the crowd. With the team’s active participation in the Linganore community, many members of the community come to support the team during difficult matches.

Weight is also a major component to wrestling. Athletes have to ‘weigh in’ frequently to be able to compete in a certain weight class. Athletes also cut or gain weight depending on their predicted success in a weight class.

Cutting weight is often a difficult part of a wrestler’s life. Many wrestlers struggle being within their weight class in order to compete. In order to lose weight, it is essential to have no empty calories, eat healthy, and constantly work out.

Wrestling, although it does not get the coverage it deserves, is arguably one of the toughest sports, physically and mentally, around today. The next match will be a Tri-Match against South Hagerstown and Walkersville at South Hagerstown High School starting at 5:00 p.m on January 30.