Underclassmen bring a promising future to the track program. 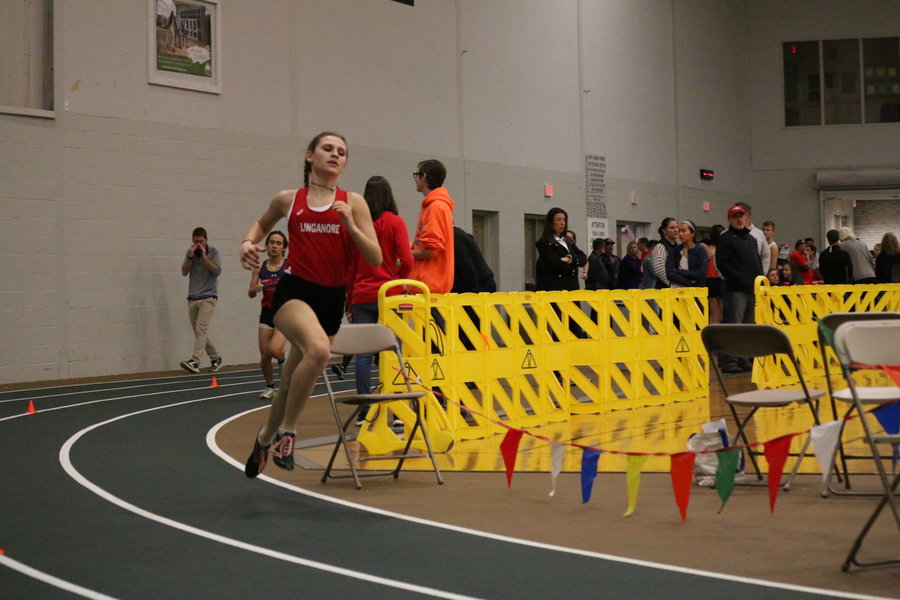 Sophomore Mikayla Moxley fights to keep her place in the 800 meter race.

by Elizabeth Rajnik and Adam Liston

On Friday, January 10, the boys and girls indoor track and field teams started the new year right with a successful outcome in the Western Maryland Winter Classic track meet held at Hagerstown Community College. The boys team placed first with a total of 93.5 points, and the girls team placed second to powerhouse Urbana with a total of 51 points.

The placement of the two teams is a huge confidence booster for the track program, as the most important meets of the season: counties, CMCs, regionals and states are all in January and February. The elite nature of the Winter Classic competition also led to many athletes achieving personal records (PRs.) Only the top six athletes per event earned points going towards their team’s overall score.

Consistent with past performances, the boys team excelled in the distance events. Sophomore Alex Kullgren placed second in the 3200 meter with a PR of 10:55.02, and senior, Zach Hunsaker placed fourth with a time of 11:06.56. In the 1600 meter, sophomore Cole Williamson placed second with a time of 4:53.00 and sophomore Jack Sears placed third, close behind Williamson, with a PR of 4:57.49.

While this is Browne’s first and last season of indoor track, he has been a very crucial addition to the team.

“Going into my senior year, I wanted to try new things before I didn’t have the opportunity anymore, so I made the decision to run track,” said Browne. “Track is keeping me in good shape and is preparing me for my senior year of lacrosse, on top of the fact that I really enjoy it, and the team is a great group of guys.

Unlike previous meets, the boys teams also found a strong suit in many of the sprinting events, placing and gaining crucial points from the 300 meter, the 55 meter dash, the 4×200 meter relay and the 4×400 meter relay. Junior Adam Liston placed fourth in the 300 meter with a PR of 38.94.

Liston went as far as diving over the finish line in order to break 39 seconds and successfully place.

“While I was warming up for my race, I was not originally planning on diving at the end, but during the race, three out of the four runners were neck and neck. In order for me to beat them, it was crucial for me to lean at the finish line. I gained so much momentum that my “lean” quickly became a head-first dive,” said Liston. “I think the dive shaved off the necessary milliseconds to get a 38.94.”

While the boys team consistently draws talent year after year from excellence in fall sports, the girls team is in a transition as the majority of the track team consists of underclassmen, many being new to the sport.

Despite struggling to keep up with the 2019  Maryland 4A State Champion, the girls team used Urbana’s strong competition to prepare for their slightly less-elite 3A competition in the regional and state meets. The girls proved they could compete as they continue to place in more events each meet.

“I think the relay teams have a huge impact on the team. Using the talent we have in our relay teams really help us score points and place in more events,” said Davies. “Unlike last year, Mikayla [Moxley] and I are the ones teaching the freshmen how to be better runners, and we’ve been so lucky to have great relay teams both years!”

The girls team also has many strong athletes in the field events. Senior Myah Davies placed first in the pole vault after vaulting 9-06.00 feet and junior Stormie Yinger placed third in the shot put after throwing 30-09.00 feet.

The boys and girls indoor track and field teams will compete next on Monday, January 20 in the Frederick County Championships. The JV teams will also make an appearance at this meet as it is their last of the season.