Female artists are unfairly judged by standards of sexuality 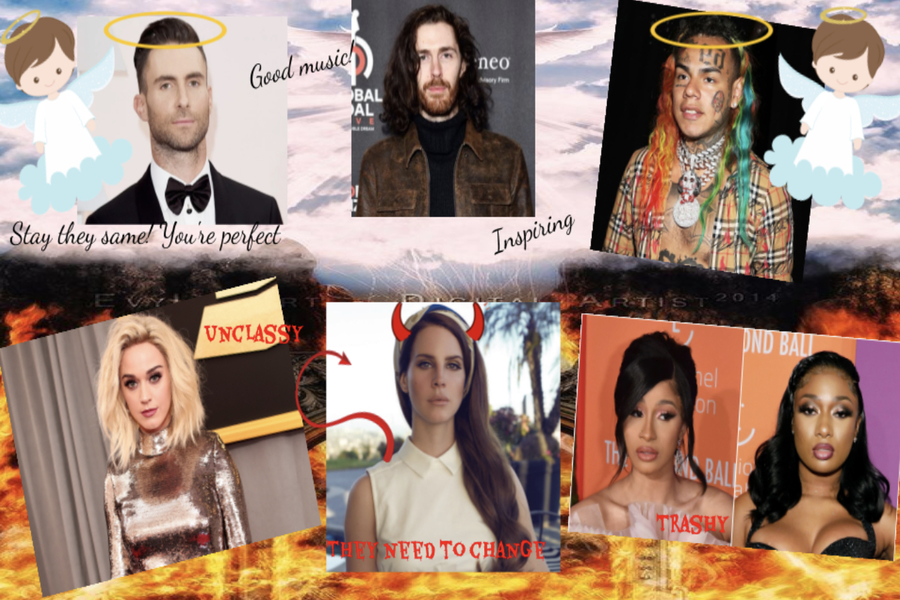 Representation of men and women in the music industry unequal treatment.

by Joshua Todd and Erica Blockinger
The short URL of the present article is: https://lhslance.org/fsj6b

Taylor Swift has been labeled a vixen who crushes men’s hearts and leaves them to rot. Katy Perry was seen as crazy for her breakdown following the pressure of reinventing her image. Lana Del Rey is called a sex addicted diva. For male performers of the same level of success, they have no negative labels!

It’s really not that hard to find examples of this bias in the music world. Look at the backlash women have received as men are praised and adored for their work.

There have been several cases of female musicians being called horrible names for talking about sex and sexuality, while men are rewarded for language that degrades women. When it comes to women writing about their own sexuality, it’s seen as taboo and gross. When a man writes about a woman’s sexuality, there’s zero criticism.

Along with this, men and women are stereotyped in their dating lives. A female artist and a male artist could both date the same number of individuals and be treated completely differently. A woman could enter into longer, more stable relationship but still be called out for her promiscuity.

Female artists, as well, are constantly expected to rebrand themselves and their identities with each new album they drop. They must constantly be changing, but also constantly look young and pretty. Male artists release the same tired songs with the same tired outfist–no complaint.  It’s unfair.

What’s worse is that there really can’t be anything done about all this; unless society decides to stop putting men on pedestals for the bare minimum, or decides to give men the amount of critique and effort that female artists have to constantly struggle with.

Katy Perry has been labeled one of the greatest pop stars of all time. Her music constantly rakes in huge success and she is loved by millions. She has had nine #1 hits on the billboard 100 charts, 13 Grammy nominations, and is the fifth best electronic selling artist of all time.

Each one of her albums is from a different era of her performing life, with her constantly reinventing her image–whether it be her liberating Witness era, or her sweet and poppy One of the Boys era. She has been able to always adapt her style and appearance to please her fans, as they pressure her to make new music.

On the other hand, Maroon 5 is a band of somewhat of the same level in popularity. Lead singer, Adam Levine has also raked in massive success, and has millions listen to his music. It seems like every new song of his is played on the radio non-stop for hours on end. Maroon 5, however, has not had a single reinvent of their image. They have been releasing the same bland vanilla pop for almost 20 years now, and they are riding the wave of popularity. You can play a song of theirs from their 2002 album Songs About Jane, and a song from their 2019 album Red Pill Blues, and the change in sound is virtually nonexistent.

The fact that Perry has had to change her appearance and style many times now in her 15 year career, while Levine has been able to go 20 years without a style shift really speaks volumes.

This happened to Perry: during her Witness era, the artist was seen as crazy, deranged, and on drugs, simply due to the artist’s severe mental strain when it came to how to constantly change around her life to be seen as a well-evolving woman. According to pubished interviews with the artist, she was mentally struggling from a messy divorce and musical pressure, and people were judging her because of it.

In an interview with TV host Ellen Degeneres, Perry was obviously showing signs of a lack in mental health and clarity, to which she received mass amounts of harsh words and criticism. In the YouTube comments for the video, people were throwing tons of speculation of her using hard drugs or being drunk, and laughing/judging the emotional wreck they saw before them. One comment with over 2,000 likes by user Sidhu Siddhartha states, “Don’t drink tequila before an interview……” Another by user GENESIS with over 1,300 likes states, “Looks like Miley (Cyrus) dumped all her drugs on this fool.”

Knowing the emotional trauma Perry was under, these comments are revolting.

Similarly, Taylor Swift is a pop culture icon. With her continuous chart topping hits, and genre shifting tone throughout her entire career, she has certified herself as a legend in the eyes of many. Swift also has a reputation for being a promiscuous woman, who dates boys and leaves them for dust once she’s done with them. She pokes fun of this label in her chart-topping “Blank Space.”

Justin Timberlake, is a pop icon, too.  He is about the same age. Timberlake however, doesn’t have the reputation of being a promiscuous person. This is extremely odd, as he has had over 20 past public relationships with female celebrities, while Swift has had 12.  Granted, the number of relationships each has had is far more than the “average” person, but one artist is criticized and the other praised.

In an article from Medium a columnist rants and raves on why they don’t support Taylor Swift, calling her ‘sleazy,’ ‘exploitative,’ and a ‘preachy nag.’ The columnist states, “After abandoning her career in light country music, Taylor Swift jumped on the Euro pop music bandwagon, and took on the persona to match. To me, she comes off as a creepy, perverted, sleaze-ball.”  Wow.  That’s harsh.

This happens in high school, too.  A guy can move from girl to girl, and he is celebrated.  A woman breaks up and starts a new relationship, and she is shunned.

The fact that Taylor Swift is seen as some dating fiend, while Timberlake is seen as a well-to-do artist, speaks volumes. Both artists have similar chart-topping, up-tempo, pop songs and both are around the same age. Swift and Timberlake are extremely famous and have millions of adoring fans. So it’s extremely unclear and astoundingly unsettling that one is branded as a succubus, and one is seen as a sweetheart.

Another disparity between artists and their public view is seen within artist Lana Del Rey, and artist Hozier. Lana Del Rey built her career on being an alternative singer who writes about being in love with older men and doing it for money. This, however, was early on in her career, and Del Ray has constantly been changing her music genre and taste. Hozier has done the same thing; with many songs about love- it’s complexities and intensities at the same levels as Lana’s. His alternative music has relatively stuck within the same category of genre and taste, and has followed suit with his career.

It’s extremely unfair how both of these artists are beautiful in their work, but one has the negative sexual connotation to their name, while the other has none at all. The disparity is practically yelling itself out, and it’s something that Del Rey commented about herself in an Instagram post.

In the most absolute glaring example however, there is the extreme and apparent disparity between the critical reviews of a rather sexually graphic song by Cardi B and Megan Thee Stallion; and a song dealing with the exact same subject by Tekashi 6ix9ine.

Both artists have extensively skyrocketed careers as rappers, even with some past controversies in each party’s lives. Both artists released songs dealing with the exact same sexually graphic content and the two songs were released in the exact same year. The only difference is that one song was sung by a man, and one song was sung by two women. The song sung by Cardi B and Megan Thee Stallion has been slandered by critics as perverse, too extreme, and completely repulsive. The song sung by 6ix9ine has just been slandered as being a bad song.

When looking at specific critics, one can find a video by Ben Shapiro, shaming and mocking Cardi B and Megan and saying absolutely horrendous things about them. Shapiro, however, has not made a video about 6ix9ine’s song or it’s graphic nature. In fact, the only negative criticism that can be found about the song is just stating that the song is bad. There is absolutely nothing on how the song is “too sexually explicit” or “perverse.”

Junior Maddy Hull said, “There is definitely double standards in the media and in life. Women in the media are degraded and sexualized on practically everything, while men are praised for being the ones sexualizing the women. It’s disgusting.”

Senior Kayla Beam also is perturbed with and notices the clear double standards.

“I feel like it’s kind of expected for women to write breakup anthems or songs about sex and love- and the industry sexualizes them so much. It promotes the idea that women are sexual objects, and I feel like us students in school are especially susceptible to that message.” said Beam.

So how can we stop this unequal treatment?

The best way to address the industry issues, is to address our own behaviors first.

Petty comments about women in the areas of sexuality or promiscuity are dangerous. Unless those comments are given to every man and woman dealing with an above average dating life, they are unequal distributed, and end up being misogynistic and damaging. If there is a situation where a man is treating a woman with disrespect and degrading tone, whether it be a micro or macro aggression, speak up.

As well as this, people need to recognize that women and men both can talk about sex. It is repulsive to give men this blatant advantage to talk about this, while women are shamed if they bring it up. Women should not be labeled.

Youth and eternal beauty is advertised to women constantly as a necessity. If people at home don’t find it as one, the necessity of it is diminished. Being an older woman should have nothing to do with stopping someone from living their fullest; and at the same time, being a younger woman does not mean someone should dress themselves up to please others around them.

The patent truth that the imbalance between men and women is a huge issue is unmistakable. In the year 2020, a time of modern thought and treatment, this imbalance should be ruptured and torn down. It’s reprehensible that these mindsets are still instilled today; they should be abolished entirely. Hopefully in the future, people will either offer women the blind eye they give men for their actions, or they treat men with the same reprehensible devastation they’ve given women. Until that day, equality is just a whisper in the distance.