What’s all the buzz about the spelling bee? 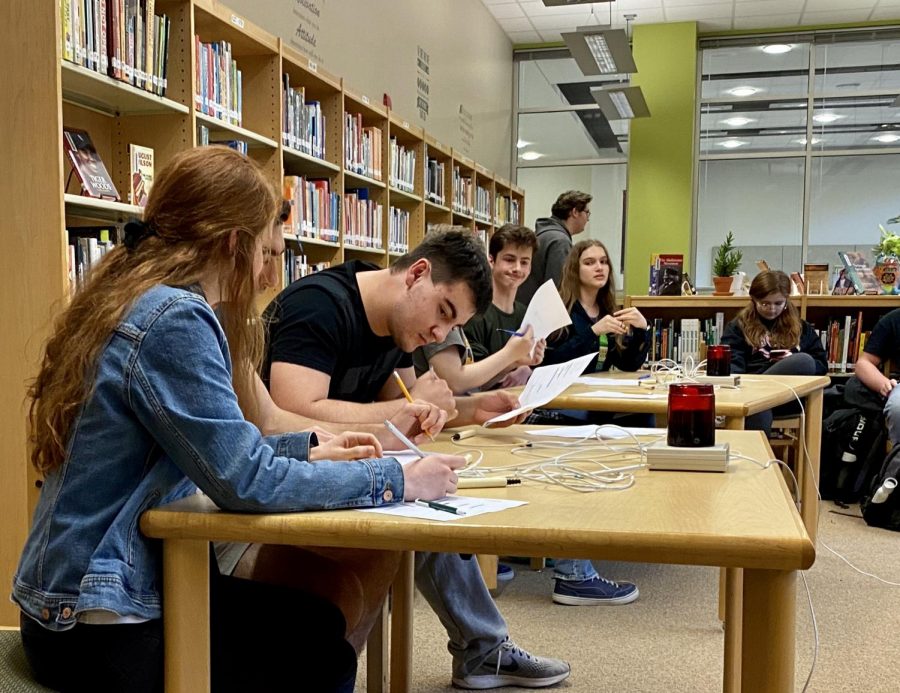 Emily Webb and Ethan Hart consult on how to spell a word in the second round.

by Bailey Bennett, Reporter
The short URL of the present article is: https://lhslance.org/ldyg4

Can you spell “Scherenschnitte” (the German art of cutting paper with scissors)?  If you are a member of the winning spelling teams, NEHS and Academic teams, maybe!

On February 27, the NEHS held its seventh annual spelling bee in the Learning Commons after school. Competing in the spelling bee were staff, members of the National English Honor Society (NEHS) and academic team members. This year, the event was organized by NEHS treasurer Ethan Hart.

Missing were two of the staff’s heavy hitters from the past, Tracey Cassidy and Andrew McWilliams.

The competition was surprisingly loud and interactive, more like a basketball game than a quiet spelling bee.

For the second round each team was given five National Spelling Bee championship words and could receive origin, definition and the word in a sentence, however if they spelled the word incorrectly the other teams could buzz in to steal. Following this round the staff had six points, NEHS had eight points and the academic team had ten points.

NEHS spellers, Emily Webb, Ethan Hart, and Luciano Iocco, were thrilled to get the word “jodhpurs” because they had just practiced the spelling in rehearsal–but they got it wrong.

Emily Webb was competitive, and later she confessed that in Germany she was a spelling bee champion, attending the European finals.

The academic team was also sharp, buzzing in quickly. They were strong in chemistry because Chloe Williams is serious about the Periodic Table.

The third and final round was the longest most intense round. In this round, a word would be given and the first team to buzz in would spell the word, only given the definition if requested. If the team was incorrect they would lose a point and another team could buzz in to answer.

The scores this round fluctuated up and down, but with six words left the NEHS team was down by six points and answered all six words correctly to make a comeback and tie the game.

“The spelling bee was definitely more competitive than I thought it would be. Our team had been down and we had to work together to tie it up. We worked well together, and it ultimately worked to our advantage.” Emily Webb said.

At the end of this final round the staff had eight points and the NEHS and academic team were tied at 20 points. This meant the spelling bee would go to a sudden death tie breaker.

Following this there were three more tie breakers which still did not break the tie. This meant both the NEHS members and academic team members were the 2020 spelling bee champions.

The spelling bee champions received medals with large bee and honeycomb motif for their success.

Alex Kulgren from the academic team said, “My team’s strategy was to wait for other teams to spell the word wrong so we had more time to confer, then buzz in. We also would ask for the definition (during the third round) to buy more time before answering.”

On the other hand, the NEHS team’s strategy was to buzz in as quickly as possible to be first, ask for the definition to buy time, then try their best to spell the word even if they didn’t know.

Following the spelling bee Ms. Murphy stated she was not upset to lose, but rather happy to see students who were skilled spellers. She said it “restored her faith in today’s youth.”

There were only a few spectators present this year; however, all in attendance had a great time, Connor Browne said, “Going into it I wasn’t really expecting much, but by the end of it, it turned out to become extremely exciting, nerve racking and a riveting experience.”

Next year Mr. Brown has high hopes for the spelling bee. “Mr. Brown and I are talking about expanding the event to PREP and holding it in the auditorium so that more students can see the fun,” said Mrs. Natalie Rebetsky, NEHS advisor.

Overall participants and spectators had a great time at the annual spelling bee this year. The seniors are sad they will not be able to compete again next year, but underclassmen and staff are already looking forward to it.

“I’m looking for redemption in 2021 after seeing the look of despair on my students’ faces when I missed the word ‘gimmick’. Next year I’m looking forward to having more time to prepare as this year I only had 16 hours notice.” said Kirkland.