Girls Varsity basketball ends in heartbreak against Tuscarora: Photo of the Day 3/5/20 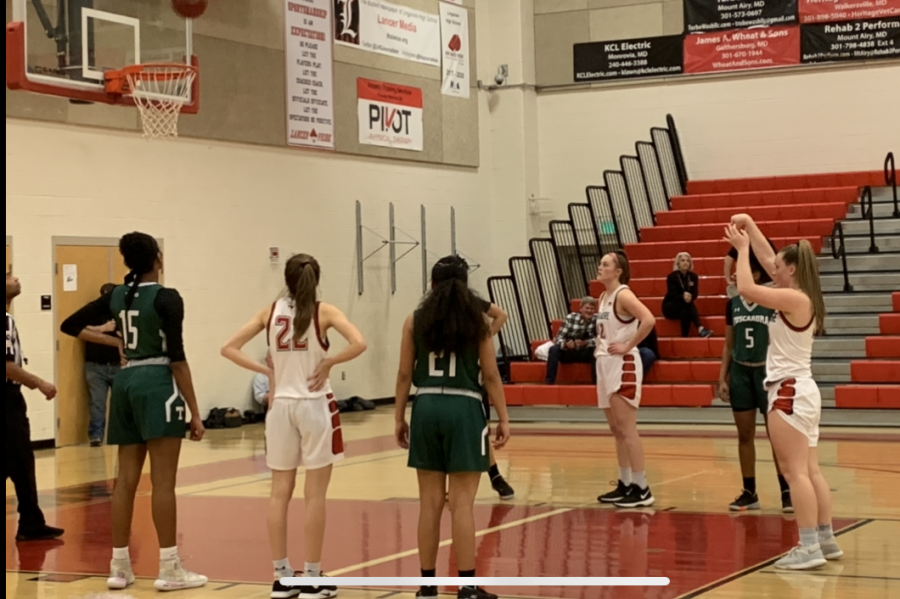 On Monday, March 2 the girls varsity basketball team fell in a heart breaker to Tuscarora 51-46 in the regional playoffs.. The final minute of this game would have gone down as a Linganore classic if they were able to have secured their third playoff victory in three years. Unfortunately, that did not happen for the lady Lancers.

“It was an upsetting loss but it did teach us a lot about what we need to prepare. Even though we won’t have three of our seniors next year, we will have most of our returning players. These are our building blocks for the future.” junior guard Darbe Reeseman said.

The game started off slowly with only a combined 23 points being scored in the first quarter. The Lancers went into the second quarter though after Junior Guard, Gabby Krystofiak three-pointer. The game would once again feel as if it were dragging on for days as both teams went four minutes without scoring. Junior point guard, Darbe Reeseman ended this drought, scoring a layup.

Tuscarora would come right back with their own layup though to keep the game close. But Reeseman scored the next seven points for Linganore giving the Lancers a sizable lead. The Lancers went into the half up six points, 24-18.

After halftime, Tuscarora heated up, and there was nothing LHS could do. The Tuscarora Titans went on a 12-3 run in the third quarter, giving them their first lead since the five-minute mark in the first quarter. The final quarter was a roller coaster of emotions for the Lancers and their fans. Senior guard, Taylor Ferguson was able to get hot from deep and got the Lancers back in the game

In the final four minutes of the contest, junior forward Allison Byrnes tied the game with a pair of free throws, and this had the Lancer fans ecstatic. To get the crowd even more pumped up, Gabby Krystofiak hit a three-pointer to take the lead by three. However, every time the Lancers carried any type of momentum Tuscarora was able to shut it down with answers of their own. In a close competition the Lancers season would fall short at the hands of the Titans 51-46.