Who will take the cake at this year’s Mr. Linganore 2020 cake decorating competition? 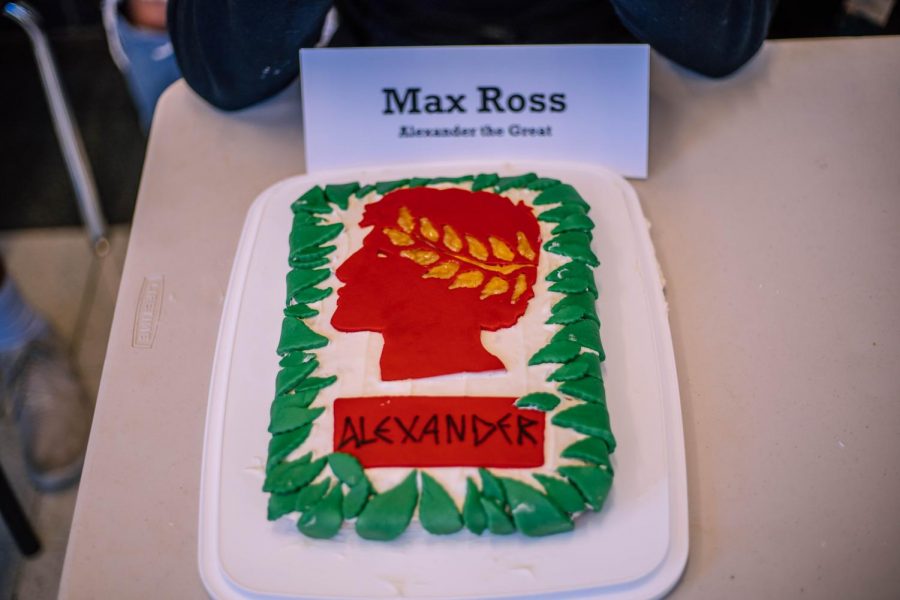 Max Ross' cake includes a silhouette of his character, Alexander the Great, made fondant.

by Emily McNally and Kayla Beam

On March 4, the seven Mr. Linganore contestants became bakers in the annual cake decorating competition, which took place in the cafeteria during the third lunch shift. Each contestant’s cake was themed after a specific character they will be portraying in the contest.

To get in the spirit for decorating their cakes and add some fun to the competition, the contestants each wore a bakers hat and apron, while their escorts wore an apron.

“Curse me and my gigantic head,” said Jeremy Hilton when putting on his ill-fitting baker hat.

The cafeteria staff served as the judges for the cakes, and the winner will be announced at the Mr. Linganore competition  this Saturday on March 7.

Max Ross’s cake blew everyone’s minds with his pre-cut fondant silhouette of Alexander the Great, the person he is portraying.

“I think Max did very well in this competition and stands a chance of maybe winning,” said Ross’ escort, Hunter Levinson.

Braden Weinel’s cake was another front runner with his pre-made tree and car props relating to his character Ferris Bueller.

“A lot of the other contestants brought props, but I think that we did our best and it turned out really well,” said Emily Webb, David Kominars’ escort.  Kominars designed a circus-themed cake to relate to his character, P.T. Barnum.

The cake decorating competition was one of three preliminary contests: cake decorating, gumdrop towers and sweetheart letters. In each competition, the winning contestants gained points that will help them win the Mr. Linganore title.