Social media attracts Generation Z to vote in the 2020 election

“One vote can make all the difference” 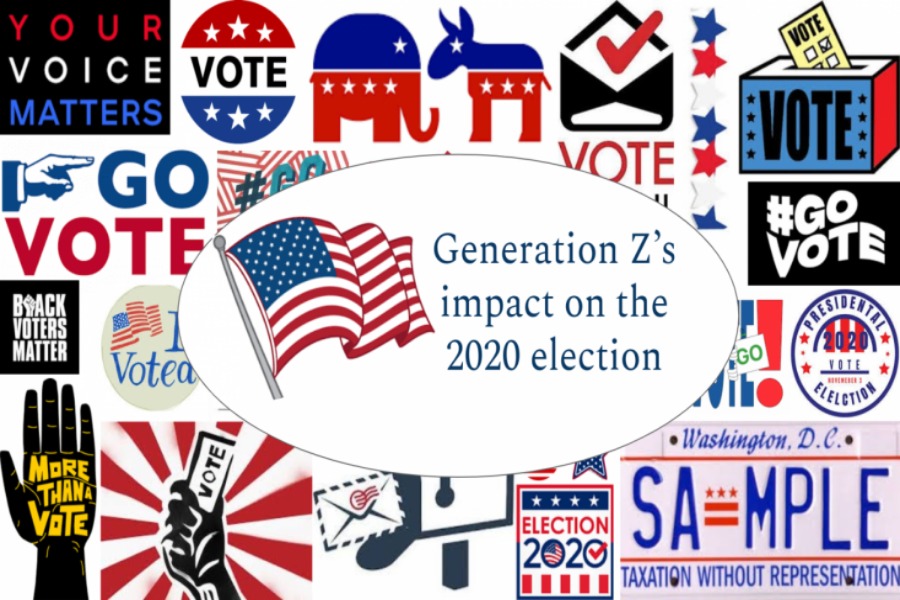 Graphic made to represent the iconic voting sticker people receive after casting their ballots.

Since 1971, all U.S. citizens over the age of 18 have had the freedom to vote. It is a way for us to use our voices and be one for a strong government. We can control who goes in and comes out of office every four years, yet more than 100 million voters did not bother to show up to the polls in 2016 according to the Washington Post. That’s nearly 43% of our country that didn’t use their freedom to vote.

The new generation of fresh voters will make a lasting impact if they vote. Gen Z alone makes up 27.7%. of the world’s population. They have grown up with a consistent influence  of news, social media, and there are few who remember a world before social media.

Many people are planning to vote in person still while respecting the CDCs guidelines for Covid and being safe. Millennial and Gen Z (ages 18-28) could make up to 37.7% of the votes in the 2020 election by registering and practicing safe social distancing guidelines.

In Maryland, all must register by October 13.

Josh Todd is someone who plans to vote in person safely on November 3. He is a senior who has grown up with social media and has used it in his advantage to educate himself and others.

“Social media has overall changed my political opinions. When I was younger I mostly listened to what my parents believed as politically right and followed that. Over time, with social media, however, I have been able to research and fully develop my own political thoughts to better see the world around me in a new light,” said Todd.

This can create a huge impact on a person’s views because they are constantly shown what’s going on in the world. With just a few clicks someone could find out that there are more than  200,000 Covid deaths in America right now, or watch horrifying events such as police brutality or the California Wildfires in real time. These current events, while as horrifying as they may be, educate others, and they are spread through the internet. This newfound education has led so many people to see what is really going on in the world and shift their political support to a candidate they believe cares.

“Social media has definitely impacted my current political views. Ever since the death of George Floyd and the Covid outbreak, my friends and I have used the internet to radicalize and educate ourselves on the current issues in the country,” said senior Nick Titus.

Many social media platforms that spread news are encouraging their young audience to go vote. Instagram, Twitter, the Apple app store,  and local radio stations have all sent out messages to their followers giving them everything they need to know to vote.

The app store has a whole section dedicated to apps that help people access voting information. It is located at the top of their page and when you click on it, it takes you to a page of 5+ apps that can help you register and check your status. This provides information to young voters who may be confused. They have made the information relevant to each person’s district so there is no room for miscommunication.

It is evident that the media influences our democracy, and local news and media can have a big impact on local government and politics. When our local news stations and politicians fail to inform us where and when to vote, they can slip away and leave many people unaccounted for.

But now for the 2020 election, radio stations like DC 101 are informing people on how to register to vote. They are informing listeners through their station about the deadline to vote in Maryland, DC and Virginia. They have a web page with all available information on registering and are even encouraging voters to call in and share why they are voting this year.

Influencers are using their platforms to inform their young voters about the current political status and what they can do about it. These social media stars have young audiences that either didn’t vote in 2016, or are now eligible to vote in 2020. Media entertainers like Lizzo and Rainn Wilson have been spreading the word by posting, and interviewing politicians during quarantine. Since these artists are well known, they are trying to use their voice to connect with politicians such as vice presidential candidate Kamala Harris.

These links take teens to real sites where they can register in their state to vote, get an early ballot, or vote by mail.

How has our local community been affected?

There are many people running for local government positions in both Maryland and Frederick, yet remain unknown to so many. Their platforms are sm,all and when people vote, they often choose at random or don’t vote all all because they don’t know who anyone is. This could impact both the candidates future and the stability of our local governments.

“I have researched a lot on the current political candidates both locally and nationally. The local candidates are often overlooked because they don’t have as much coverage in the media, but that doesn’t demote their importance to our country,” said Titus.

We often overlook our own communities when looking at what our population or citizens can do for our democracy. But many eligible students here at Linganore can make an impact through voting. Each citizen gets a say in our county, state, and country government and it only takes a few clicks to become a more educated voter.

Senior Mackenzie Berry is focused on both local and national politics and is registered for early, in person voting this fall.

The impact of local voices

The League of Women’s Voters has also made a huge impact on the voting community since 2016. Between 2016 and 2018 alone they have reached more than 10 million new voters and inspired them to join the league or register to vote. They spread awareness and educate young voters in many ways.

Maryland has a large network of women’s voting leagues that reach out to inform, and inspire young voters. The local Frederick County League has been extremely successful in educating voters both male and female on their voting rights.

This league is open to anyone to join and helps by going to events to spread the message about voting.

“We have added so many new voting registration events in the past several years. We emphasize that every vote counts by going to high schools to connect with young people. We help them to register to vote and learn more about the confusing process,” said Mary Coker, Co-Vice president of the League of Women’s Voters in Frederick County.

The league also regularly attends civil and local events to register voters. By putting their message through to local groups, they can reach more people.

“The league often goes to naturalization ceremonies to register new American citizens to vote. They are so excited about becoming a citizen and eager to use their new rights. We also go to events such as the black lives matter marches to show our support and share our universal message,” said Coker.

Maryland of many states has also implemented the process of registering to vote when a person obtains a driver’s license. This process went into effect in 2018 and has been strong ever since. Compared to other states, Maryland is making good progress at registering eligible voters, and as of early 2020, 66.3% of eligible voters are registered.

“Registering the amount of young voters that we have here in Maryland is astonishing compared to states like Pennsylvania or Ohio where they do not offer a process like this,” said Coker.

Whether you choose in person, early voting, or voting by mail, you can make a difference.