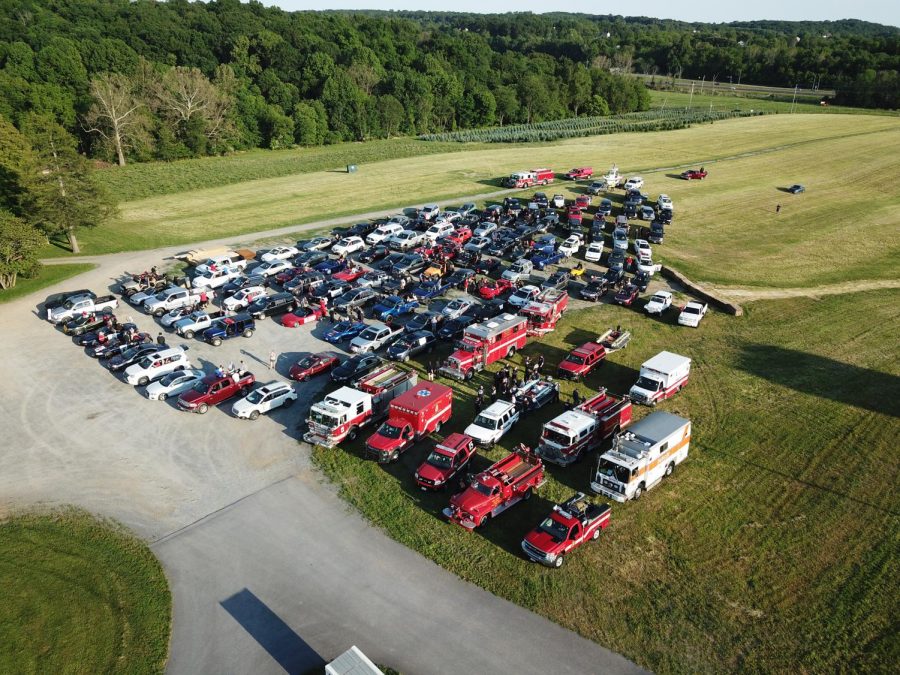 A drone captures the graduates gathering at Gaver Farm before the clap out.

Going to school for four years and having an abrupt end without a graduation, prom, or even an official last day was rough on the seniors. Luckily, the caring families of this community did everything that they could to give the students a proper send-off.

Parents created groups on Facebook such as the adopt a senior page which lets other families “adopt” one of the graduates and send them gifts to brighten up their day. The most recent way that the community has come together to recognize the graduates was the clap out on June 2, featuring a parade of seniors who drove from Gaver Farm through Main Street, New Market. Along the route, hundreds of people cheered on the seniors including their parents, families, and even school staff.

Lisa Gaver was informed of the planning of the clap out when an employee asked if the parking could be held at Gaver Farm.

“We didn’t really know what to expect, and I don’t think anybody did, but the outcome was great,” said Gaver.

Seniors showed up in the beds of their trucks, some standing through their sunroofs, and even some in a boat. This event exceeded the expectations of many seniors,

“I absolutely loved it! Seeing the community come together for us was great,” said Aidan Shaw.

There were more than just seniors and families attending the clap out The New Market Fire Department sent out everything that they had to help out,  a total of 14 different vehicles to be in the parade. It didn’t take much to convince Chief Ben Nalborczyk to help out.

“Our department is fueled by Lancer pride!” said Chief Nalborczyk.

“I felt we needed to recognize our wonderful seniors. There was so much support and the students were so appreciative,” said Martinazzi.

Before local families came up with the idea of the clap out there were already ways that the school and families were starting to recognize the seniors. Prior to graduation, school staff setup signs for the seniors in the parking lot at the school with their names on them. Other signs were also made for families to put in their yard and let people know that a senior lives with them. The Lance wrote a story on these signs in April.

Everything went so well that families are hoping for another clap out next year, even if there’s a graduation.