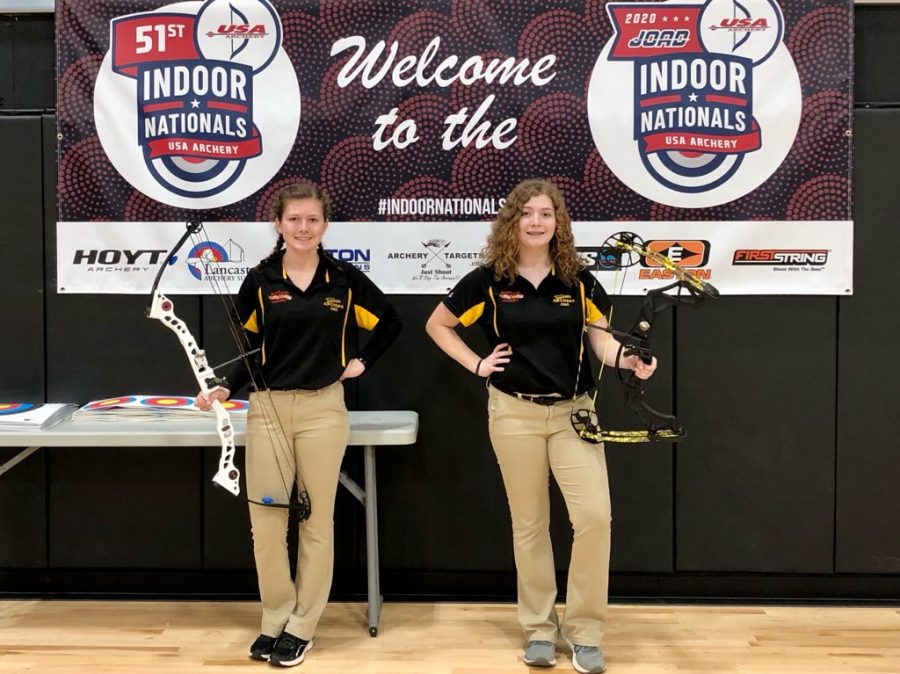 Lindsay and Aubrey Toothaker at the Indoor Nationals competition.

by Emily Lotito and Abbey Sovero

Katnis Everdeen and the Hunger Games is an imaginary character who has archery skill.  She can’t compare to the real-life Toothaker sisters who continue to excel in archery, even in the pandemic.  They practice less frequently with their teams but more frequently in the back yard and in basement.

Lindsay and Aubrey Toothaker have been very successful competing with the  JOAD (Junior Olympic Archery Development Program)  team at Tuscarora Archers. The two were to compete at the outdoor Nationals in Decatur, Alabama but were cancelled due to the pandemic.

How did they become archers?

Few teens know about the local archery scene.   The Toothakers are part of regional groups where they sharpen their skills.

“I got into archery at a Girl Scout camp that offered archery as an activity. I liked it, so I started doing youth rec classes at the club [Tuscarora Archer],” Lindsay said.

“I got into archery after Lindsay started doing [archery] and started out just doing youth classes when I was eight or nine,” Aubrey Toothaker said.

From going to rec classes offered at Tuscarora Archer to competing on their JOAD team:

“I got into competing by joining the JOAD after doing a youth archery league, which was kind of a taste of competition in a more basic, less competitive way,” Lindsay said.

Robin Hood had a wooden bow and arrows, but times have changed and so has archery equipment. As hunting and competitive archery have expanded, so has the gear.  Lindsay and Aubrey use a large selection of equipment for training and competitions.

“I shoot a compound bow, specifically a Mathews C4 with a Shibuya high and Dead Center stabilizers. I have two different sets of arrows; one for outdoor or field and one for indoor,” Lindsay said.

Lindsay is left-handed, while her sister Aubrey is right-handed. This calls for a different bow use and customized equipment for each sister.

“I shoot a Mathews C3 bow with the same type of sight stabilizer and arrows as Lindsay. But all my equipment is for right-handed people. My bow is marble green with purple strong and matching arrows,” Aubrey said.

“Competitions are usually about 3-4 hours long. For indoor competitions,  we shoot 60 total arrows for a highest possible score of 600 points. Indoor shoots can have 20-40 archers at a local competition, but there can be hundreds at the national level competitions,” said Lindsay.

“The highest level of competition I have shot was Indoor Nationals back in February. I was supposed to go to Alabama for Outdoor Nationals but it was cancelled due to COVID-19,” Aubrey said.

“I wasn’t surprised when I saw my results. I placed in the middle of the group which isn’t bad considering my age group is the most competitive age range,” Lindsay said.

“My team used to practice one a week, usually on Wednesdays. But due to the pandemic the team is now split into three groups based on skill level. Those groups practice once a month. We have a space in our basement that has a target so we can practice there if the weather is bad,” Lindsay said.

All athletes get to experience making memories with their team but with the current pandemic state, many have to reflect on those memories and “relive the good old days.”

“I think my most memorable moment from archers is when we had a field tournament and it poured down rain for half of the shoot. My shooting group was in the middle of the woods when it suddenly started raining monsoon-style. We couldn’t see the target or anything in my sight tape, which tells me where to adjust my sight to hit the target fell off. I had to guess where to aim for the rest of the course and it was super difficult,” Lindsay said.

“My favorite memory was the Lancaster Classic back in January. The Classic is a national shoot, and people travel all over for it. There were people with Sweden jerseys and one girl on my scoring bale came all the way from Hawaii. There were 500 kids shooting on my line, and it was overall a very cool experience,” Aubrey said.

With Lindsay being a Junior, she has started looking at what her future will be. Will she continue with archery through college?

“I really want to shoot on a collegiate team. Now that I’m a junior and have started to look at colleges, I am trying to check out colleges with established teams. Some well known teams are at James Madison University, Texas A&M, and Michigan State,” Lindsay said.

Whether they are practicing, competing, or having fun, Lindsay and Aubrey are ready for an adventure! They enjoy archery and can’t wait to be able to compete again