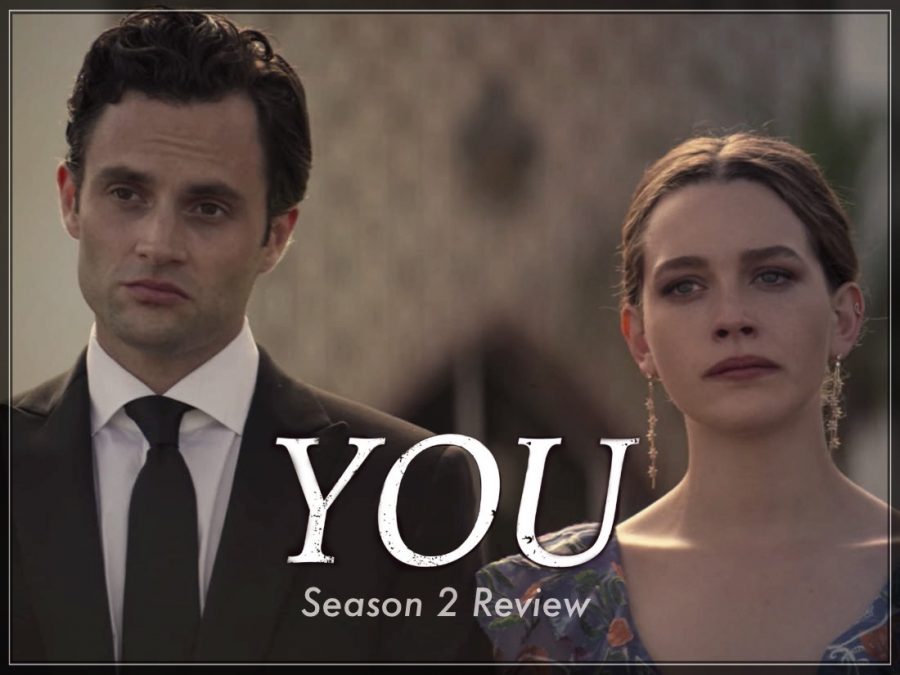 The second season of 'You' was just as destructive and mentally draining as the first.

by Joshua Todd and Jenny Davis
The short URL of the present article is: https://lhslance.org/47pw3

Warning: This article contains spoilers for Season’s 1 and 2 of Netflix’s show You.

Netflix’s second season of the hit series You is guaranteed to disgust you to the core. The stalking and murder of the innocent people in Joe’s life, mixed with the countless scenes of macabre, makes the skin crawl. Even with these horrifying characteristics, this show is finely crafted. The intensity and suspense plays out like a symphony, drawing viewers. Your stomach is turning, but you can’t look away. It’s hypnotic.

Season 1 went beyond all my expectations. It needed a perfect sequel to match its magnitude, and Season 2 lives up to the hype.

For those who missed Season 1, it begins with Joe (portrayed by Gossip Girl star Penn Badgely), deeply obsessed with Guinevere Beck (portrayed by Elizabeth Lail). Joe stalks her social media to learn all about her personal life and everything he needs to know to frame himself as the perfect boyfriend. There’s only one thing wrong with Joe’s plan. Beck is in an on-off relationship with an arrogant entrepreneur named Benji (portrayed by Lou Taylor Pucci). Joe rids this obstacle by kidnapping and murdering Benji, complete with a bizarre glass cage.

Season 1 continues with betrayals, more murders, creepy stalking, and false confessions, all set in the basement, bedroom, and the woods. I was sweating the whole time I watched the 10 episodes – and of course, I watched them back to back.

If you’ve never seen the show, you may be wondering, “Why on Earth would someone want to watch a show like this?”

It’s not a show that anyone would watch with enthusiasm for the main character. This show takes the dark and taboo topics of psychological manipulation, stalking, and murder and presents them in an extremely appealing way. Joe isn’t just some crazed narcissist who kills for the thrill of it. He plans everything meticulously. No matter the intelligence Joe possesses, however, he still is a psychopathic murderer.

The psychology behind the universal obsession with psychotic individuals is tricky to conceptualize. Whether it be a real-life glorified serial killer or one from fiction, the deranged state of the minds of these individuals draws the common individual in to poke and prod the morbid details. It’s unnerving yet fascinating to know someone would be so desensitized and willing to commit such heinous crimes with little regret or remorse.

A prevalent theory among the psychologists, is the idea that the population treats these unsound individuals as childhood-esque monsters. Children are obsessed with monsters like Sully from Monsters Inc. as they don’t understand how fake these monsters are. The adult mind is more developed. Adults, unable to be frightened by these childhood figures, look for real-life monsters to scare them.

The creators of the show know that Joe’s cruelty won’t make the audience view him as a protagonist. A rational person he’s a bad person with bad intentions, and the lengths he goes to to satisfy his obsessions are grotesque. This means that the creators must use psychological manipulation to captivate their viewers.

To make the audience to see him as the protagonist, they constantly use the narration of his thoughts within his daily life. This is reminiscent of another television psychopath, Frank Underworld from House of Cards. This narration is witty and sharp. It constantly shows the struggles he has, and the way that he views his situation as a positive. The show forces you to see the way he sees. In turn, this causes the audience to grow an emotional attachment to Joe.

The biggest thing from this season is Joe’s new love interest, the quirky deli worker Love, (portrayed by Victoria Pedretti). Love started out in the series as a ‘Beck 2.0,’ a factor that most looked at as a cheap ploy for a carbon copy of the first season. As the story progressed however, this idea turned out to be wrong. Throughout the season Love was forceful in her vie for Joe’s affection; much more forceful than Beck ever was. It comes to fruition later in the season that Love isn’t the person the show put her out to be.

Love is just as psychotic as Joe, if not more. It was a moment that not many could see coming. This whole season she framed herself as a perfect idealistic partner. There wasn’t really a show that she was crazy. This however could be seen the same if we watched the show from her perspective. Joe doesn’t have a show that he’s insane; he’s very charismatic and charming. If we saw what her mind was like, we could have seen Joe as the same perfect idealistic partner. The pair are incredibly toxic together, in their obsession with death for love. It plays out in a mind bending way this season.

This entire season was filled with the most graphic and disheartening deaths all to support the relationship between Love and Joe. The couple had gone through so much together, and to end the season with Joe unsatisfied with the partnership he has with Love is one of the most annoying season cliff-hangers imaginable. It’s almost as if the entire season had no real meaning, and that it was all just a lead up to another morbid relationship waiting to happen.

You is based off of the best selling series Hidden Bodies by Caroline Kepnes. I recommend viewers read the books in their wait for Season 3.

Look out for Season 3 to include return of Joe and Love’s new neighbor. The travesty of a cliff-hanger ending Season 2 shows all signs that Joe has his eyes now on his neighbor and that his feelings for Love aren’t all that real. It’s going to be interesting how he will go after her when he has a partner as crazy as Love watching his every move.

Along with this, we can expect to see Joe and Love’s parenting skills. This will be difficult for the director to walk the line of what repulses viewers – hurting a baby will drive away audiences.

I also think Ellie deserves some vengeance. The pair stole her childhood, and her one remaining family member. The girl has been through the absolute most, and needs some reconciling in some way. She is a fan favorite who ended up with a broken life.

We’re obsessed with You and can’t wait to see what the future seasons have in store. If it’s anything like the first 2 seasons, it will be one fascinating yet draining watch. You can stream all episodes of Seasons 1 and 2 of You on Netflix right now with a valid membership.