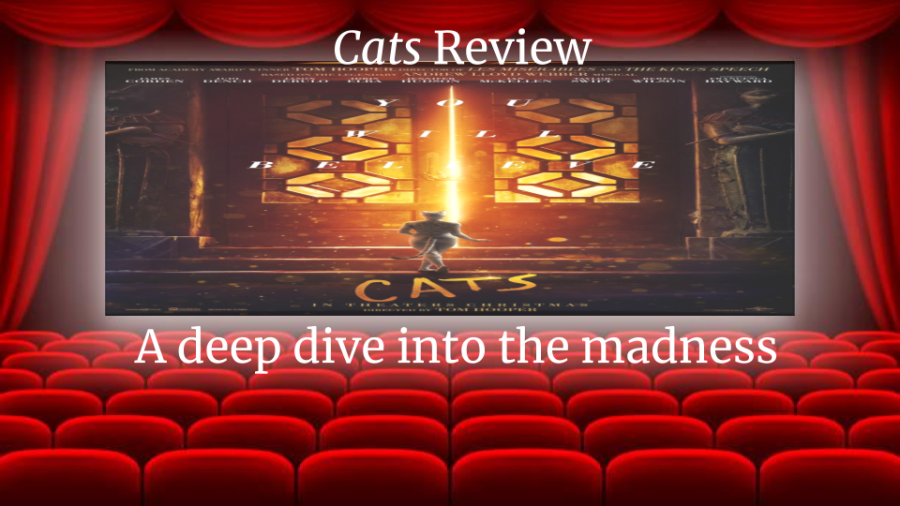 Cats, its crazy and scary.

The famous Broadway musical Cats has been adapted into a movie, and “meow” it’s a bit more than strange. The plot of the movie follows the musical pretty well, but the most unsettling part of the new movie is the incorporation of CGI animation. Watching half cat half people is not something enjoyably or pleasant to the eyes.

Rated PG, Cats is a movie the whole family can see, but maybe you’d rather watch your own cats– sleep.

The plot of Cats follows an experience of a new stray dumped on the street, Victoria. She meets the Jellicle cats, a gang of cats. These cats are gathered for one night each year to see who will ascend to The Heaviside Layer and come back to a new life. Basically, Old Deuteronomy who has had a great life, comes down to choose a cat who is worthy enough to have the same life she does, and they all come together and have a ball where she chooses the next cat. It’s a really weird story to begin with. The story originated from a poetry collection Old Possum’s Book Of Practical Cats (1939) by T.S  Eliot, and the original story is stranger than the movie.

This movie isnt short of celebrities, with stars like Taylor Swift, James Corden, Idris Elba, Jason Derulo, Jennifer Hudson, Judi Dench, Ian McKellen, and Rebel Wilson. It seems to have a lot of potential, but comes up short. The film managed to lose 37 million dollars. Producers spent over 95 million dollars, and only made back 58.7 million at the box office. They got a rating of 1 star on Rotten Tomatoes; that’s a 20% approval rating. It’s no wonder why it has such a low rating.

One of the biggest reasons I think the movie flopped is because of the CGI. Almost everything in the movie is made with CGI and makes the viewer lose the magical feeling that the Broadway production and the classic 1998 movie have. I feel like the movie tried too hard to make the actors look like cats. They lost sight of the simplicity of the original.

In the 1998 version the actors were actually in cat costumes which made it feel more real instead of the cats in the 2019 version unzipping their “fur”to reveal clothes, like Rebel Wilson’s cat, who did this to reveal a sparkly vest and more fur underneath. How does that make any sense?

The opening song, “Jellicle Songs for Jellicle Cats” lasted 7 minutes, which is terribly long for not understanding what is going on if you’ve never seen the Broadway version. Then the second “song” in the film, “The Naming of Cats” is like a bad poetry session about the cat’s name, which would make anyone want to leave their seat. Thankfully, director Tom Hooper cut 40 minutes off of songs and dances from the Broadway version. If the movie was any longer than an hour and 50 minutes, I think it would have lost a lot more money than it did.

Overall this movie isn’t worth watching online. None of theses cats deserve a new life.