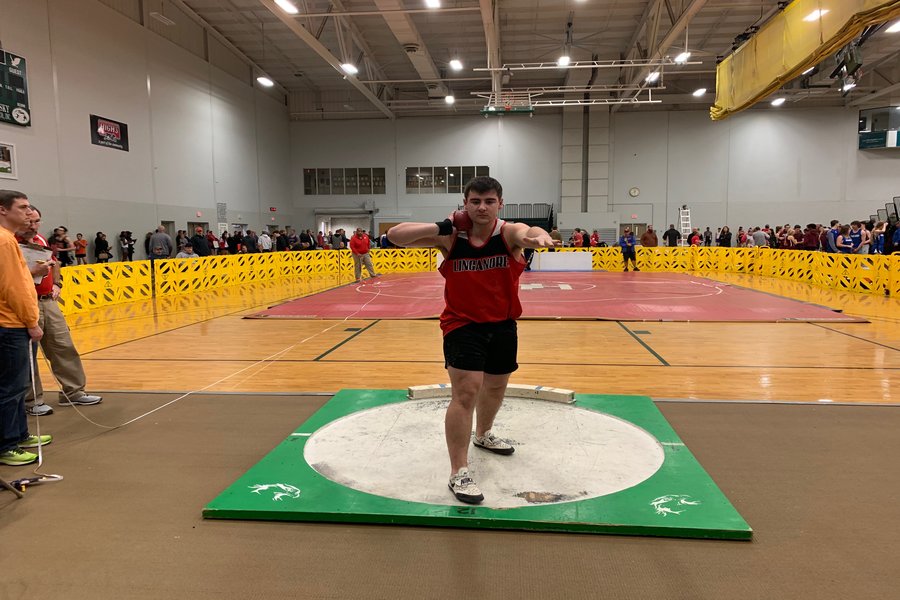 On Friday, December 20, the boys and girls indoor track and field teams competed in the Smithsburg Invitational at Hagerstown Community College. The teams definitely had something to celebrate going into winter break as both the girls and boys team placed third in the meet. The majority of Linganore athletes were also able to leave the meet with personal records (PR.)

Despite losing many talented seniors in their sprinter and mid-distance events, the boys team surprised their competition with a total of 61 points. Athletes who placed in the top six for their events were awarded points going to their team’s overall score.

Junior Xander McClure, joining the team after a state-contending football season,  placed third in the 55 meter dash with a PR of 6.93 seconds.

The boys team also gained points from John Sears (senior) and Alex Kullgren (freshman) in the 3200 meter run. Sears placed third with a time of 10:48.81 and Kullgren placed sixth with a time of 10:57.34. Both athletes were able to PR.

The 4×200 team consisting of Carter Holsinger, Aaron Dufresne, Samuel Metzner and Adam Liston placed fourth overall with a time of 1:40.28.

Per usual, the boys teams gained many points from their athletes competing in the field events. Carter Holsinger placed first in pole vault with a height of 14-06.00 feet. Sophomore Quinn Ruch placed fifth in polevualt after vaulting 10 feet. In the shot put, senior Graeson Ruch placed second and had a PR after throwing 46-05.75 and senior Ethan Hart placed third after throwing 45-09.25.

The girls team was also very successful as they ended the meet with 43 points, just barley placing third over Brunswick with 42 points.

The girls excelled in their distance and mid-distance events, gaining most of their points in those two categories. Sophomore Mikayla Moxley placed first in the 800 meter run with a PR of 2:30.98. Senior Abigail Parker placed fourth in the 3200 meter run with a time of 13:43.64.

Similar to the boys team, the girls team also has many successful athletes in the field events. Senior, Myah Davies placed first in the Pole Vault with a PR of 9:07.00 feet. Juniors Stormie Yinger and Morgan Miller both placed in the shotput and had PRs. Yinger placed second after throwing 33-05.25 and Miller placed sixth after throwing 28-03.25.

The boys and girls indoor track and field teams will compete next in the Western Maryland Winter Classic at Hagerstown Community College on Friday, January 10.