JV and Varsity girls soccer tie to the Bears on Youth Soccer Night: Photo of the Day 10/22/19 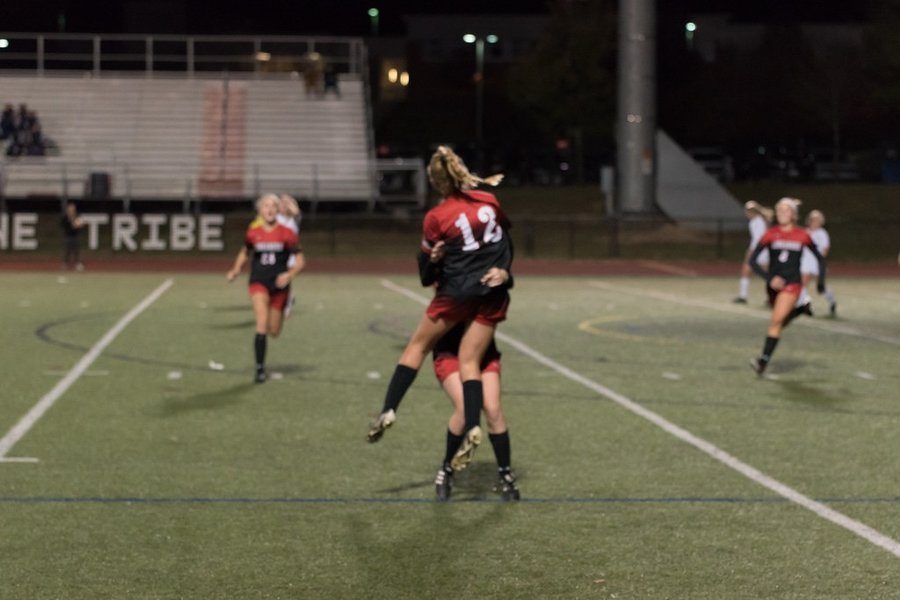 Taylor Ferguson and Nora Salter celebrate after Ferguson's goal to tie the game.

On September 17, girls soccer wrapped up the regular season with their last game against Oakdale. The stands were filled for both JV and varsity as a group of students from Mr. Roger Rich’s Management and Entrepreneurship class were challenged to create an event management project.

Tabitha Knedeisen, Valerie Ducos, Taylor Mitcham, Erica Blockinger and Jordyn Vetter chose to create a Youth Soccer Night in which they invited the local girl’s youth soccer team to the final regular season game. With help from their classmates, the students hosted several activities, including a raffle, Rita’s coupon giveaways and a half-time competition on the field.

“The best part about hosting the Youth Soccer Night was getting to experience what running an event would be like, because that’s what I’m interested in doing as a career. Being able to experience this at a younger age was very helpful,” said Knedeisen.

It was a perfect night to host the Youth Soccer Night as both the JV and Varsity soccer matches were extremely close, and, unfortunately, both ended in ties.

Early on in the JV match, Payton Arneson scored off an assist by Melanie Barger to put the Lancers up 1-0 going into the second half. After battling hard to keep their lead for the majority of the game, the Lancers gave up a goal to Oakdale from a long ball kicked outside of the 18-yard-box.

Despite the tough end to the season, the JV team had an extremely successful undefeated record of 9-0-2.

Differing from JV, the varsity girls were down 1-0 going into the second half with a goal from Oakdale Senior, Sam Foster. Despite the defensive efforts to stop her from going to goal, Foster managed to shoot outside the 18 yard box, high enough to be out of goalie, Rebecca Marakovitz’s, reach.

After a rough first half for the Lancer’s, the girls came out determined to change the current outcome of the game. Unlike the first half, Linganore was dominating, passing quick enough to maneuver around the many Oakdale players crowding the middle of the field. After multiple attempts to score, the girls still struggled to put the ball in the back of the net.

With only minutes left in the game, the girl’s were finally given the perfect opportunity: a free kick. Per usual, Senior Taylor Ferguson, stepped up to take the kick. Ferguson shot the ball, placing it in the upper-left corner of the net, just above the goalie’s head, in what seemed like an effortless fashion. The girl’s held their own for the rest of the half until the whistle was blown to signify the beginning of the first ten minute overtime.

After a stressful overtime for both the Bears and the Lancers, neither were able to score again, causing the game to end in a tie.

“I think as a team we played pretty good and kept the ball on their side of the field most of the time. For me, it was really stressful to play defense considering I hadn’t played in the past games,” said Junior defender, Allison Byrnes. “I think there was some opportunities for us to score however, the game was pretty much evenly matched.”

The Varsity girl’s record of 8-1-3 have put them first in the region going into the playoffs, and gave them bye week for the first round. Come support the girls in their first playoff game on Saturday, October 12 at 5:00 PM at the Linganore stadium!