Gelhard is ready to shake and bake at Mr. Linganore 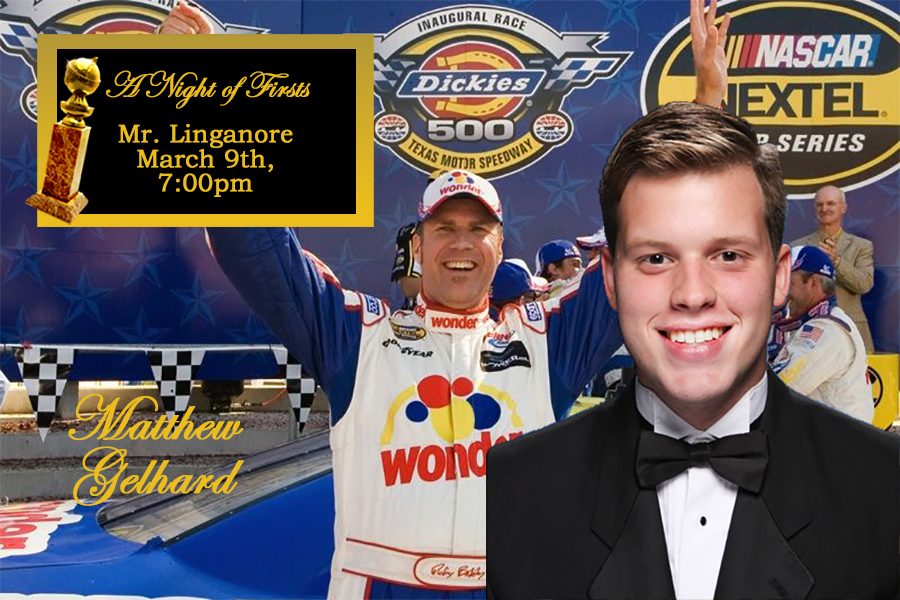 by Grace Corbitt and Emily Love

Matthew Gelhard will be portraying Ricky Bobby in the Mr. Linganore 2019 competition. He chose Ricky Bobby because he thinks that Will Ferrell’s character in the movie “Talladega Nights” is a unique one in the world of comedy. With the theme “A Night of Firsts,” Ricky Bobby was the first NASCAR driver to have Wonderbread be their corporate sponsor.

Gelhard will be escorted by Emily Byrnes. “I think we work together really well, and she always has a really great attitude which not only makes the process fun but makes me feel confident and enjoy the moment,” said Gelhard.

Gelhard is a member of the varsity baseball team and hopes to play in college. He is also a member of NEHS, NHS, Quill and Scroll Honor Society, and Lancer Media. Gelhard has a strong confidence when it comes to public speaking and says he is not afraid to be funny.

Gelhard has been playing baseball since he was five years old and has been passionate about it ever since. He has played on the LHS baseball team for all four years of his high school career. He also plays on the American Legion post 191 summer league team and has won 2 state championships on this team.

“Matt is one of the hardest workers on the team and it shows on the field during games” said Dylan Miller, Gelhards manager.

“I like to smile, and I like to have fun. My humble confidence will help me put on a show.” said Gelhard.

Gelhard decided to participate in the competition because he went to the show in 2018 and had many people tell him he should participate his senior year. Gelhard said he is most excited for the energy in the building during the show, and the feeling of pride in his school when the show concludes.

“I’m most excited to support him and show everyone our awesome dance moves. I’m also happy that he decided to be in Mr. Linganore because he has had a lot of fun with all of the guys,” said Emily Byrnes, Gelhards escort.

Gelhard is extremely excited for the competition. He says he is a little nervous that his ideas may be too outside of the box. “There’s a lot of moving parts for my talent. I’m still working on it,” he said.