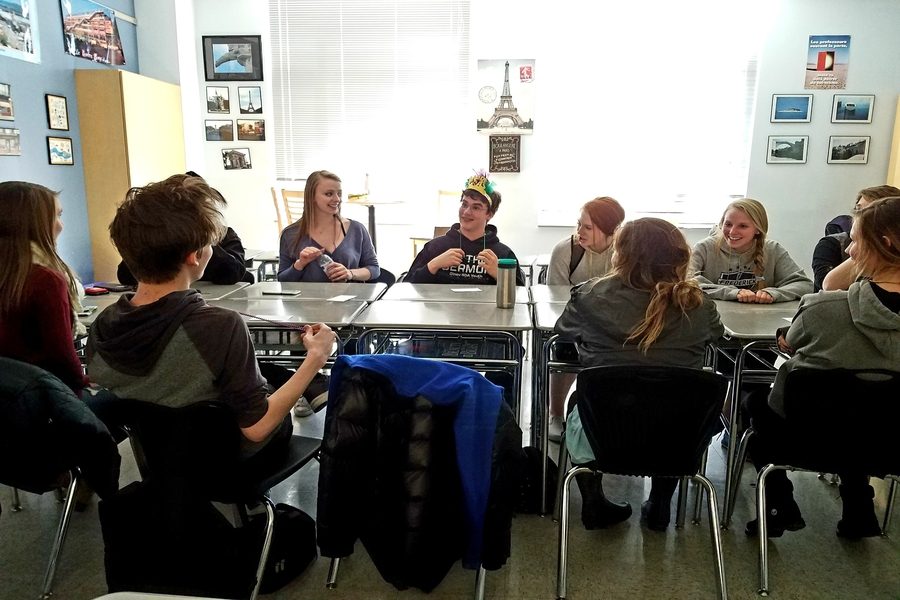 On March 4, the French Honor Society celebrated Mardi Gras, a tradition of parties, galas, parades, and feasting, that dates back thousands of years. It was established in the United States in the 1700’s and takes place on the day before Ash Wednesday, or the first day of Lent.

In its Christian religious significance, Mardi Gras is literally translated in English as “Fat Tuesday.” People would eat the remaining fatty foods, sweets and meats before the 40-day period of Lent.

Even before the Christian holiday, for thousands of years, people celebrated the oncoming spring and fertility.  On the day of Mardi Gras in New Orleans,  people wear colorful masks and costumes and fill the streets with parades. So many people take part in the festivities and feasts, that it is an official holiday in Louisiana.

The city that is arguably the most known for its excitement about the carnival in Louisiana is New Orleans. In the 1730’s Mardi Gras was openly celebrated in New Orleans for the first time after its establishment in 1718.

Traditionally a “King Cake” is made or bought by the host of a party and a little ceramic baby is placed in the cake. Whoever finds the baby in their slice is the designated “king” or “queen” for the night. Finding the baby (representing the baby Jesus) symbolizes luck and prosperity, as well as the responsibility of making the cake or hosting the party for the following year.

The French Honor Society participated in this tradition as well. Member Anna Arrington made the cake using a cinnamon roll recipe.

“I picked a recipe that was fairly simple and I think that it turned out pretty well. It was very colorful and fun.” Arrington said.

Although a baby could not be placed inside of the cake, French teacher Dragana Blonder crowned Micah Brown as the king.

The Honor Society decided to celebrate by playing of a game that was adapted to simulate a night in New Orleans.

“I saw a similar game in a movie and I found online that a teacher adapted a version to reflect New Orleans culture and thought it would be a fun game to play,” said French Honor Society adviser Dragana Blonder.

During the game each member was given a card with a specific role like, “Le Roi,” or “King” written on it. Each title had a role to go along with it, but in the end a victim would be chosen by the “Prêtresse Vaudou” and “Poupée” roles. Once the victim is chosen, everyone would open their eyes and try to guess who the “Prêtresse Vaudou” and “Poupée” were. The winners would be decided by if the member who had those roles were guessed correctly.

“I enjoyed the game because it let us learn a little about the culture of New Orleans,” Dana Kullgren, a member of French Honor Society, said.

Celebrating French-American holidays continues to spread French awareness and to get students excited to learn about other cultures. This is important so that the students can have different perspectives and more of an understanding of the French culture.