So you want to be a music major? 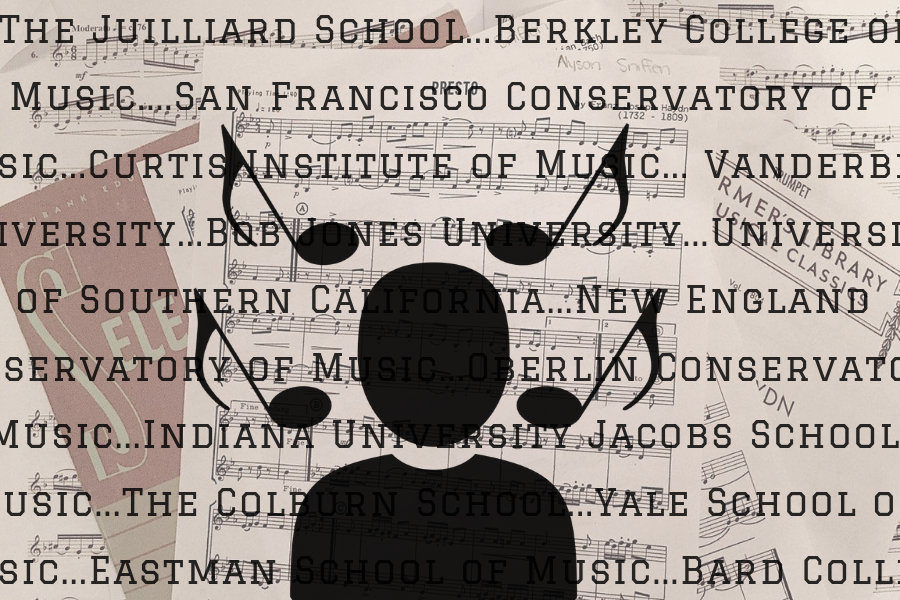 It can be stressful at times, but majoring in music is worth it in the end.

by Alyson Sniffen and Elizabeth Anderson

“Choose a job you love, and you will never have to work a day in your life.”

These words were spoken by the Chinese teacher and philosopher Confucius, yet they are quoted even today centuries later–despite the fact that most people are forced to work for a paycheck and not their own enjoyment.

Fortunately, this is not the case for most people who choose to major in music, despite the stigma surrounding them.

So what do you do if you want to major in music?

First, look what you can do as a high school student. Collegeboard.org  recommends that you play in as many ensembles as you can to gain experience, take private lessons on your instrument or work with a voice teacher, take music theory classes, and go to summer music camps.

“In high school, I played for or sang in every music ensemble,” said jazz musician Eric Byrd. “I played violin in the orchestra, snare drum in the marching and concert band, piano in the jazz band and choir, and sang in the concert choir. It was a great experience.”

The Academy for the Fine Arts is the most extensive, rigorous program for music and arts students at FCPS. Students who participate with a music focus attend TJ High for part of their school day (similar to the way CTC functions) and are a part of solo recitals, chamber work, and small groups. There is a more personal focus to this program than there is at an individual school.

The next step is to set criteria for colleges and do your research. You have the option to go to a university or a conservatory.

Conservatories are very competitive to get into and tend to have a more intimate learning environment. Universities, while not quite as rigorous as conservatories, can provide just as much experience and education, if not, in some cases, more.

“WMC had nothing going on musically. I regretted my choice until I met the recently deceased bass teacher Bo Eckard,” said Byrd. “When I was a freshman, he told me, ‘Stick around. We’ll build a program together.’ He created the jazz program and I was totally hooked into playing jazz.  I never stopped.”

Since that time, Byrd has gone on to perform with his jazz group The Eric Byrd Trio at a multitude of venues. He has also played at former president Barack Obama’s inauguration celebration and has opened for Grammy winners. Byrd is a Jazz Ambassador with the State Department and the Kennedy Center, as well as a Grammy voter.

It’s clear that you can be successful no matter where you attend college as long as you’re passionate and determined.

While researching schools, look into the specific professors you may be working with. After all, they will be the people you will be auditioning to, and, if you meet their standards, will be working with on-on-one. Emailing them with questions and taking lessons with them can help you decide if they’re the right teacher for you.

Looking into audition requirements is important because you will need to audition for the school’s program. It’s best to create a spreadsheet (Google Sheets and Microsoft Excel are great resources) and highlight continuities between the requirements of different schools. It’s much less time-consuming to learn three or four pieces as opposed to ten.

It may seem enticing to chase after big name schools, but in many cases, lesser-known schools can offer you more playing experience.

Lloyd attended West Virginia University for six years and obtained his bachelor’s and master’s degrees in music from the school.

Sianna King, a senior in the music program, will be attending Shepherd University next year as a double major in music education and piano pedagogy.

Double majoring is an attractive option for many music students. It can often ease fears about job opportunities because it widens the scope of one’s education. Double majoring can encompass two music tracks or a music track and a track such as computer science or psychology.

King hopes to become a music teacher in the future.

“I love music and want to help share this passion with others. I want to see people grow and learn as a result of my teaching,” she said.

The last part of the road to becoming a music major is practice. Go back to basics like scales and rhythms, study repertoire and audition music, and play pieces you enjoy so that you never forget why you love music.

Make sure you perform your audition music as well, in front of anyone who is willing to listen. Auditions reflect performance skills as opposed to skills in practice. The only way to truly optimize your audition is to perform for others as much as you can.

Once you get into a college, university, or conservatory, the opportunities are endless.

“I was a part of the marching band, symphonic band, symphony orchestra, percussion ensemble, and new music ensemble,” said Lloyd. “I took courses in music technology and composition and performed at both chamber and solo recitals.”

He was also able to tour the United States, and even travel outside of the country. His favorite experience as a music major was getting to travel to Japan with West Virginia’s percussion ensemble.

It takes an enormous amount of patience, study, and perseverance to be successful as a music major in college, but that is the case for most other majors as well. In the end, it pays off.

Besides being a music teacher for 31 years (24 at LHS), Lloyd has performed with rock, commercial, and jazz groups, spent seven years with the Millbrook Symphony Orchestra, traveled internationally to perform, and designed sound or written music for over 100 plays, 12 of which have been off-Broadway.

It may seem challenging to be successful if you weren’t born a prodigy, but hard work is all being a music major really comes down to.