Where is The Antique Capital of Maryland? Academic team wins first match of the season with trivia expertise 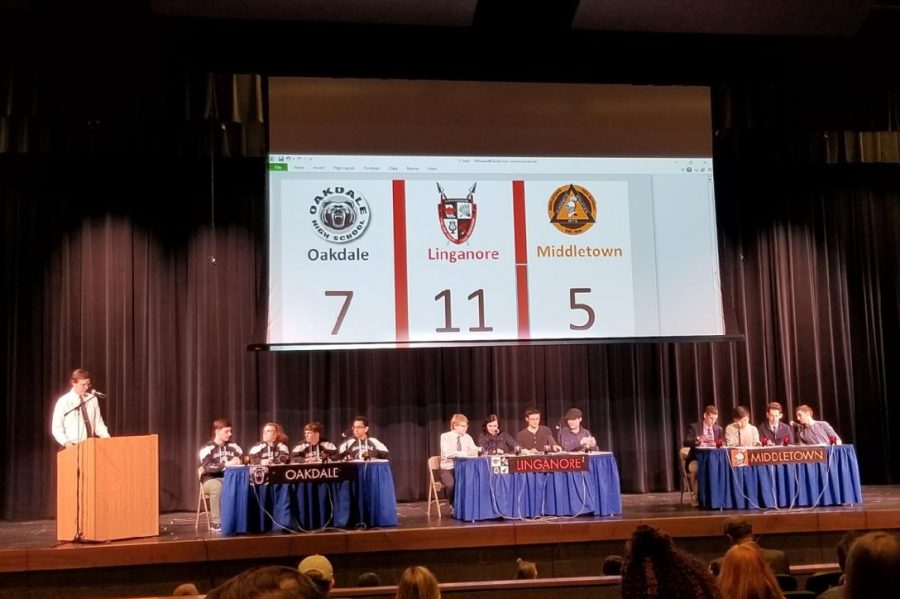 Gunnar Eklund, Presley Dougherty, Ben Melluso, and Zach Hudson confer on a question during Round 3.

On January 4, Linganore competed in their first match of the season against teams from Oakdale and Middletown and beat both teams with their accuracy and speed at the buzzer.  The final score was 22 (LHS), 18 (Middletown) and 9 (Oakdale).

The announced category for this match was NFL. Four students, Dominic Barbagallo, Gerald Fattah, Allen Hopkins, and Ashley Perise, competed in this category and studied up on NFL-related trivia before the competition.

Perise, who is now in her second year on the academic team, prepared for this competition by researching NFL statistics online and through almanacs.

Perise said, “I was nervous going into the match, but not scared because I had Dom, Allen, and Gerald there too.”

At the beginning of the fifth round, Linganore was in the lead with 17-10-8 and maintained the lead to the end.

Zach Hudson, who is new to the team this year, said, “I feel pretty strongly about our performance. We had a big win tonight, and we broke 20 points!”

The coach of the academic team, Christopher Hahn, said that this match was amazing for the team.  “There were so many contributions from new faces, and older members really stepped up this year.”

However, Hahn also said that a lot of members were reluctant to buzz in until they were sure about their answers. “People need to be willing to take chances,” he said.

“It was so much fun to watch,” said Hahn, “and the kids did a really good job working together as a team.”

Three members of the team (Gunnar Eklund, Gerald Fattah, and Dana Kullgren) represented Linganore on It’s Academic, the Baltimore quiz show, on December 15, 2018. These students won the competition, so they will advance to the playoffs of It’s Academic, which will air in Spring 2019.

In the winter season, members compete against other teams from around Frederick County. The winter season matches, which take place every Friday in January and February, are held at Frederick High School.

Each competition is divided into four matches that are made up of five rounds each:

Do you think you have what it takes to be on the academic team? Try out these questions, which were asked at the January 4 competition (answers listed at the bottom):

Within 60 seconds, how long does it take light from the Sun to reach Earth?
This novel was originally titled First Impressions. The heroine of this book initially thinks the rich man she meets at a dance is a haughty snob.
He was an American actor, director, and writer, and was famous for his adaptation of Julius Caesar in 1937, as well as for broadcasting over the radio the unnerving “War of the Worlds.”
Which town is known as “the antique capital of Maryland?”