Students stay silent to break the silence: Photo of the Day 4/20/19 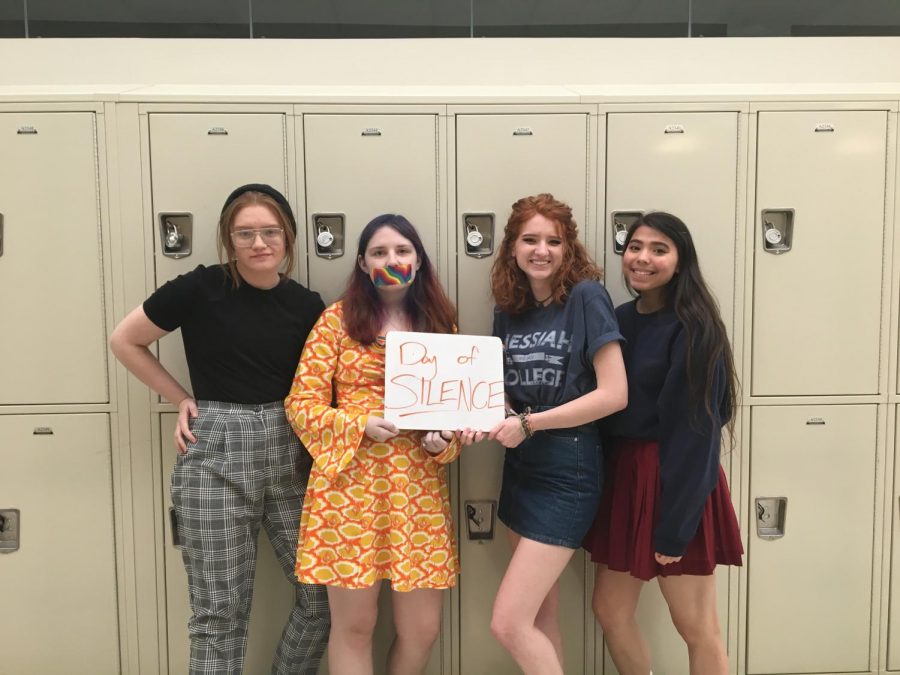 Beau Cameron, Katie Lehman, Shelby Tkacik, and Jill Kolesar, among others participated in the Day of the Silence at Linganore High School.

On April 17, students participated in the Day of Silence.

The Day of Silence is a student-led protest against bullying and harassment of students in the LGBTQ community and their supporters. LGBTQ stands for lesbian, gay, bisexual, transgender, and questioning students. From the first bell of the day to the last, students stayed silent as a way to show the silencing of their peers and, possibly, themselves.

“As someone who has dealt with a lot of bullying for being part of this community, I feel like it’s really important to put out there that there is a problem. It is important to draw attention to the fact that these are problems we face on a daily basis,” said Katie Lehman, the organizer for the Day of Silence.

Teachers were given a list to know who was participating along with rainbow ribbons that students wore throughout the day. Many students also sported other gear for the Day of Silence such as duct tape, shirts, and makeup.

Permission slips for the Day of Silence ended with an important reminder to students: “Remember: If someone harasses you while you are participating in the Day of Silence, you need to break the silence and tell the nearest adult!”

“The Day of Silence makes students more aware of LGBTQ students in the school. I hope that it makes other students aware of how LGBTQ students are treated on a daily basis and how we can be more inclusive of everyone,” said Ms. Jessica Baker, a GSA Co-Advisor and teacher at Linganore. GSA stands for Gender-Sexuality Alliance.

Ms. Jessica Baker helped organize the day by handing out and collecting permission slips, giving out rainbow ribbons, and giving out speaking cards. The speaking cards included the statement, “I believe that ending the silence is the first step toward building awareness and making a commitment to address these injustices. Think about the voices you are not hearing today.”

“When you see the other people that are participating in the Day of Silence, there is always this kind of feeling of comradery because you know that person gets it, too,” said Beau Cameron, Co-Vice President of the GSA.

The Day of Silence was made possible by GLSEN, the gay, lesbian, and straight education network. The organization, pronounced “glisten” was founded in 1990 in Massachusetts. A small group of students has turned into a leading organization for the safety of LGBTQ students at school in just 25 years. Their homepage has a slogan that reads: “Our mission is to create safe and affirming schools for all, regardless of sexual orientation, gender identity, or gender expression.”

“It’s really important to show solidarity even when it’s uncomfortable. To participate in a movement you have to take action. So I think it’s important to participate and show that you stand with everyone,” said Shelby Tkacik, Co-President of the GSA.