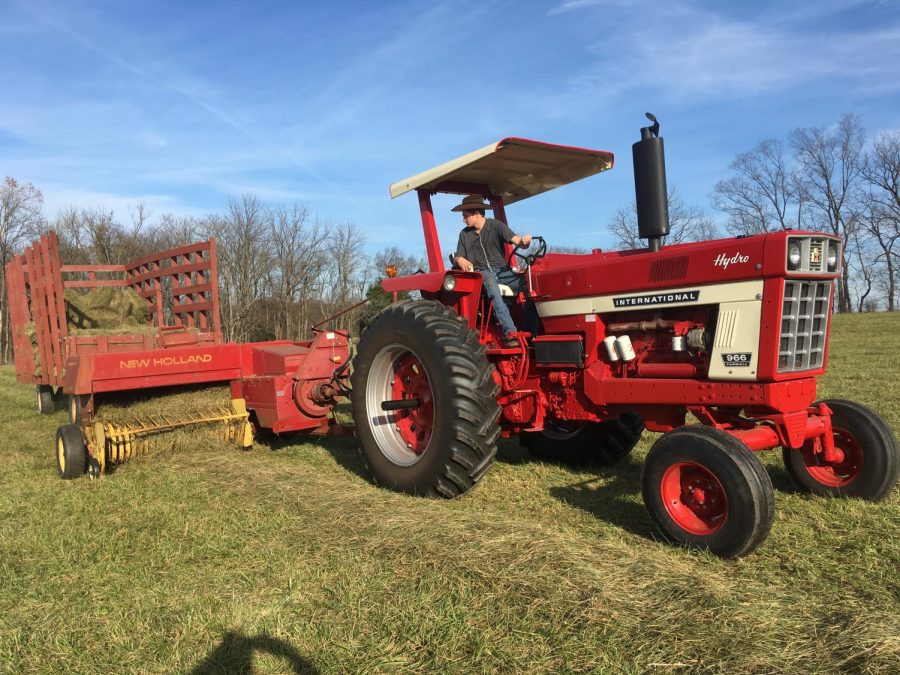 Austin Welty works on his land he leases.

Austin Welty is a senior, FFA officer, and runs his own hay business International Baling. Most students find that clubs, sports, and school alone are enough to drive them mad, but Austin not only works, he runs his own business. He has been running and improving his business for three years  and has learned so much about being his own boss.

He has 13 customers. His business is run on his 31 acres of land.

He gets help from others, too. “My family, friends, Ricky, Nate Campbell, Ryan Mondonedo, and my sister Haley Welty all have helped me run my business,” said Welty.

Hay quality is very important to Austin because he wants to insure his customers are getting the best hay for their animals. Customers don’t want hay that is moldy, too highly compressed, or has too much moisture, but they still want it to be green. He has won Grand Champion at the Frederick Fair, Reserve Grand Champion at the Walkersville community show and 1st place at the New Market Community Show.

Austin doesn’t have a dependable work schedule because he needs about a week of warm/dry weather to cut and dry the bales to prevent mold. He then needs to cut, rake, and bale the hay. Before that, he is preparing the soil, planting and tending the hay.  After harvest, he has to deliver the hay.

Sarah Welty (his mom) describes him as a living the FFA Motto “Learning to Do, Doing to Learn, Earning to Live, Living to Serve.” She said, “He is beginning to realize that planning and financial management are a key component to running a business and that hay making is a labor-intensive venture that comes without guarantees for good weather.” He makes hay from May through September and finds a time with good weather is quite difficult.

Sarah said “Austin is realizing that though he is working hard and creating his dream and passion. It doesn’t come without sacrifices being made in other areas.”

He is planning to continue his business after high school and expand from his current 31 acres. He is graduating as a certified welder and will pursue employment with that as well. He is also thinking about technical school to expand his skills.

To help support his business you can purchase his hay for anywhere between $4.50-$6.00 a bale. Contact him on facebook at @International Baling.