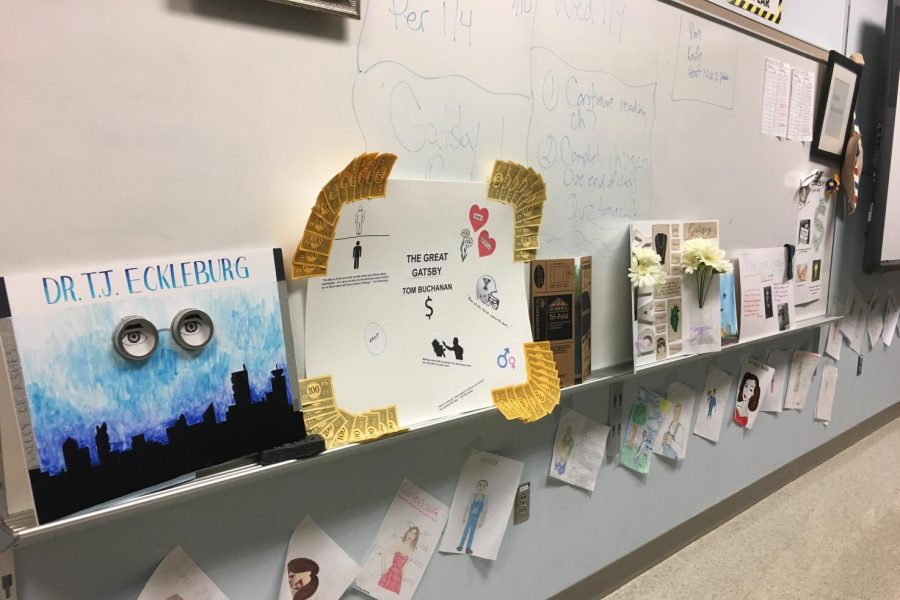 Gatsby posters lined up along the front board, just before the movie began.

After several weeks of reading, taking notes, and being quizzed on The Great Gatsby, Mrs. Patti Kolias’s English class finally reached the final project, which was to create an edible party dish from the 1920’s from scratch, a poster highlighting a theme or character, or some third relevant project idea.

The purpose of the project was to create a connection between the students and the 1920’s, giving them a small idea of what it was like a century go.

Madelyn Kahaler, one of Mrs. K’s students who prepared a dish, said “It was fun because you got to connect more with the 1920’s and eat what they ate at parties.”

The days the projects were due students of the class watched the 2013 movie, with Leonardo DiCaprio, to judge the differences between book and movie. Oftentimes when books hit the big screens, details are changed, omitted, or emphasized, which is for good analysis material but usually bad for content. In the case of The Great Gatsby, many scenes were rushed through, non existent, or altered entirely. Additionally, several modern songs were used during the party scenes, which made no sense since the movie takes place in the early 1920’s.

“The movie was good, but I liked the book better because it was more representative of the time period,” said Emily Webb.

“As students find themselves further and further away from past culture and activities, refreshing their minds with the knowledge, hearts, and minds of a particular decade allows the students to have deeper, more exhilarating experience while reading a piece of literature,” said Kolias about the book, project, and movie.