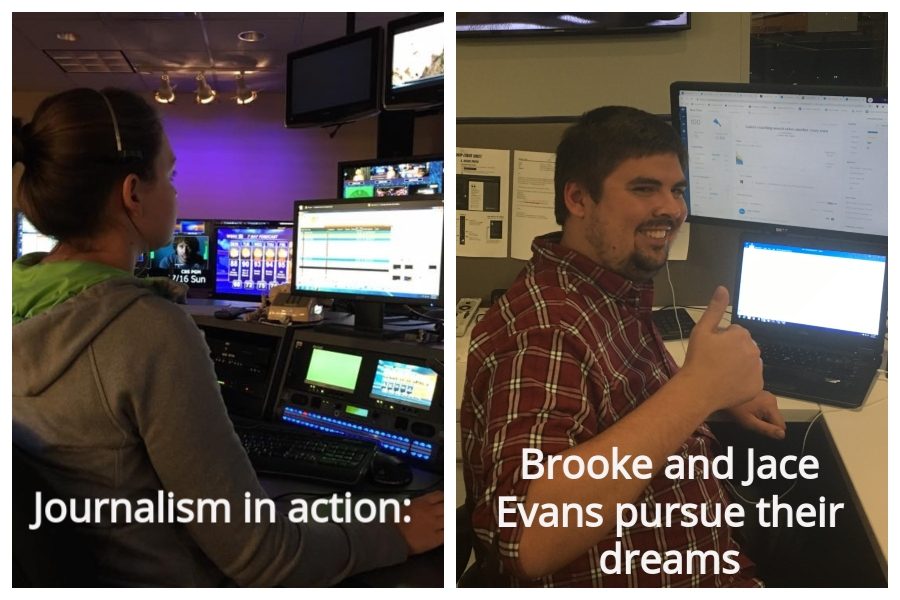 Former journalism student and 2010 graduate Jace Evans once wrote sports articles for The Lance. He now predicts professional sporting games for the whole world to see. His younger sister, Brooke, who graduated in 2013, is now a TV news producer for WBOC in Salisbury, Maryland. The Evans siblings began writing for the newspaper in high school, but the story goes even further back. Their father, Tom Evans, wrote for The Lance in 1984. Although he did not stick with the journalism path, the journalism genes were passed on to his family.

Even as children, there were hints of the their future in media. When the two were young, they would put on miniature news productions in their living room for friends and family. In fifth grade, Brooke got a chance to be on the morning announcements at Twin Ridge Elementary School, and that’s where her love for communications was encouraged. The passion for journalism continued to grow for Brooke as she looked to her older brother and saw all that he was doing.

Her brother had always loved writing and started working for The Lance his junior year. Journalism, however, came naturally to him. He even was inducted into Quill and Scroll, something his sister accomplished just two years later.

Working for The Lance, students learn how to work on digital design, video creation, and writing skills. Jace focused his efforts on writing sports stories. Brooke worked her way up to become senior editor of the newspaper.

Jace went on to study journalism at the University of Maryland and focused his work on covering sports. Despite Brooke following in her sibling’s footsteps, her story is a little different. Brooke went to American University in Washington, D.C and began majoring in print journalism. She then switched her journalism track to focus on the broadcasting part of communications.

“I knew I never wanted to be on air, but I always liked to write,” said Brooke.  At WBOC, she coordinates all of the news coverage.  “I write the stories that are in the show and arrange them in the broadcast, so what you hear the news anchor read, those are my words.”

Jace began interning for USA Today sports in the spring of 2013. In college, he interned for USA today three times. Directly following graduation, Jace got a job at the Des Moines Register, a newspaper based in Des Moines, Iowa, where he worked for two years. Finally, in July 2016, Jace turned his college internships into a full time job for USA Today sports, in Los Angeles, California. Jace covers major sports news around the nation, including the NCAA men’s basketball tournament, the NHL stanley cup playoffs, and the NFL offseason.

Through college Brooke did internships as well. She was titled an editorial intern at Bethesda Magazine, as well as a digital desk intern at NBC Washington over her final two years of college. Brooke’s biggest strength in the communications field is the physical writing aspect, but with the way modern journalism is going, she also mastered the digital production side. Her current job as a news producer encompass both writing, and digital production, as well as planning and organizing the order of events for her show.

“It all started back when I was little. I knew I wanted to be in some way involved with journalism,” said Brooke.

Both feel lucky to combine their passions with their careers.

Jace said, “Brooke and I have the same degree; we work in the same field; but our jobs are drastically different. I think it’s cool that there are so many different pathways you can go down in the world of journalism.”