Carols welcomed in the winter season at Holiday Concert: Photo of the Day 12/11/19 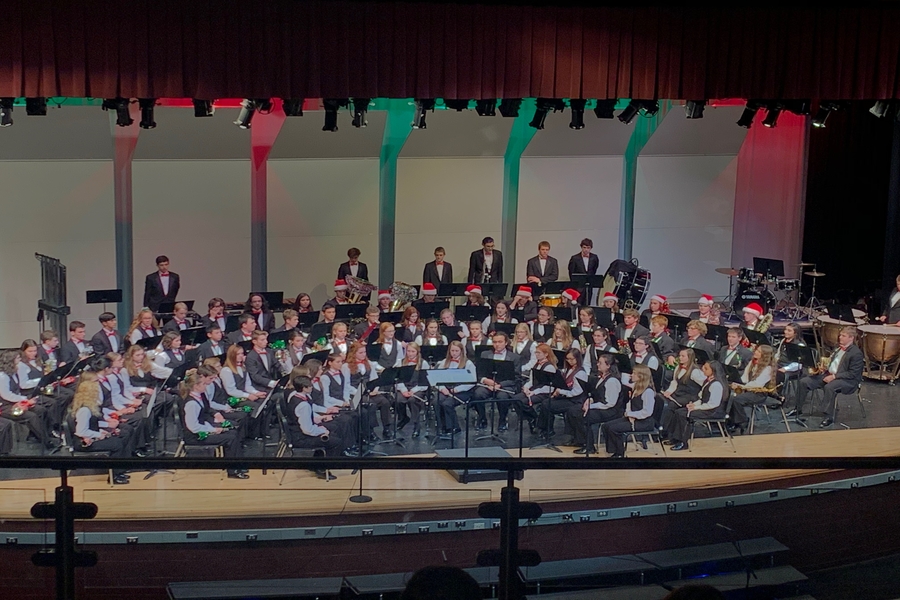 The Concert band prepares to play.

On December 10, family and friends came to the auditorium to get into the Christmas spirit and watch the 2019 Holiday Concert. The concert had music from the guitar ensemble, Merry Tuba Christmas, concert choir, percussion ensemble, and concert band. The concert was conducted by teachers Kevin Lloyd and Damon Dye.

The Guitar Ensemble played four songs “Wassail Song,” “What Child is This,” and “The Holly and the Ivy.” The ensemble’s finale song of, the night was “Baby, it’s Cold Outside,” with vocals by Senior Jack Maerten and Junior Mackenzie Berry, with Nick Pare on electric guitar.

“Lots of work goes into the concerts. It’s awesome to see such a big turnout. Musical performances are fun. I love singing so it was super fun to share that passion with everyone who attended the concert,” said Jack Maerten.

The Merry Tuba Christmas performed four songs. “Sleep O Holy Child of Mine” by Carlo Boler, “Silent Night” by George Frideric Handel, Lo, “How a Rose E’re Blooming” by Michael Praetorius, and “We Wish You a Merry Christmas.”

The Percussion Ensemble performed four songs. “Morning has Broken,” “The Gaelic Melody,” The Friendly Beasts From the Medieval French Carol,” and “Good King Wenceslas” by Piae Cantiones. Their final song was “Christmas Eve Sarajevo” by Robert Kinkel and Paul O’Neill.

Following a brief intermission, the final group of performers were the Concert Band. They played five songs.”I Saw Three Ships,” “Veni, Veni” by Thomas Helmore, “Sleigh Ride and a Christmas Festival” by Leroy Anderson, finally as tradition, the closing song of the night was “White Christmas” by Irving Berlin, which featured vocals by the concert choir as well as former choir alumni.

As the performance went on, outside the season was being welcomed in with snowfall.