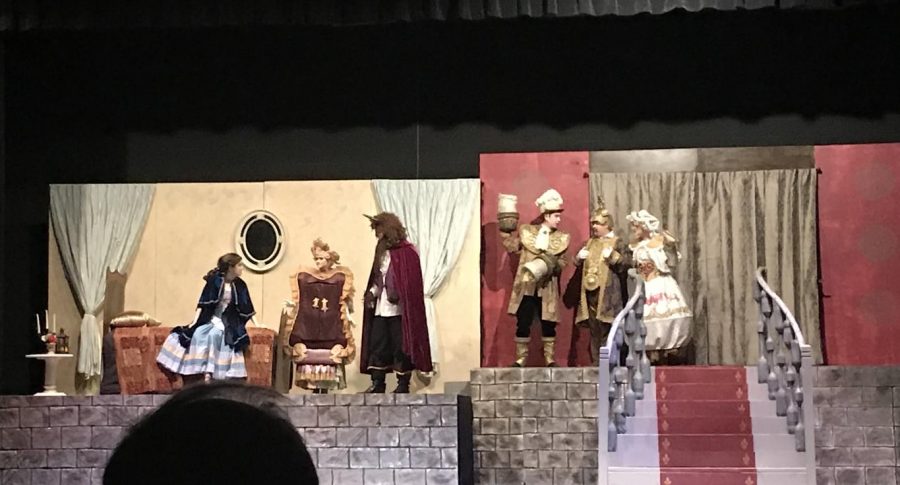 Throughout the weekend, Beauty and Beast drew larger and larger crowds as word of mouth spread about the near-professional production.

Co-Director Angela Smithhisler said, “I am extremely proud of the students! This was the first time selling out two of the three nights for the drama department which is a very big deal for us, so I was glad that was able to happen. The cast and crew really rose to the bar  and went above and beyond.”

Leading the cast were Mackenzie Berry playing the role of Belle and David Kominars playing the Beast. Sophomore Berry hit lots of high notes in her songs throughout the performance. Kominars was able to act the emotions of the Beast in a very professional way and amazed the crowd with his performance and appearance–the makeup was transformative.

Sophomore, Ella McCaffrey said, “I really enjoyed the play and the chemistry that all the actors and actresses had was amazing. The cast and crew did a great job with the play.”

Sophomore, Josh Todd played the role of Belle’s father and said, “The play was one of the best experiences of my life. I felt like the whole cast and crew came together as a family to pull this amazing show off. Although my role was small, it felt like it had a sense of importance because Belle’s life revolves around her father.”

Smithhisler said, “I love that the show inspires students to become the best version of themselves, and it teaches the students lots of life lessons throughout the play. It was even a lesson of maturity during auditions because students were put in different roles to see which one fits them best and what vocal ranges were for them. This was a three day process worth of acting, singing and dancing in order to see who fit each role the best.”

Marsha Thompson, Media Specialist, had a small cameo role as the bookseller in the opening number, which surprised and delighted students and staff.  Several students from local middle schools were also involved.