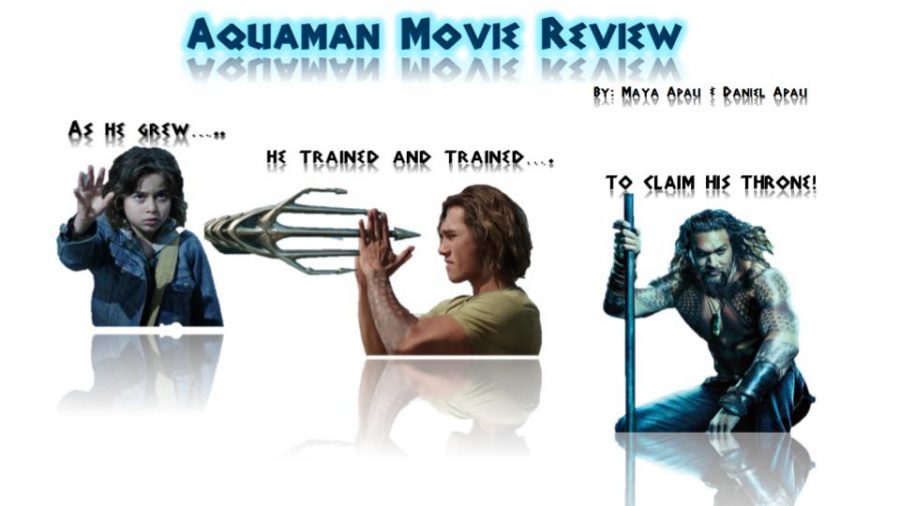 by Maya Apau and Daniel Apau

Will Aquaman remain in Atlantis or on the stage of the Oscars?

Imagine if you were split between two worlds: Atlantis and Earth. For DC Comic  underwater superhero, on land he is Arthur Curry, and underwater he is Aquaman.

Aquaman is a Warner Bros, DC Comic movie that is about the city of Atlantis being under the rule of King Orm, who happens to be Arthur Curry’s [Aquaman] half-brother. Aquaman is the only person who swims  in the way of the throne that King Orm wants. Yet Orm tries to convince Arthur that he will never be accepted in Atlantis because he is a half-breed: half-Atlantean and half-human.

He may be able to speak to fish but he’s also able to break the box office.

Aquaman is a DC Comic Book character alongside Batman, Wonder Woman, Superman, The Flash, and many more. On Sunday, January 6 it was reported that Aquaman has “become the highest-grossing DC Movie of all time.”

Meanwhile the film Batman v Superman: Dawn of Justice  and Aquaman are both films about the Justice League, When it comes to DC Comics and Marvel, Marvel is better. With the long and ongoing rivalry between DC and Marvel, the way that Marvel builds up the storylines, action is portrayed, and the special effects, Marvel would win any argument.

In the DC Comic film Aquaman, the special effects range from the Kingdom of Atlantis and the way they are able to swim underwater to the multiple different sea creatures.Yet these effects can’t compare to the way Marvel creates them, having the audience believe as though the movie is real. In the hit superhero movie of the 2018 summer, Marvel came out with one of their final Avengers movie: Infinity War. Now the special effects that were used in Infinity War were honestly out of this world. The effects were so good because they must be used to portray specific character such as the Hulk and Thanos.

But despite all said, if the film [Aquaman] had the suspense factor and fantastic special effects, this film would’ve been worthy.

Does Arthur Curry [Jason Momoa] welcome us to the surface or drop us into the deep end?

Now you may ask why bash Aquaman but still say that you’re a fan? In our opinion Momoa is a nice addition to the DC family and so is his character’s talent, strength, and passion. Like said before even though the movie was missing certain components, the characters themself bring bonus points!

This film starred many of our favorites from Jason Momoa [Game of Thrones] and Amber Heard [Criminal Minds] to Nicole Kidman [Big Little Lies] and Julie Andrews  [Sound of Music / Mary Poppins], but if we had to pick the best, Andrews would win. In the film, Andrews plays the creature Karathen. Karathen’s doesn’t have any facial features since she’s a underwater dragon. At first it’s hard to figure out who in the world is the voice behind this antagonizing creature but slowly enough you begin to realize that it’s the famous “spoonful of sugar” actress. Andrew’s mysteriousness in this film by far make her our favorite and the character of Karathen brings more intensity to the movie.

All in all, Aquaman is a great movie because not only does it have amazing horrific flips  from Aquaman and Mera jumping from building to building and stunts of Aquaman and King Orm battling off on the burrier of fire  that make you jump but it also has death-defying scenes about family.

So go to the nearest theater, grab some popcorn and CLAIM YOUR THRONE!