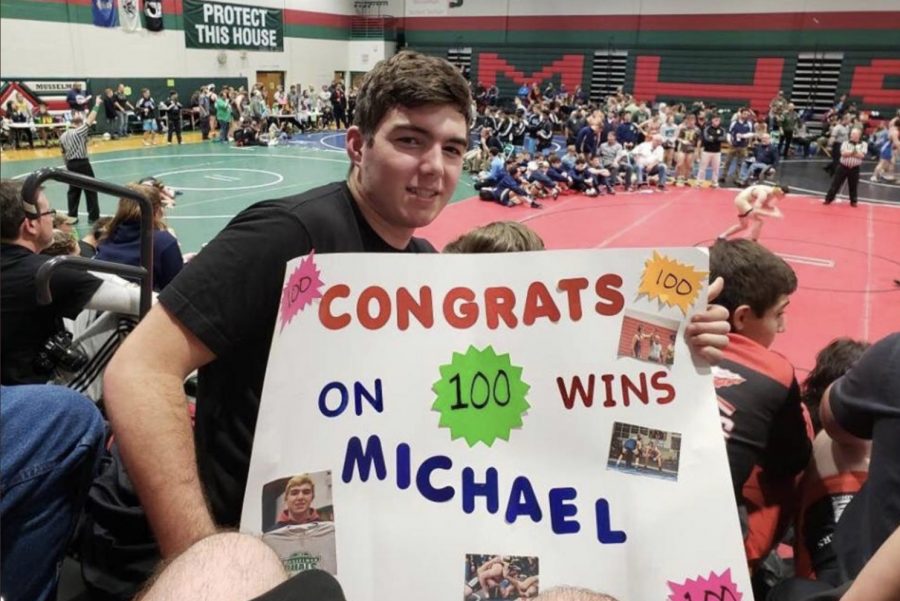 by Braden Weinel, Reporter
The short URL of the present article is: https://lhslance.org/2reux

On Saturday, December 15 Michael Bromley collected the 100th win of his high school wrestling career. Bromley, senior and three-year captain for the Linganore is wrestling in the 182-pound weight class. His overall high school record at the end of December is 108-40.

The 100th win came at a dual meet tournament at Musselman High School on December 14 and 15. On the first day of the tournament, the team won all four matches beating Smithsburg, Musselman, Courtland, and Hampshire High Schools. Linganore ended the tournament with five wins and three losses.

The Lancer’s overall record is 9-3 following a victory over the Urbana Hawks. This is the first time in school history that the Lancers have beaten their rivals. It is especially noteworthy because this is Coach Ben Arneson’s third year coaching Linganore, but he previously coached the Hawks, taking them to two state chapionships.

Bromley won seven out of his eight matches at the Musselman tournament. In 2017, Bromley placed 2nd in the Maryland state wrestling tournament in the 170 pound weight class. He was also the county champion and named First Team All-County by the Frederick News Post in for the 2017-2018 season.

Despite the 100th win pressure, Bromley went into his matches with the same mentality as always. He pinned his opponent in the first period of the match, making it a quick and easy win.

“It’s a pretty big milestone for wrestlers, but it’s still early in the season, and I have more goals I want to accomplish,” said Bromley.

This is his eleventh year wrestling. Before high school, Bromley wrestled for the Louyaa Predators. Mike Bromley, his father, was a state champion at Damascus High School, and he was part of the reason that Michael started wrestling.

Mike Bromley said he tries to come to all of the matches and be cheerleader rather than a critic.

“The two things that got Michael to where he is today are hard work and mental toughness. This accomplishment  is just another reason for me to be proud of him. He earned it,” said Mike Bromley.

Michael’s twin brother Joey also wrestles for Linganore and is a two-year captain. Joey wrestles at the 170-pound weight class and placed third at last year’s state tournament. Joey currently has 90 wins, chasing the same milestone. Joey said he believes in Michael and thinks that all the effort Michael puts in shows.

“It was cool to see him reach this milestone because it is a testament to his hard work,” said Joey.

After high school, Michael hopes to study mechanical engineering or business at one of the four military academies and to wrestle there as well. Bromley also plays football and lacrosse for Linganore.