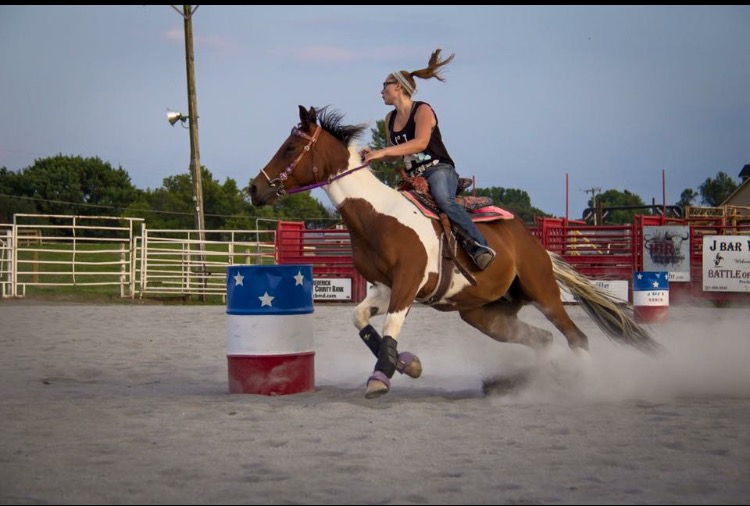 Senior Jackey Hinkson competitively barrel races for the Maryland Western Horse Association. She is a rising star on the youth circuit, completing the challenge in about 14 seconds. She practices 4 times a week in the summer and twice a week in the winter.

In barrel racing, the contestants race around three barrels in a clover leaf pattern in as little time as possible. Hinkson’s best time is 14.53 seconds.Her best time for pole bending, which is another rodeo competition, is about 20 seconds. She’s won fourth in the youth division finals.

Hinkson’s current horse, Bandit, does pole bending and barrel racing, two very dangerous rodeo events. Barrel racing requires a horse to make sharp turns, and since most arenas have stone dust on the ground the horse can slip or the rider can fall off. Barrel racing is not technically considered a sport, but Hinkson said, “I think it’s a sport because I’m controlling a 1,300 pound animal.”

The horse she currently races is a 10-year-old paint named “Bandit.” Her favorite part of barrel racing is the bond between her and the horse, but her least favorite part is the entry fees because they are so expensive, even with prize money she has won for events. Typically, she pays about $70-75 per event.

More expensive than the entry fees is the physical cost. Hinkson has been injured multiple times. Once, on a horse with a skittish temperment, the horse was scared by loud noises–typical of a rodeo.

Hinkson said,“My horse threw me off and finished the pattern without me.” Hinkson has had broken ribs and a broken ankle. Her horse has stepped on her feet multiple times, and once she even got a concussion.

Even though it is dangerous, Hinkson never gets scared.“I love the adrenaline rush.”

She started barrel racing at just eight years old because it looked fun, and she had a lot of friends who barrel race.  Most kids who love basketball are labeled “gym rat.”  Hinkson’s a “ring rat.”

She isn’t the only person at Linganore who barrel races. Kelsey Wolfe and Aubrey Knott also barrel race.

Hinkson has had plenty of support develop her riding and barrel racing skills. Her first horse she trained on was Cloud.He was a “project” horse, which she later purchased after the horse was retired. Hinkson’s current horse Bandit is her partner when training with Paige Reynolds, an East Coast champion barrel racer.

Hinkson’s aunt, Amanda Rhinehant, taught Hinkson how to ride and is very involved with barrel racing. Rhinehant lives on a 10-acre farm and she barrel races as well. Her best time is 16 seconds, and she currently rides her horse Lulu.

Though she wouldn’t consider it a future career, Hinkson is teaching younger girls and their horses how to barrel race.

Hinkson is the third generation to live on Turn n’ Hitch Farm, a family farm with 12 acres. On the farm, Jackey’s family has eight horses, a few pigs, and chickens.