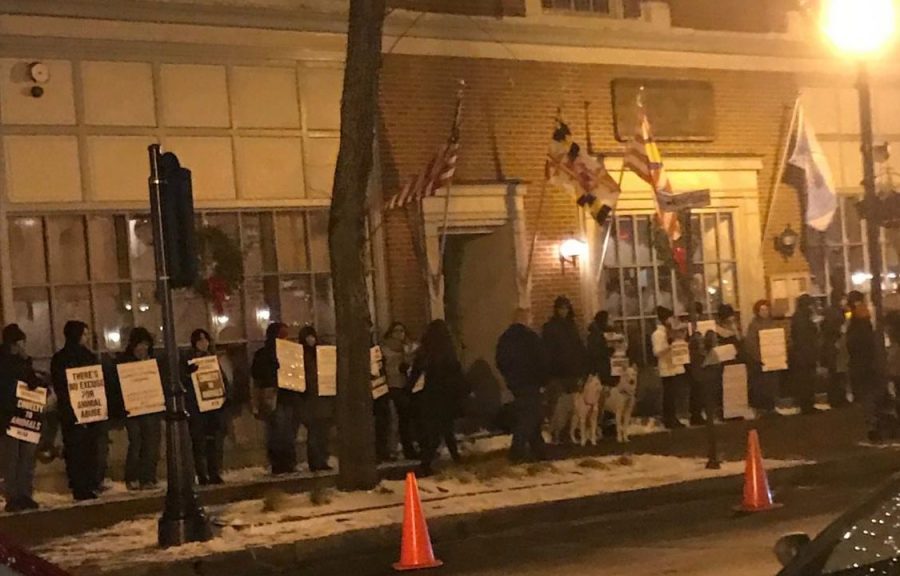 Protesters seen standing at the pick up and drop off area for the carriage rides.

On December 29, 2017, North Market Street was filled with bright white signs held by protesters standing silently in the freezing cold. A local animal rights activist group lead by Michael and Stacy Boyer protest the use of horses as carriage haulers.

I do not agree with the recent protests against the horse drawn carriage rides in downtown Frederick.

Horses have been used to transport humans for centuries. The earliest sort of horse drawn carriage dates back to 2000 BC that was used in Mesopotamia and called a chariot. Horse drawn carriages were the main form of transportation until the 20th century.

According to the Equine Heritage Institute, the horse was used for herding, warfare, transportation, communication, agriculture, trade, commerce, pleasure, sport, religion, symbol, status, gift, industry, competition, and recreation ever since mankind and equine met. Present day work horses are seen around the world in the military, police force, plowing farms, special funerals, and of course in carriage pulling.

Today, carriage rides have become an industry and are used as a tourist attraction in cities all over. Holidays, city tours, and special events have adopted this unique, old-time tradition.

Lambert’s Carriage Company has been in Frederick for six years offering seasonal carriage rides around downtown Frederick. In recent seasons, their efforts have faced a backlash. Jessica Lambert and her father have had the mules and horses for over 14 years to show and drive for pleasure before starting their carriage company. Aside from downtown Frederick tours, their carriage company offers carriage services for weddings, parties, and special events all year long.

Protesters argue that these carriage rides are “animal slavery” because it is unsafe and that horses should not be used as machines or for our entertainment. Animal rights group, PETA, argues that exhaust fumes and hard road surfaces are dangerous to the animals and that busy streets filled with cars are an “accident waiting to happen” with the carriage horses. These groups advocate for an electric alternative to horse-drawn carts.

“I am a large animal veterinarian, and I have dedicated my life to the well being of animals. It is extremely upsetting and offensive when someone questions the well-being of my beloved horses and mules,” said Lambert, in response to the recent protests against the carriage rides.

These animals are treated very well, if not better, than average horses and mules to keep them in perfect condition to do their job. Not only are they loved by their owners, but they are adored by the regulars who come back year after year just to see these iconic animals. These animals are seen and treated as pets, not machines.

“I feel like the protesters are very uneducated about the horses and their treatment.  Our animals are pets–they live in a large field with free choice, high quality hay and water. They are given grain daily and are groomed and loved on regularly.”

In New York City, the anti-carriage ride protests are much more serious. Protesters crowd the streets and target children and tourists on the carriage rides, yelling and showing graphic images of dead horses. These protesters have crossed the line into harassment and have turned violent on multiple occasions leading to arrest.

According to Daily News New York, New York city Mayor Bill de Blasio pledged to limit carriage rides in New York City. Animal rights groups fought to get him elected and were extremely disappointed to see he did not follow up with his promise. The New York City Council canceled a vote on his bill to limit the rides, despite his personal pleas.

Beside the protests, no other actions have been taken against the carriage rides in downtown Frederick. The Lambert Carriage company plans to continue carriage rides downtown for as long as possible.

Con Carriage Ride- A cruel and outdated method of transportation

An animal rights group led by Michael and Stacy Boyer have been protesting against the Lambert Carriage Company seasonal rides in downtown Frederick.

I agree that horse drawn carriages are a cruel and outdated way of transport in busy cities. Not only is it inhumane, but it’s dangerous to the horses and others.

Horses are traveling on pavement all day long, which can be detrimental to their joints and hooves. They also can face respiratory problems from breathing in exhaust fumes from all the car traffic and even drop dead from heat strokes.

According to PETA, a carriage horse named Max collapsed in New York City during a carriage tour in 2017. His owners claimed he “tripped” but a bystander said that the horse was breathing heavily before he collapsed.

Horse drawn carriages can also pose a threat to nearby drivers, civilians, and the passengers in the carriage. Horses are animals that have a “flight” mechanism rather than “fight” when facing a dangerous situation. Animals and people can be seriously hurt when a horse is spooked and runs amok.

Fox News covered a story that took place in December 2017 when a horse drawn carriage collided with two cars. The horses got spooked and ran out of control with eight people on the carriage ride.

Glee actress, Lea Michele, has also raised her voice against the cruelty in horse drawn carriages. She created a video that takes a first hand look at the suffering carriage horses endure.

Biloxi, Mississippi; Camden, New Jersey; Key West, Palm Beach, Pompano Beach, and Treasure Island, Florida; and Salt Lake City—have already banned horse-drawn carriages. The only way to put an end to this abuse is to continue protesting and contact local legislators to encourage them to sponsor a ban against carriage rides.

Michael Boyer, a vegan, is active on Facebook, sponsoring events and petitions to change animal cruelty laws. On his Facebook page, he sponsors “Rise Up Shut it Down” and “Cube of Truth,” events that work to end animal farming.

According to the Frederick News Post, the Boyers plan to continue protesting for “as long as necessary.”  If you love animals, you should partake in the protests next carriage ride season in Frederick.